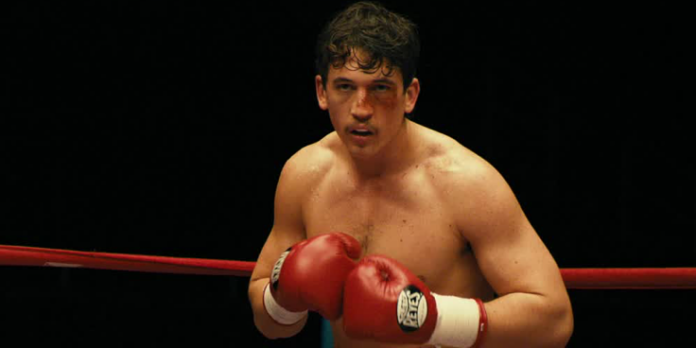 THE STORY – Vinny “The Pazmanian Devil” Pazienza (Miles Teller), a local Providence boxer, shoots to stardom after winning two world title fights. After a near-fatal car accident leaves him with a broken neck, he is told he may never walk again. Against all odds and doctor’s orders, renowned trainer Kevin Rooney (Aaron Eckhart) agrees to help Vinny return to the ring just a year after the accident for what could be the last fight of his life. Based on a true story.
​
THE CAST – Miles Teller, Aaron Eckhart, Katey Sagal, Ciaran Hans & Ted Levine
​
THE TEAM – Ben Younger (Director/Writer)
​
THE RUNNING TIME – 117 Minutes

​Have you ever seen “Rocky?” How about “The Fighter?” How about last year’s “Creed?” The problem in today’s filmmaking landscape is that the boxing genre has been done to death no matter how inspirational, no matter how engaging, no matter how well constructed it may be. That is exactly the problem I have with “Bleed For This.” While it’s well acted, well constructed and certainly inspiring based on a true story which if made up would almost sound cliche, “Bleed For This” suffers the same fate as another recent boxing film “Southpaw.” Without trying to sound disrespectful (I quite enjoyed “Creed” last year) the genre is struggling to find new and creative ways to tell the stories from both within and beyond the ring.

Based on a true story, the story of Vinny Pazienza (Miles Teller) takes place in the late 80’s into the 90’s, where after losing the Junior Welterweight title to Roger Mayweather and training to get it back with washed-up boxing trainer Kevin Rooney (Aaron Eckhart), Vinny is involved in a near-fatal car crash that leaves his neck broken. With the aid of his parents (Ciaran Hinds & Katey Sagal) and his determination to get back into the ring, Vinny starts a long road to recovery. He opts to wear a halo around his head instead of going for spinal fusion surgery. The risk is great, for one fall or bump could mean paralysis for the fighter from Providence Rhode Island, but Vinny has never been one to give up and is not going to start now as he attempts to gain back the title of “champion.”

Performances in “Bleed For This” are pretty solid. Miles Teller physically gives a performance unlike any he has done before. Emotionally, the best way I could describe him in this movie is if his character from “Whiplash” was more ripped and instead of having obstacles thrown at him by J.K. Simmons, it was life itself he was battling. Aaron Eckhart plays the tough boozing trainer who gives finds inspiration in Vinny’s own determination. Packing on pounds of fat and sporting a balding head, Eckhart disappears into the role reminding us why once again he’s one of our most underrated actors. The surprising emotional center of the film which I’m surprised I haven’t heard many of my colleagues single out though is Ciaran Hinds as Vinny’s devoted father, even though as a husband, he may be lacking.

Vinny’s home life is explored through multiple dinner table conversations and even though we are well aware that his father is not fully devoted to his wife, poor Katey Sagal is regulated to the background for most of this movie with very little to do. An actress as talented as she is deserved a lot better here, especially when all of the men have something interesting to do in the film dramatically. And make no mistake about it, “Bleed For This” is a masculine film. The movie drips, blood, sweat, tears, and heart until you wake up and realize that the character of Vinny Pazienza is quite self-centered and a bit of an asshole to nearly everyone around him. It’s not until 40 minutes in when the film hits a dramatic turning point that Vinny is finally humbled by life and the prospect of never being able to fight again that we finally start to feel some sympathy for him and a huge part of that is credited towards Miles Teller’s performance.

“Bleed For This” utilizes every boxing movie cliche in the book, from the alcoholic trainer to the rough family life back home, to the “never say die” comeback attitude, the story of “Bleed For This” despite being true, is actually quite thin. To his credit, writer and director Ben Younger finds many ways other than the performances to inject some excitement into the film such as creative sound mixing, brisk editing (Yes, there is a training montage. Like I said, every cliche in the book) and an in your face soundtrack featuring many popular songs to catch one’s attention. It’s not a game-changing film for the genre. It’s just yet another solid entry into a genre that is growing tiresome with each passing year.​