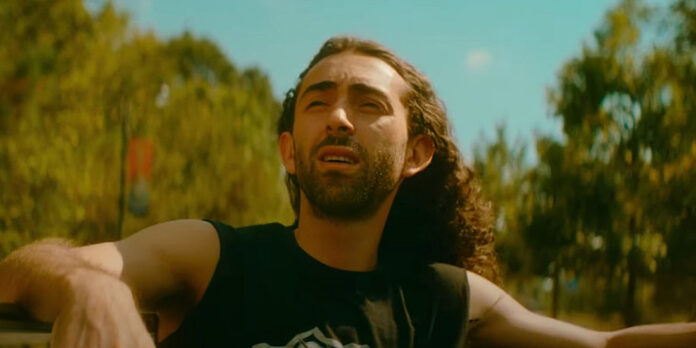 THE STORY – On the cusp of the year 2000, Colombian brothers Carly (Mateo Arias) and Mateo (Moises Arias) prepare to move to the United States for their last years of high school. Metalhead Carly has his heart set on attending the Georgia Aerospace Institute and working for NASA, while his supportive parents (Diane Guerrero and Wilmer Valderrama) seize the chance to escape the political turmoil in Colombia and chase the American Dream. At first, Mateo is the only one to express any cynicism, but when the reality of their new life sinks in, the family struggles to adapt as their expectations are shattered. When events threaten to derail their future, Carly’s dream becomes his only lifeline.

Even when a film occupies familiar territory that has been seen multiple times in the past, there still remains potential for the execution to be somewhat compelling. Tried and true stories may appear derivative on the surface, but some paths can be taken that infuse such narratives with some innovation or unique perspective. The new film “Blast Beat” most certainly operates in some well-known trappings regarding coming-of-age films, but it also inhabits a viewpoint that makes it special from a cultural perspective. Unfortunately, despite some decent turns from the cast, the results leave a minor impact, and not much is made to make this a distinguished work.

The film centers on a Colombian family as they attempt to make a new life in America in the late 1990s. Moving from their homeland in the throes of civil unrest, they relocate to Georgia, where the eldest son Carly (Mateo Arias), an intelligent metalhead, has ambitions to get into a prestigious college that will eventually land him a job at NASA. His wayward brother Mateo (Moises Arias) is much more the black sheep, prone to violent outbursts and resentful of the major move that seemed to disregard his own feelings. The two brothers attempt to adjust to their new surroundings, but it is not an easy task. The challenges they face test not only their fortitude to survive a culture shock but also their familial bonds as they yearn for a slice of their own identity.

Initially, there does seem to be some promise shown at the start of the film for something that can prove quite intriguing. Director Esteban Arango, making his feature film debut, starts right away with a kinetic energy that is captivating to watch and lures one into the sense of a vibrant world. However, much of that momentum gives way, and the pacing becomes inconsistently engaging. While there are occasional flares of impressive stylization, the filmmaking prowess never remains constant to be thoroughly engrossing. Arango does a good enough job for a first outing to keep things moving as best they can, but the moments where one can truly marvel at the direction are few and far between.

Unfortunately, most of the issues are at the hands of the screenplay by Arango and Erick Castrillon. The bedrock foundation here is a reasonably pedestrian family drama, with a young person’s journey toward self-discovery containing the most thematic weight. Sadly, even with these topics being cast through the lens of an immigrant story, the conflicts at hand are apparent and not that dissimilar to countless other films. The dynamic between the brothers is earned, but they are the only characters given any real kind of complexity. The storytelling never manages to take any opportunity for innovation and instead opts for predictable beats that quickly become tiresome. A stunted finale that feels rushed and incomplete only further exacerbates the hollow core of this pretty mundane tale.

Perhaps the two brothers being played by real-life siblings is what creates such a genuine comradery between the two actors, which is much appreciated when viewing their interactions. Between the two, Moises is the more impressive performer, capturing a menacing harshness that works as a hardened shell over a tender and emotional center. He delivers by far the most fascinating performance in the film with a magnetic screen presence that captures angst and fragility. Mateo’s Carly actually comes across much more blunt, and as such, his portrayal is more divisive. There are moments when he gives a heartfelt turn, but the complexity isn’t really shown with his character, and that limits his impression. Most of the supporting players are not particularly significant, except for Diane Guerrero and Wilmer Valderrama as the parents. The latter does have a warm, paternal aura that is effective, but he does not have much screen time. Guerrero is good in her scenes but embodies an underwritten character, so her role is minimally meaningful. Daniel Dae Kim also shows up as a potential mentor to Carly for what it’s worth, but it’s a role that completely wastes him and offers very little substance.

Unfortunately, there just isn’t much to “Blast Beat” that distinguishes itself as a unique entry to a parade of nearly identical stories previously seen. The thematic explorations are overly familiar, and the conflicts are not particularly interesting or enticing. The filmmaking aesthetics start strong, but soon the energy dissipates, and the execution is generally flat. Most of the performances are merely serviceable, except for an inviting turn from Moises Arias. At the end of the day, there’s not much here that is downright terrible, but the mediocre results do not give the film any staying power either.