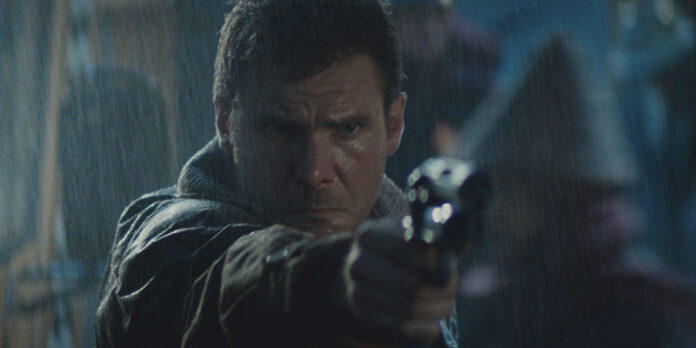 ​THE STORY – Deckard (Harrison Ford) is forced by the police Boss (M. Emmet Walsh) to continue his old job as Replicant Hunter. His assignment: eliminate four escaped Replicants from the colonies who have returned to Earth. Before starting the job, Deckard goes to the Tyrell Corporation and he meets Rachel (Sean Young), a Replicant girl he falls in love with.
​
THE CAST – Harrison Ford, Rutger Hauer, Sean Young & Edward James Olmos

​”Blade Runner” stands as one of the great science fiction masterpieces of all time. It has been renowned for its world-building, characters, visuals, score and concepts. Nearly every aspect of Ridley Scott’s 1982 neo-noir classic has been hailed over the years and much of it has to do with how much “Blade Runner” leaves open. If you watched the theatrical cut on its own, it is clear to see how one would be enticed to want to spend more time within this world that Philip K. Dick created, based on his novel “Do Androids Dream of Electric Sheep?” With each subsequent release by director Ridley Scott, “Blade Runner” has been edited, re-shuffled and re-done so much that it has offered its fans even more in terms of discovery and interpretation. Here we are, 35 years later and we still do not know whether Deckard is a replicant or not. What does it matter in the end?

It’s November 2019 in Los Angeles. It is an industrial city, with a darkened sky, where it rains all day and night. The streets are filled with the homeless and poor while the Tyrell Corporation continues to make replicants: robots that are “more human than human.” When the Nexus 6 Replicants, who were once being used for space labor, mutiny and turn rogue, it is up to Blade Runner Rick Deckard (Harrison Ford) to execute the replicants, or as they say, retire them. The replicants are designed to be just like human beings, except they have a larger capacity for strength and agility. They don’t have emotional responses and are only given a 4-year lifespan.

Ridley Scott did a brilliant thing in 1982 in that he took the film noir genre and placed it within a science fiction universe, that is meant to represent our own future. Vangelis’ iconic ominous music opening perfectly sets the stage for what is sure to be a dangerous yet wonderous adventure. We then notice the bleak visuals of a city overrun by industry and darkness. It’s a time and a place where technology runs everything, poverty and globalization have spread far, and there does not seem to be much hope, as evidenced by the constant darkness and rain. The cinematography by Jordan Cronenweth is some of the most striking ever, with his use of shadows, neon lights for outdoors and bright lights that cut through the interiors of the sets. The production design by Lawrence G. Paull and art director David Snyder is some of the most memorable in cinema history and forever had an effect on how dystopian futures were portrayed on film. From the costumes to the sound, to the visual effects, which still hold up till this day, “Blade Runner” is a technical marvel that has not lost any of its power to immerse you into its world.

Another area where “Blade Runner” succeeds is with its concepts and ideas surrounding what it means to be human. The film boils it down to memories and emotion. These are the two qualities which separate replicants from humans. But it is so much more than that. There is also talk of what does it mean to truly live, looking into the eyes (There is a lot of eye imagery within this film) of one’s soul and meeting your own maker that helps to give “Blade Runner” enough ideas to discuss for decades. And that is exactly what we have done. We have tried to take the rules which the film has presented to us and apply them to the characters within the film, despite not knowing much about some of them and even to our own lives. Every character has a backstory shrouded in mystery with enough intrigue to make you want to care about who they are, whether they are human or not.

Surprisingly the performance that makes us feel this way the most is not Harrison Ford’s but Rutger Hauer’s performance as the replicant who is wishing to live longer than his programmed 4-year life expectancy, Roy Batty. What a deranged and layered performance this is. In today’s world, I’m sure the Academy would have found room to reward the actor with a nomination for his work in the film. Even when it gets to the third act and some begin to complain how Hauer’s performance starts to transition into camp, I disagree. His final showdown with Dekkard in the house is the stuff that nightmares are made of. This could only be achieved with such an imposing presence as Hauer gives off as Batty. Same can be said for his now famous monologue at the end of the film, which remains one of the most beautiful and moving moments in cinematic history.

Ford is perfectly fine in the lead role but one has to wonder if his performance is deliberately dry in an effort to propose whether or not Deckard is a replicant. The same argument can be used for all of the other characters, as they behave in mysterious and strange ways, sometimes with little or no feeling at all. Rachel, as portrayed by Sean Young, is a replicant but gives an even more human performance than Ford does at times. Their relationship, by the way, is one of the sore points in a film that when I was younger I used to consider perfect. Their chemistry and lead up to their “love making” scene is forced and awkwardly clunky resulting in a scene where one has to even begin to question if the act of Deckard forcing himself upon her is consensual or not.

Other flaws can be found within the thinness of the storyline. While there are genre conventions which are borrowed from classic film noir and brought over to the science fiction genre, the story of a reluctant protagonist who must hunt down a group of replicants, isn’t particularly interesting in its plotting. Where it does succeed, however, is with its ideas which come from the dialogue and the performances given by the characters. The elaborate technical achievements of the film do a good job in masking what is otherwise a very straightforward story with complex ideas. Also depending on which cut of the film you are watching, it is inevitable that you will find some odd editing transitions between scenes and cuts within, due to how much this film has been tinkered with in the editing room.

“Blade Runner” is the very definition of a flawed masterpiece. Its impact on all other films which came after it is undeniable. The movie contains some of the most extraordinary images, sets, music and ideas ever committed to film. With this and “Alien,” Ridley Scott became known as one of the great directors of the sci-fi genre, a title he keeps attempting to retain with films such as “The Martian,” “Prometheus” and “Alien: Covenant.” Although there are some flaws with the story and the editing of the film overall, there is no denying the enormity of what cinema owes to “Blade Runner.”