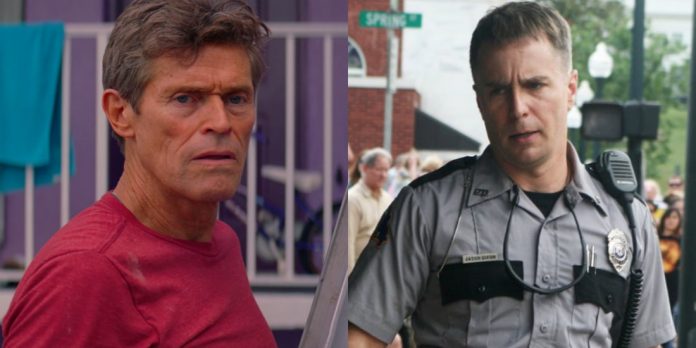 ​One of the few consistent frontrunners this Oscar season has been Willem Dafoe in “The Florida Project” for Best Supporting Actor. Since his film “The Florida Project,” premiered at Cannes, Dafoe was seen as a surefire nominee (and highly probable winner) for his role as the hotel manager with a heart of gold. Still, as the season has gone on, another major contender for the Oscar has gained significant ground: Sam Rockwell in “Three Billboards Outside Ebbing, Missouri.” Now, both these overdue character actors are on a collision course as the awards season rolls on. But who will prevail?​

“Three Billboards Outside Ebbing, Missouri” emerged at this year’s Toronto International Film Festival as a force to be reckoned with. It won the People’s Choice Award there, and many critics and pundits declared it a frontrunner for Best Picture. Rockwell’s performance in the film was widely praised as well. It didn’t take long for him to be seen as a legitimate threat to Dafoe’s win. Now, months later, it’s clear that Best Supporting Actor will be a two-man race.

Both actors have a lot of factors playing in their favor. Neither of them has won an Oscar. Dafoe has had a long and legendary career, and he’s been nominated for two Oscars before, both for Best Supporting Actor. He’s mostly known for playing villains and harsh characters, but “The Florida Project” plays him against type. His performance as motel manager Bobby is kind, sweet, and sympathetic. It’s a great change of pace, and Dafoe is fantastic, even if it’s a somewhat small and naturalistic role.

Rockwell, on the other hand, has not yet received an Oscar nomination. He’s had a fairly long career, though not as long as Dafoe’s, and has stayed a little bit under the radar. In “Three Billboards Outside Ebbing, Missouri,” Rockwell has an enormous role that is layered, complex, and integral to the film. It’s a really showy performance that is sure to stick with audiences both for its comedic and dramatic bits. Add to the fact that he put on weight for the role and there’s no doubt he will receive a lot of overdue attention this year.

Dafoe has had the benefit of being seen as the immediate frontrunner. Since Cannes, the narrative of Best Supporting Actor has been that it’s finally the year that Dafoe will get the Oscar he deserves, capping off a career that has spanned decades. This idea of inevitability will go a long way towards keeping him seen as the frontrunner. Rockwell doesn’t have the inevitability playing in his favor. In fact, some might think that he’ll have another shot at winning an Oscar before Dafoe does. Still, when actually comparing the performances, one might outweigh the other. The smaller and understated nature of Dafoe’s role, great as is it, might not get as much love as Rockwell’s. Also, being the early frontrunner can also cause the conversation to run out of steam.

The performance of the movies themselves in other categories could also help or hurt their chances at winning. “Three Billboards Outside Ebbing, Missouri” is still our frontrunner for Best Picture, though this year has felt like it’s lacking a frontrunner as strong as in years past. Still, it’s expected to receive many nominations across the board, including major categories like Picture, Director, Screenplay, and Actress. “The Florida Project” is a beloved film this season as well, though it’s not likely to pick up as many nominations as “Three Billboards Outside Ebbing, Missouri.” Outside of Dafoe’s nomination, no other category feels as secure. It certainly has a shot at a Best Picture nomination, but no other acting nominations are likely (Though I’ll fight tooth and nail to get Brooklynn Prince nominated). Rockwell will get a boost from the bigger presence that “Three Billboards Outside Ebbing, Missouri” will have in this year’s Oscar race as a result.

There’s a lot playing into Rockwell’s favor over Dafoe, at least on paper. It’s still sure to be a tough race between them for the rest of the season. But what about other contenders? Often a two-man race can split the vote and cause someone else to rise to the top. After Dafoe and Rockwell, it’s a little difficult to pinpoint a third-place contender. Armie Hammer is gunning for his first Oscar nomination for his role in “Call Me By Your Name,” but he’ll be fighting his own co-star Michael Stuhlbarg. Richard Jenkins and Michael Shannon are dueling it out for a “The Shape of Water” nomination. Jason Mitchell is fantastic in “Mudbound,” but he’s also fighting the Netflix stigma as well as his other co-stars who are also being campaigned in Supporting. Dafoe and Rockwell don’t have a clear-cut challenger to the two-man race, but it’s likely that Armie Hammer’s profile and the love for “Call Me By Your Name” will continue to rise as the season goes on.