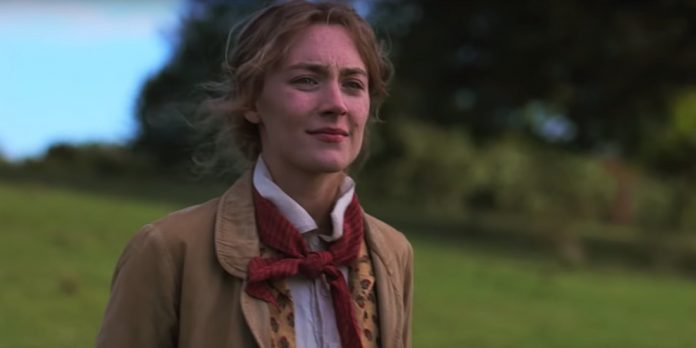 In an awards season without any real certainties, Best Actress might be the most confounding category of them all. Our own Ryan C. Showers wrote an excellent breakdown of the category last week, highlighting the three likely frontrunners: Renée Zellweger in “Judy,” Scarlett Johansson in “Marriage Story,” and Charlize Theron in “Bombshell.” He laid out the possible narratives and paths to victory for each of them. He also explained the pros and cons of each. There are plenty of reasons to bet against each of these three women this season, which makes this category all the more confusing.

My pitch: What if in this unpredictable Best Actress race, without a clear frontrunner, we’re underestimating someone who could win the whole thing? ​

​Before I lay out my case as to how Saoirse Ronan could win for “Little Women,” let me admit this up front: I know it’s a long shot. Still, I don’t think it’s out of the realm of possibility. While Zellweger, Johansson, and Theron are the safer bets, it’s possible that Ronan could play this divided field to her advantage. “Little Women” has been making the rounds over the past few weeks, playing to critics groups and voting bodies across the country, helping to overcome its late release date, much like “Bombshell.” While critics seem less enthusiastic than they were for Greta Gerwig’s previous film “Lady Bird,” it’s still receiving plenty of praise. From all accounts, Ronan delivers a standout performance and feels like a safe nomination.

With three Oscar nominations before her 24th birthday, Ronan is one of the most critically acclaimed actors of her generation. We all know it’s just a matter of time before she wins an Academy Award. She’s clearly beloved by her fellow actors, by the Academy at large, and by the HFPA, where she won a Golden Globe for “Lady Bird.” Many years of working the crowds and campaigning for awards, Ronan has never stumbled into controversy. On the contrary, she seems to win over everyone, even the ever-fickle Film Twitter. Could she ride this wave of support to her first win this year, surpassing the perceived early frontrunners?

Zellweger benefits from doing the most acting. She’s settled deeply into Judy Garland’s skin and has so many emotions to traverse. She’s crying, she’s singing, she’s yelling, she’s drunk, she’s in love, and more. It’s a very classic Oscar-winning performance. Still, with the September release date and buzz, that has certainly slowed down, they both put that win into question. She’s also already an Oscar winner. This may be seen as a comeback role of sorts, but there’s not really an “overdue” narrative for an actress who has already won. She’s really a frontrunner by default at this point, and it’s hard to see Zellweger becoming a critics favorite.

Like Zellweger, Theron also plays a real person (which always boosts the Oscar chances), except this time it’s Megyn Kelly. She’s controversial and political, which could be a turn-off to some voters. A similarly controversial political figure covered in prosthetics was nominated just last year: Christian Bale playing Dick Cheney in “Vice.” That film, however, was explicitly exposing the wrongdoings of Cheney. “Bombshell” presents a more mixed view on Kelly, one that could be hard for some voters to reconcile. Still, there’s no denying Theron’s uncanny portrayal of Kelly. This could also be the first true “Me Too” film in play at the Oscars, and that carries a great deal of weight. Like Zellweger, Theron is also a previous winner for a similarly transformative role. No overdue narrative here.

Johansson could play the overdue card, though. Despite being the highest-grossing actress of all time, she’s never been nominated. That’s a little misleading, though, since she’s generally steered clear of Oscar movies up until this year. Her only close-calls were for “Lost In Translation” fifteen years ago, or for a voice-only role in “Her.” No real snubs to point to. She’s undeniably good in “Marriage Story,” though more praise seems to be heaped on her co-stars Adam Driver and Laura Dern. As many have pointed out, the film itself leans more to the side of Driver’s character than Johansson’s. This, along with a somewhat muted campaign presence than would be expected, and her continued history of press gaffes, aren’t things that can be easily swept under the rug.

In light of that, I keep coming back to Ronan. She has two main issues on the path to a win: First, the release date, and second, her own filmography. “Little Women,” somewhat confusingly, skipped all the fall festivals, opting for a late December release. Many rightfully point out that this robbed the film of potential snowballing buzz. Still, it’s being screened now for all the major groups and will meet every voting deadline. Second, while reviews have indicated that Ronan is indeed very strong as Jo March, there are some who don’t believe she has topped her work in “Lady Bird” or “Brooklyn.” It may create a perception within voters that their votes may count more elsewhere, especially if they assume she’s “safe.”

“Little Women” will surely make respectable money this holiday season, which will raise the film’s profile right in the heart of the season. The public at large will likely be more familiar with “Little Women” than any of the other three frontrunners, despite entering the race late. Though many groups will have released their nominees and winners by the time “Little Women” opens wide in theaters, the Academy doesn’t begin voting until January 2nd. If critics groups are scattered between the three perceived frontrunners, Ronan may strike at exactly the right time.

With its phenomenal cast, “Little Women” could easily score a SAG Ensemble nomination. As Ryan pointed out in his piece, the addition of AFTRA to the SAG Awards has turned it into a bit of a popularity contest in some ways. While Johansson is, of course, the biggest star, Ronan may have the biggest movie at that point.

Despite all the above, there are plenty of reasons to bet against Ronan. She’s certainly got an uphill battle towards a win this time around. Even so, this Best Actress race doesn’t seem to be getting any clearer, and the critics’ awards aren’t likely to help that. Critics awards can often craft a consensus, but last year proved that anything can happen. While Zellweger, Johansson, and Theron battle it out, Ronan and “Little Women” might just be waiting to strike, providing some clarity this Christmas time. It’s a long shot, but it makes some sense to me in this wild Oscar season.

Do you think Saoirse Ronan will be nominated for Best Actress at the Oscars for “Little Women?” Who do you currently have predicted? Let us know your thoughts in the comments section below or on our Twitter account.