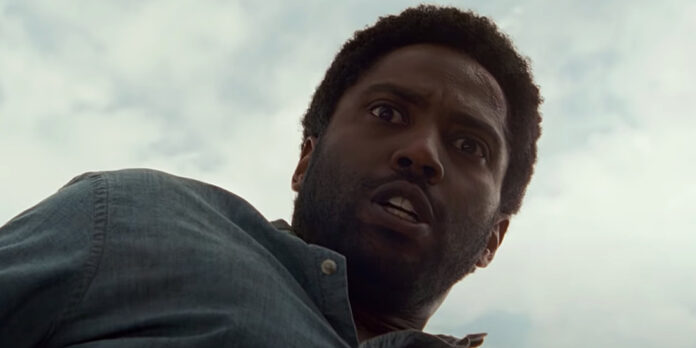 THE STORY – Following a tragic car accident in Greece, Beckett, an American tourist, finds himself at the center of a dangerous political conspiracy and on the run for his life.

​”Beckett” has a promising enough premise but fails to be adequately thrilling. With direction and a story by Ferdinando Cito Filomarino and a script by Kevin A. Rice, it follows its titular character after becoming the target of a manhunt while on vacation in Greece. He’s on the run for most of the film, attempting to reach the safety of the American embassy and getting mixed up in political intrigue and conspiracy. Unfortunately, it’s pretty unengaging for a thriller and definitely doesn’t live up to the films it’s clearly trying to imitate.

The film opens with an American couple, Beckett (John David Washington) and April (Alicia Vikander), on vacation in Greece. There’s an elongated montage of them exploring together that tells us very little about them as characters, other than that they are in love. Then, while driving at night on an empty road, Beckett falls asleep at the wheel and crashes their car. In the wake of the crash, he sees something that he shouldn’t have that will put his life in danger. Waking up in the hospital, Beckett is confused, and not only because of the language barrier. The film doesn’t use subtitles to translate the Greek being spoken but instead lets the audience be as lost as Beckett is. When he returns to the crash site to gain some clarity or closure, he is suddenly shot at and thus begins a lengthy search. Beckett gets involved in drama with a far-right political party, a young boy’s kidnapping, and a corrupt police system.

Beckett spends most of the movie simply running from the people who are trying to kill him. He isn’t your typical action movie hero; he’s fairly out of his depth and continues to trust people that he definitely shouldn’t. On the other hand, he’s able to keep going despite sustaining a considerable amount of injuries. By the end of the film, he finally comes into his own and starts making active choices rather than just reacting to things happening to him.

The movie is watchable, just not remarkable. Sayombhu Mukdeeprom’s cinematography is strong, as is Ryuichi Sakamoto’s score, even if it occasionally slips into being overdramatic. However, it felt longer than its modest runtime, and some sections were a bit tedious. Because most of the film is spent with Beckett on the run and no one’s motives are thoroughly examined, it can feel repetitive.

Vikander has such a small role in the film that it’s almost laughable to see her being used to promote it. Similarly, Boyd Holbrook has a brief appearance as an employee of the American embassy. Vicky Krieps makes the most noticeable impact of the supporting cast members as a political activist who helps Beckett, but even she isn’t given much to work with. Washington himself spends most of the film flitting between looking shocked and confused. He does have a handful of more emotional beats as Beckett tries to process what has happened to him and what he’s lost. But Beckett isn’t a character with much depth, leaving Washington with a satisfactory performance, but nothing special.

“Beckett” is a fairly standard thriller with a thin plot. It seems to want to initiate other films in its genre, even those of Hitchcock, but it never rises to the challenge. It’s adequately made, and nothing in it ever crosses into the territory of being a bad movie. “Beckett” is simply the kind of film that you’ll likely forget about the week after you watch it.