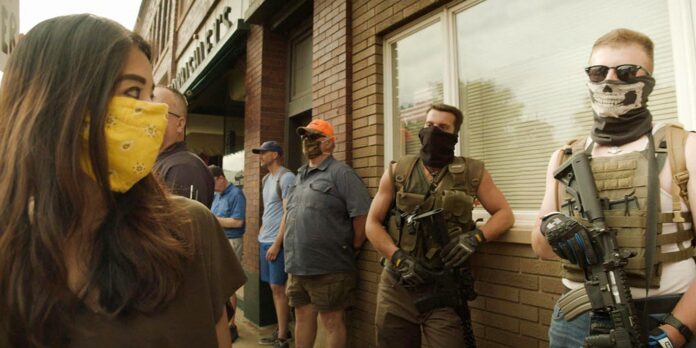 THE STORY – A real-time portrait of 2020 unfolds as an Asian American family in rural Michigan fights to keep its restaurant and American dream alive.

Does anyone want to revisit 2020? Unless you were the CEO of a mask manufacturing company or were able to obtain a fraudulent PPP loan, the answer is “probably not.” So, the premise of “Bad Axe,” the new documentary by David Siev, may not sound like the best way to spend an hour and 40 minutes. But wait, I implore you to be brave and give this movie a chance; it tells a story that’s ultimately much more inspiring than harrowing. In fact, “Bad Axe” may be the best time capsule of the worst year that most of us have lived through, painting a portrait of resiliency and family bonds that’s uniquely American, for better and for worse.

Siev’s camera captures a supremely well-known location to the filmmaker: his family’s restaurant Rachel’s, a traditional American bar and grill located in Bad Axe, Michigan. Beginning in March 2020, David and his older sister Jaclyn have moved back home to help work at the eatery, along with their other sister Raquel, their mother, Rachel, and their outspoken father, Chun. The patriarch fled the Cambodian killing fields in his youth with his mother, settling in Michigan. The documentary depicts the turbulent year as the family faces troubles of all sizes, from slow business to a shocking local rise in neo-Nazism.

Obviously, the director has an intimate knowledge of his subjects, which is to the film’s benefit. It would’ve been easy for the movie to become so personal as to be incomprehensible to outside viewers. But instead, Siev threads the needle between capturing his family members in a familiar light while also giving the audience a charitable guide to each one. In fact, the first half of the film spends enough time on every family member individually that, before it’s even obvious, the audience is innately knowledgeable about each of their personalities and traits. Siev confidently builds the base of “Bad Axe” around them, not unlike how a well-made fictional ensemble film establishes its characters early on so that later, they can all operate quickly and clearly.

As can be expected given the period it depicts, the film becomes quite harrowing and difficult to watch. After a few stressful but manageable months at the beginning of the pandemic, the summer brings the Black Lives Matter protests that defined the year just as much as COVID. The family faces a dilemma when they wish to support the movement for racial justice, well aware that a good portion of their customers in Trump-friendly Huron County may take issue. Jaclyn, the family’s firebrand daughter, puts these hesitations aside when she not only attends a protest march but bravely confronts gun-wielding Nazis in tactical gear. Here, the film finds its voice, as Siev doesn’t shy away from capturing his family’s internal strife and uncompromisingly shows the threats and intimidation they face because of their steadfast support of the movement. It’s as tense and ultimately narratively satisfying as the best dramatic film.

Because of the film’s nature, Siev doesn’t employ a very cinematically compelling style, opting instead for on-the-ground style documentation. His camera takes in so much of what would go on to define 2020, and in doing so in as personal a manner as possible, he may have captured the ultimate filmed record of the struggles many Americans went through in that awful yet important year.

<b>THE GOOD - </b>Director David Siev's portrait of his family's restaurant may be the ultimate filmed record of 2020. By capturing such a personal story, he's able to paint a relatable portrait of the struggles many Americans went through in that terrible yet important year. <br><br> <b>THE BAD - </b>By its very nature, it isn't filmed in the most cinematically compelling way, opting instead for grounded realism. This is far from a negative point, but some viewers may find the style uncompelling.<br><br> <b>THE OSCAR PROSPECTS - </b><a href="/oscar-predictions-best-documentary-feature/">Best Documentary Feature</a><br><br> <b>THE FINAL SCORE - </b>8/10<br><br>"BAD AXE"