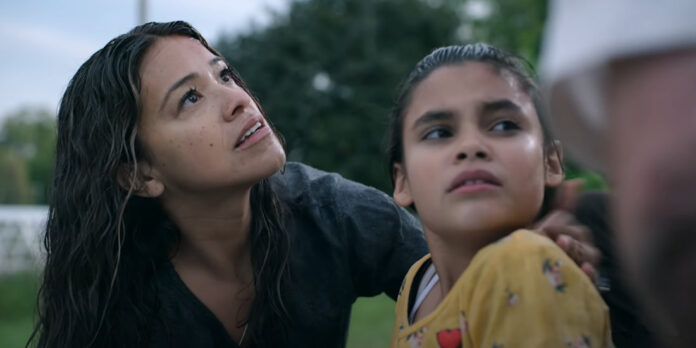 THE STORY – Global hysteria ensues after a mysterious catastrophe wipes out all electronics and takes away humanity’s ability to sleep. Scientists race against the clock to find a cure for the unexplained insomnia before its fatal effects eliminate the human race. When Jill, a former soldier, discovers her young daughter may be the key to salvation, she must decide whether to protect her children at all costs or sacrifice everything to save the world.

When a global event makes all electronics stop working and prevents people from sleeping, chaos quickly erupts. Mark Raso’s “Awake” focuses on how people slowly begin losing their cognitive abilities from the lack of sleep and turn on each other. The script, by Mark and Joseph Raso, follows the family of a young girl who appears to be the only one able to sleep. Helped by an intense score that does much to build suspense, the intrigue starts from the movie’s first moments.

Jill (Gina Rodriguez) is an ex-soldier with a murky past whose teenage son Noah (Lucius Hoyos) and young daughter Matilda (Ariana Greenblatt) live with their grandmother (Frances Fisher). She has a mysterious connection with psychiatrist Murphy (Jennifer Jason Leigh) that is a mix of gratitude and distrust. When all hell breaks loose, and it’s discovered that Matilda is potentially one of the only people on Earth able to sleep, she is in danger as people want to experiment on her — or sacrifice her. The family goes on the run, even as Jill wonders how much time they have left.

The movie is more disturbing than it is scary, with the frightening concept outweighing the intensely violent sequences. That said, there are undoubtedly suspenseful moments as Jill tries to keep her children safe in a world that is falling apart. There are some pacing issues in the first hour of the film as it’s bogged down by unnecessary family moments, but the last half hour suddenly rackets up to a jarring and wild experience.

Young actress Greenblatt is perhaps the best feature of the film. You might know her as young Gamora from “Avengers: Infinity War” or her work on the Disney Channel TV show, “Stuck in the Middle,” and you’ll see her as young Nina in “In the Heights” later this month. She gives a very believable performance as a young child who doesn’t fully understand what is happening around her. Rodriguez and Hoyos also do well, particularly in the latter half of the film as you see them start to unravel from lack of sleep.

Unfortunately, the film is bogged down by multiple plot points that aren’t fully explained, like why Jill’s children ended up living with their grandmother and why she is illegally selling prescription drugs. The ambiguous ending and the weak explanation of what caused the global catastrophe may also frustrate some viewers.

“Awake” is a very theatrical experience overall, with some excellent moments of filmmaking, like the filming of the car crash near the beginning. Another standout moment is a shot through the side mirror of the car that shows a threat approaching. Ultimately, the film feels too scattered for it to be a complete success. Too many plot points aren’t fully explained, and the character development feels shallow. However, “Awake” does offer good performances and an interesting concept that make it worth a watch for those who like this kind of survival story. ​