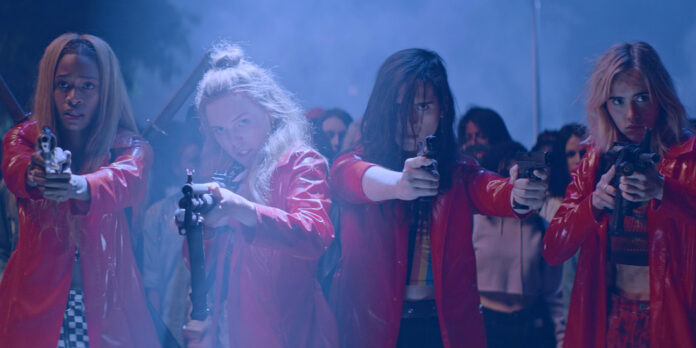 THE STORYHigh school senior Lily and her three best friends live in a haze of texts, posts, selfies and chats — just like the rest of the world. Their small town gets turned upside down when an anonymous hacker starts to reveal personal messages and secrets of thousands of people. As anger erupts into full-blown violence, the four girls soon find themselves in a fight for their lives against an armed mob.

​”I hate the fucking internet.”

Don’t you too at this point? For as great a tool the internet has become for modern society, it’s more clear than ever that it has also become a danger to us all in regards to our standing within the community. How we behave online is who we really are. We believe that the internet does not have consequences but that is not the truth. The truth is that in “Assassination Nation” there are two kinds of people in this world: those who believe that privacy is dead and those still fighting to protect it. We have reached a point where we create personas online, lead double lives, lie to ourselves and to each other. What if all of our guarded privacy and true information via. text messages, photos, emails and more were to come out publically? “Assassination Nation” shows the fallout of such an event from an extreme point of view that is not meant to be realistic but rather, a prophetic warning of the horrors that await our toxic society.

In the fictional town of Salem, 18-year-old high school student Lily Colson (Odessa Young) and her three best friends Em (Abra), Bex (Hari Nef) & Sarah (Suki Waterhouse) are living in a world where a majority of everyone’s personal lives are kept hidden and secret online, including an affair Lily is having with her next-door neighbor, the much older Nick (Joel McHale) who she codename calls “daddy.” When an anonymous hacker starts to leak private information from the town’s mayor and school principal, tensions rise as lives are upended and ruined. A larger hack occurs and the blame eventually gets placed at Lily’s feet. With the entire town mobilized, armed and filled with anger and hatred for those responsible for the hack, Lily and her friends must do whatever they can to survive the night.

“Assassination Nation” is not meant to be high art. It’s meant to be a late night, romp of a blood-soaked, pulp-styled film filled with plenty to say. And the film does have a lot it is trying to tackle in its takedown towards online toxicity, fragile male egos, mob mentality and more. The biggest victim of this is the characters themselves. Of the four leading ladies, Odessa Young and Hari Nef receive the best material to work with and deliver star-making performances in the process. However, both of their characters (And really everyone else) are thinly written and are most of the time either reacting to what is happening around them or are speaking dialogue that enforces the film’s message and themes rather than illuminating who they are as people. Outside of this complaint and the fact that the film is extremely blunt in how it delivers its message to the audience (they even display “trigger warnings” at the start of the film so you know exactly what you’re getting yourself into), “Assassination Nation” contains enough thrills and thought-provoking ideas, that it is not hard to see how this Japanese cinema, 80s exploitation, Quentin Tarantino style influenced film will become a cult classic in the years to come.

A modern-day Salem witch hunt for the age of the internet, Sam Levinson’s (son of Academy Award winner Barry Levinson) second directed film is confident and oozes style over substance. Whether it’s split screen editing to show multiple perspectives at a party, slow-motion to display our obliviousness, upside down shots or an extended single take shot of a home invasion (a virtuoso feat of filmmaking that is more horrifying than anything contained with “The Purge” franchise), Levinson shows that he has enough ideas and creativity to make him a talent to watch out for. “Assassination Nation” will not be everyone’s cup of tea and will surely offend many. That is both its blessing and its curse. Some are simply not ready for a movie to challenge them in such a vulgar, bloody, metaphorical and trashy manner such as this. But maybe, just maybe, that’s exactly what they deserve. The world is not changing anymore. It already has and “Assassination Nation” is the direct wake-up call for those who are still oblivious to that change and are clinging to the past’s values and rules. If this is all a little too serious for you and you don’t believe that the film successfully accomplishes what it sets out to do, you can always still watch it for the “lol’s.”