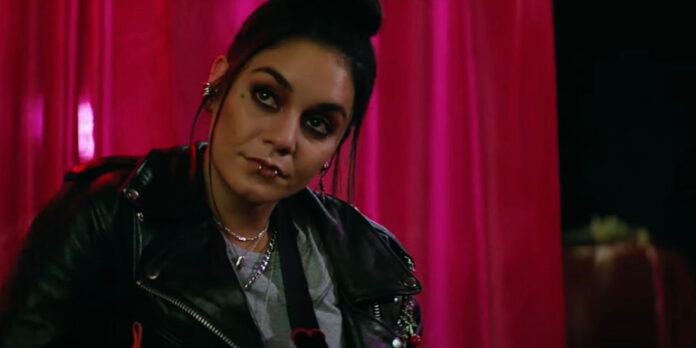 Films that deal with upsetting topics such as sexual assault and harassment are frequent and tricky to execute. They can be presented in different ways. In the Me Too era, we have seen revenge narratives like “Promising Young Women” or compelling dramas like “The Assistant.” Apart from their subject matter, what those two lauded Me Too era films have in common is that they were written and directed by women. “Asking for It” is an apt title for a film of this kind, as that is often the response received by abuse victims. It’s a revenge film with hints of neo-western that follows a group of outlaws, connected by their traumas, out to clean up the streets of sexism and the ideology of male dominance. Empowering sure, but the difference between this film and the aforementioned two is that it’s written and directed by Eamon O’Rourke, a man. This doesn’t automatically make the film bad; many men have directed phenomenal films centering around women. Still, with a film of this subject, this cast, and the scenarios presented, you can’t help but question the kind of depth a woman could have brought to the film.

One of the first signs that something is off with the film is that it stars Ezra Miller, who was seen choking a woman and throwing her to the ground in a video posted online a couple of years ago. But I guess it’s fitting they play the villain. Ezra Miller’s character, Mark Vanderhill, is considered an alt-right “icon” to his many followers. His MFM movement preaches about male dominance and blatantly expresses hatred of women, with videos of Mark showing his followers how to hunt – the prey being the opposite sex. The introduction to Mark and his followers is jarring, presented like an advertisement we never asked to see, and the cutting to Mark and his obnoxiously edited videos continues. The audience cannot enjoy a sweet moment between the film’s main protagonist, Joey (Kiersey Clemons), and her grandparents without Mark’s ideology in our faces. It’s quickly apparent the film’s narrative will be undercut (or perhaps more appropriately, overcut) by horrible editing.

After this almost intolerable introduction to Mark and MFM, the scene shifts to one of a much lighter tone. Joey’s bike ride to her waitress job is surrounded by a peaceful small-town atmosphere and its friendliness. When an old friend, Mike (Casey Cott), walks into the diner, she’s happy to catch up, and he invites her to a party. After getting a little too drunk (or has something slipped in her drink… that’s never specified), Mike sexually assaults her. It’s shocking to think that even someone Joey trusted could do that to her, and how that event affects her is captured excellently. She’s unable to see things clearly at first, like she’s waking up from a disorientating nightmare. Then, it sinks in. Women are made to feel like we must deal with our problems, issues, traumas, everything, on our own. We are made to feel that we have no help and are unable to speak out about things like assault because who will help and who will listen? Joey’s world feels like it’s cracking slowly like broken glass. At first, she’s expressionless as the world moves quickly around her. Her innocence is gone, and this shift in her character is immediately felt thanks to the performance of Clemons. She gets angry, she’s agitated, and she sees her abuser in every guy.

The only one who really confronts her about her changing behavior is Regina (Alexandra Shipp), a frequent customer at the diner where Joey works. She’s a switchblade-wielding, cigarette smoking, sports car driving, queer badass, and Joey is drawn to the strength she exudes. Regina introduces Joey to her world. It’s one full of people who are suffering from traumas of their own. She works for Fala (Casey Camp-Horinek) and Sal (Radha Mitchell), who help get people off the streets, give them a safe place to escape bad relationships and help teach self-defense classes. Here, Joey meets the intimidating Beatrice (Vanessa Hudgens) and resourceful Lily (Leslie Stratton), as well as other players like Angie (Lisa Yaro) and Jett (Leyna Bloom). They’re quite the group, but Joey doesn’t really get a sense of what their deal is until after an altercation they have with a guy berating his girlfriend. Then she learns she’s become involved with a group of vigilantes unafraid to stand up to the abuses of the straight, white male patriarchy and actively hunt them down. For someone that’s been so sheltered, it’s inspiring but also frightening at the same time. As the group goes after their next target, Mark Vanderhill, they come to realize that they may have underestimated the situation as they become the ones who are hunted.

With most films that pack in so many characters, it’s hard to flesh them out fully as they’re defined by the trauma they’ve experienced for the most part. This is especially disappointing with Joey as it would have been great to learn more about her before this point, like how she came to live with her grandparents. However, it is interesting to learn how many within the group came to find each other, but some like Beatrice don’t get that treatment. Gabourey Sidibe disappointingly only gets one scene, even if she does make the best of it, and Yaro and Bloom’s characters are left on the sidelines. But these young talents do make the film, and you feel their bond and feel empowered by their toughness and resilience.

Women who stand up for other women is always wonderful to see, but “women” doesn’t always mean “all women,” and with a cast that’s primarily women of color, the film would have benefited from a woman of color’s lens on the story to provide depth to that issue that hangs over the piece. It’s also questionable as to why the decision was made to have white cops (Luke Hemsworth among them) swoop in like knights in shining armor to try and help the group when in reality, women’s distrust in law enforcement is a big part of why victims remain silent. Another pivotal scene that would have been much more powerful if handled differently: one that reminds the audience that male sexual assault exists. Perhaps that reminder is enough for many, but with no real depth or discussion created from it, it feels like it’s just there for some shock factor.

While the end of some characters’ stories leaves much to be desired, Joey’s comes satisfyingly full circle. “Asking for It” calls for the end of the silence and for victims to be allowed to tell their own stories – and that we’re watching more than ever.