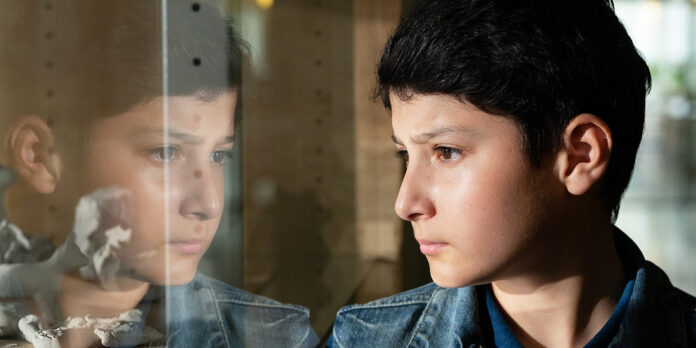 THE STORY – Rain-soaked Finnish forests bathed in a nebulous haze. Every morning, the 13-year-old Ramin is awakened tenderly by his mother. The Mehdipour family encounters everyday life in a refugee accommodation in a quiet, simple manner, full of humor and warmth. In the here and now, every moment is savored as if there were no tomorrow: time with friends, new encounters, parties and – for Ramin – falling in love for the first time. And yet, it is clear that if the family’s application for asylum is denied, which could happen any day, things will change abruptly. Moments of courage and joy, despair and worry all add to the loving portrait of a child and his family who, on the threshold of a new life, never lose their dignity.
​
THE CAST – Aran-Sina Keshvari, Shahab Hosseini, Shabnam Ghorbani, Kimiya Eskandari, Vilho Rönkkönen, Laura Birn, Eero Melasniemi & Kristiina Halkola​
​
THE TEAM – Hamy Ramezan (Director/Writer) & Antti Rautava (Writer)

​​​​​​The Iranian Mehdipour family is living in Finland and getting ready for the new school year when they get a notice that their asylum application has been rejected. Despite this, the family does their best to maintain an optimistic outlook: mother Mahtab (Shabnam Ghorbani) still gently wakes everyone up every morning, father Bahman (Shahab Hosseini) still has teeth brushing races with daughter Donya (Kimiya Eskandari), and son Ramin (Aran-Sina Keshvari) still horses around with his best friend Jigi (Vilho Rönkkönen). They file an appeal with the government but have no way of knowing when their lives will be upended and whether it will be for better or worse. “Any Day Now” is loosely based on director and co-writer Hamy Ramezan’s own experience as a refugee living in Malmi, Finland. It definitely has the feeling of something personal, drawn from memories. The deep feeling present in every frame ensures that the film is powerfully emotional. Still, Ramezan’s direction resists easy sentimentality at every turn, making this as honest a tear-jerker as possible.

The central characters are all incredibly endearing from the very first moments of the film. Ghorbani and Hosseini have wonderful chemistry with each other as a couple that gets much of their strength and joy from each other. Eskandari and Keshvari have a perfect big brother-little sister vibe – they love each other just as much as they love annoying each other. The world around them is just as lovable, from the family friends who spend summer days with them fishing and gardening, to the other residents of the refugee center, to the kind-hearted and understanding teacher of Ramin’s seventh-grade class. Rönkkönen is an ideal best friend too, going through everything with Ramin with no pretensions that they are different from each other. This is an exceedingly nice world, one in which we would all like to live, but it never feels like a fantasy world. But the unspoken uncertainty of the Medhipours’ place here is always creeping around the edges of the frame, waiting for the right moment to strike. And strike it does, as the film lulls you into a sense of complacency only to punch you in the gut with one perfectly judged shot that comes out of nowhere.

While the ending of the film is impactful, the film’s brevity feels like a missed opportunity. The film has an episodic structure centered around Ramin, so we barely know what his mother, father, and sister are doing with their lives. This lack of outside perspective doesn’t harm the film, but it does limit its scope, and the ending arrives in such an off-hand way that it’s hard not to feel that the film could have been more impactful if it had spent more time with the other family members. It also helps that the film is so gentle and good-hearted that you want to spend more time with it.

Ramezan has perfectly judged the film’s tone, not afraid of emotion but keeping it in check until key moments. The score is easily the film’s most emotionally manipulative component. Still, it is used sparingly enough that those moments feel earned instead of the cheap ploy for tears found in other films. Ramezan’s screenplay (co-written with Antti Rautava) never fully spells out the next steps in the family’s application for asylum or what they will look like. Still, it tells you just enough so that it lands perfectly without having to use any dialogue when the climactic moment comes. That the film ends on a feeling of uplift feels just right for the story the film is telling and the world it has created: The Medhipours are a family just like any other, and this is not the end of their story. If the rest of the world can treat them – and, by extension, all refugees – with the kind acceptance of the people we meet in this film, that would be a world worth sacrificing for.