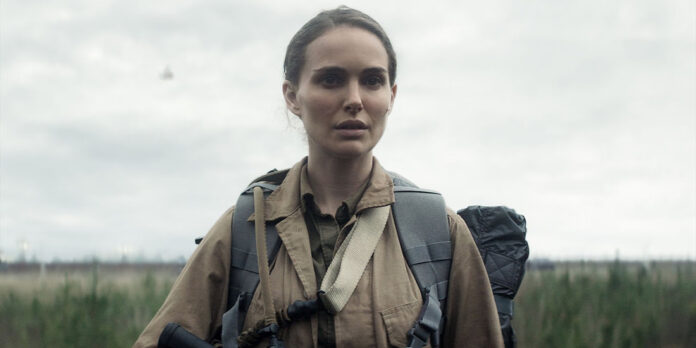 THE STORY – A biologist signs up for a dangerous, secret expedition where the laws of nature don’t apply.

​Much like how he expanded upon the concept of artificial intelligence in his directorial debut “Ex Machina,” writer/director Alex Garland tackles biology for his second directed film “Annihilation.” While the final product is not a faithful adaptation of Jeff VanderMeer’s novel of the same name, what it is instead is yet another knockout of originality from the science fiction screenwriter who has previously written films such as “Sunshine” and “Never Let Me Go.” Much like how we still praise “Alien” all of these decades later, I have this feeling in my gut (And no, it’s not my insides moving) that “Annihilation” is going to endure on as one of the greatest science fiction films of all time. With its female-led story, otherworldly images, heady ideas and terrifying action set pieces, think of it as “Predator” meets “Arrival” with “Ex Machina.” In other words, if you have the patience for it, “Annihilation” is pretty damn great.

Lena (Natalie Portman), once an army soldier, now biology professor, has been mourning the death of her husband Sgt. Kane (Oscar Isaac) for over a year after he went off on a secret mission with his unit and never returned home. One day, out of the blue, he comes back home to Lena, however, their reunion is short-lived as he falls deathly ill and both he and Lena get tracked down and taken in by the government. Being held in a facility and with her husband slowly dying, Lena is told by Dr. Ventress (Jennifer Jason Leigh) that this strange anomaly within the environment known as “The Shimmer” is slowly spreading and will eventually destroy everything it comes into contact with. Sgt. Kane and his unit were the last known group to enter the Shimmer and outside of him, everyone else had previously died. The goal is to take a group of female scientists and soldiers (Gina Rodriguez, Tessa Thompson, and Tuva Novotny) into the Shimmer and get to the heart of where the phenomenon began, a lighthouse at the center so that they can understand it and hopefully stop it. They don’t know what they’ll find once they get there and they don’t know how to explain the mutations which the Shimmer creates for all living things it comes into contact with but they know they need to keep pushing forward or otherwise face annihilation.

Alex Garland has created something truly unique with “Annihilation” both sonically and visually. I have never seen a film look quite like “Annihilation” does with its lens flares that contain all the colors of the rainbow, it’s creamy skin tones and blown out whites and its eerily haunting and mystical view of nature which has not intrigued me quite this much in a film since James Cameron created an entire jungle of his own in 2009’s “Avatar.” The Shimmer, as it is called, is a beautifully stunning yet nightmarish place where Garland is given the freedom to stretch his creative muscles to give us an imaginative look at mutated flora and fauna. There were multiple sequences within “Annihilation” which I’m sure I’ll never be able to get out of my mind both in a negative way and a positive way. Simply put, the film is truly unforgettable but what about the story?

While I do not want to get into spoilers (Half the fun of this movie is being as surprised and awestruck as the main characters are), “Annihilation” smartly takes our fundamental concepts of biology and evolution and expresses them both through dialogue and visuals. In order to create we have to destroy. Or is it that in order to destroy, we have to create? The purpose of a single cell, something so tiny that together with billions of others make up the very fabric of life itself, is at the forefront of “Annihilation’s” ideas, anchored by the very human story of a once soldier now academic scientist facing suicidal odds, all in the hope of saving her husband. The film also has a fresh spin compared to other science fiction films of today in that the main group of characters does not consist of just men. It’s not just men and women. It’s literally an entire group of strong, smart and capable women who are attempting to perform a task that none of their male colleagues could get done. Oscar Isaac (Outside of a brief role by Benedict Wong) is the only main male cast member and he’s used sparingly. This is Lena’s story, performed by Natalie Portman in one of her strongest roles to date. While the entire cast is uniformly excellent, my only big gripe with Alex Garland’s new film is that I wish the audience had a better chance to get to know the other female characters better outside of being reduced to a single conversation Lena has with Sheppard (Tuva Novotny) while rowing through the Shimmer. And from a technical standpoint, if I wanted to get extremely picky, I could tell you that I found the visual effects to be quite unremarkable at times despite the dazzling and colorful cinematography but that would be a minor criticism when the story, set design, sound (For my international viewers who will be seeing this on Netflix, turn up the volume VERY loud) and musical score are all so very strong.

Patient, brilliant, beautiful, frightening and enlightening, with “Annihilation” Alex Garland is 2 for 2 in a major way. “Annihilation” is unlike anything I’ve ever seen in terms of its visuals, its story and ultimately, how it messed with my mind. I had not felt that “high” watching a movie without any actual drugs since Stanley Kubrick’s “2001: A Space Odyssey.” “Annihilation” did something that truly horrified me while watching it, in that I could slowly feel my own sanity slipping away from me much like how the main characters could feel their own slowly disintegrating the more they were exposed to the Shimmer. I was so lost in the film that I was unable to process information the same way I normally do when I sit down to watch a movie. Filled with nightmarish yet gorgeous imagery and a truly mind-bending screenplay, watching “Annihilation” for the first time was an experience I fear I’ll never be able to have again. That’s ok though for Alex Garland has created yet another classic that blends so many different and specific elements together coupled along with its ambitious and ambiguous ending that it will always keep me coming back for more. I know that with time, the themes of this film will continue to evolve and take on new meaning for me as I near my own death and gain new profound experiences about life and our own process of annihilation.