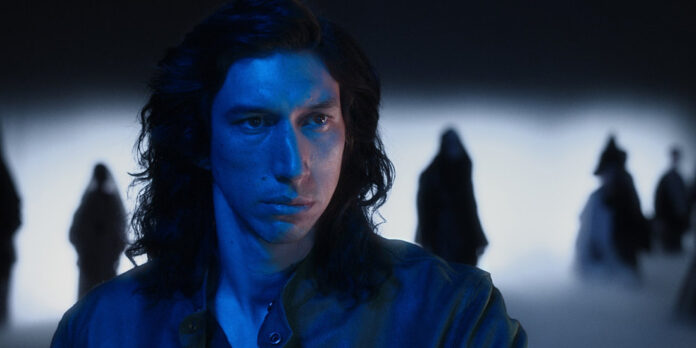 THE STORY – Henry is a stand-up comedian with a fierce sense of humor who falls in love with Ann, a world-renowned opera singer. Under the spotlight, they form a passionate and glamorous couple. With the birth of their first child — a mysterious little girl with an exceptional destiny — their lives are turned upside down.

​​​​​​​​​​For better or worse, Leos Carax’s “Annette” is precisely the kind of film that wins the Best Director prize at Cannes, and it announces itself as such from practically its first frame. The iconoclastic French auteur opens his latest feature film (only his sixth since 1984) with one hell of a gambit – a direct address to the audience admonishing them to not make any noise by turning off their devices and holding their breath, followed by a meta cinematic prologue of sorts, as Carax himself leads a recording session with the film’s composers (Sparks, of recent “The Sparks Brothers” fame) that expands into a single-take walk through the streets of LA with the trio of main players: Marion Cotillard, Adam Driver, and Simon Helberg. “So May We Start” is the unimpeachable highlight of the musical’s score and the most simply enjoyable sequence the film has on offer. It’s a warm welcome to a film that does its best throughout to push the audience away and make them stand gawking at the cinematic pyrotechnics on display.

Giving away too much of the film’s plot would ruin a good portion of its magic. Still, it goes roughly like this: Comedian Henry McHenry (Driver) is a self-loathing brute of a man who has recently fallen in love with opera star Ann Defrasnoux, leaving her accompanist (Helberg) to pine for her from the wings. Henry and Ann eventually have a child, Annette (a puppet of unholy origin), who becomes gifted with her mother’s voice at an impossibly young age. The film has a lot in its sights – toxic masculinity, fame in the modern world, the potential healing power of music, and the symbiotic, sadomasochistic relationship between audience and performer, just to name a few – and to delve into all of them, the film bloats to a length just shy of two and a half hours to tell a story with a message so simple and evident that it could easily have been shorter. But between Sparks writing songs describing childbirth and documenting a police interrogation alongside the traditional scene-setting and love songs, and Carax bringing a maximalist approach to even the most minimalistic scenes, the overlong bombast seems to be very much the point.

If this grandiosity is meant to be a critique of the musical genre, then so be it. Musicals deal in outsized emotions and gestures and have the tendency to give operatic weight to minor things – point taken. But whereas most musicals are light on their feet in the way they glide from song to song, “Annette” is a lumbering beast of a film, leadenly stomping its feet like a child playing at being Godzilla destroying a town made out of building blocks. It doesn’t help that Henry is as repellent a lead character as we’ve seen in years and that Driver is so charismatic that he can’t help but bring the film into a tighter orbit around him. It’s also frustratingly unclear whether what we see of Henry’s depressive, “provocative” “comedy” show is actually his show or some heightened version of it, be that in his mind, in the audience’s minds, or a musical number in the film “Annette” describing what his act is like as opposed to the actual act itself. Whatever it is, it is mostly unfunny; a mumbled screed purposefully meant to antagonize the audience and put Henry himself in the worst possible light. Because the film is working on so many layers of meaning and metatext, it makes the authorial intent behind Henry’s material incredibly difficult to gauge, which could be a fascinating challenge for the audience but instead comes across as annoyingly pretentious. Henry is such a hateful character that you actively don’t want to spend time with him. While Driver deserves praise for his ferociously committed performance, it’s a bad spot for a lead character to be in, especially given Driver’s subpar singing voice.

It’s easy to critique a movie musical for casting stars that can’t sing. Cotillard and Driver have proven that they can sing well enough, certainly at least as well as Catherine Deneuve and Nino Castelnuovo in “The Umbrellas of Cherbourg” (the standard to which all sung-thru movie musicals will inevitably be compared), but Cotillard is far from an opera singer. While Driver is excellent in the speak-singing bits of Henry’s comedy show, when asked to emote through his singing, he pushes too hard, either focusing so much on the singing that he doesn’t act at all or focusing so much on the acting that he goes just off-key enough to sound wrong. Sparks’s songs do not exactly require strong singers, but they still require an ability to hit specific highs. When the performers miss them, those moments fall flat. While there are moments of demented brilliance to the score (a number taking place during Ann’s pregnancy and labor makes sublime use of Lamaze breathing exercises to form a rhythmic undercurrent), there are many other moments where the penchant for repeated and overly simplistic lyrics becomes grating. As with Henry’s act, it’s hard to tell if this is meant to be taken at face value or if it represents some kind of commentary by the filmmakers, although fans of the band will assuredly get more out of it than those unfamiliar. The big songs generally land pretty well, but the scenes in between them have lyrics and melodies so under par that it makes you wish the film took a more traditional approach to dialogue scenes instead of structuring itself as a sung-thru light opera. It says a lot that by the film’s last scene, the audience feels more for a creepy-looking baby puppet with no dialogue than any of the flesh-and-blood characters who have been singing at us for over two hours.

And yet, for all that “Annette” is unsatisfying and impenetrable and abrasive, it has moments so full of cinematic brio that you can’t stop watching. Carax pulls just about everything out of his bag of tricks, and many scenes are damned thrilling to watch. A climactic yacht ride in a tsunami-like storm captures such a perfect blend of cinematic artificiality and genuine human emotion that one wonders how Carax does it and why he couldn’t keep it up throughout more of the film. He takes to the rhythm of Sparks’s music like a duck to water, matching camera movement and editing to the music perfectly. Those perfect moments take you so high that it makes the film’s lows seem even lower by comparison, which can make the film very rough going at times. “Annette” is a breathtaking cinematic experience, but in equal parts gasps of horror and sighs of admiration. It makes a strong case for filmmakers taking big swings, but not quite as strong a case for itself; this film is very easy to admire but much more difficult to love.