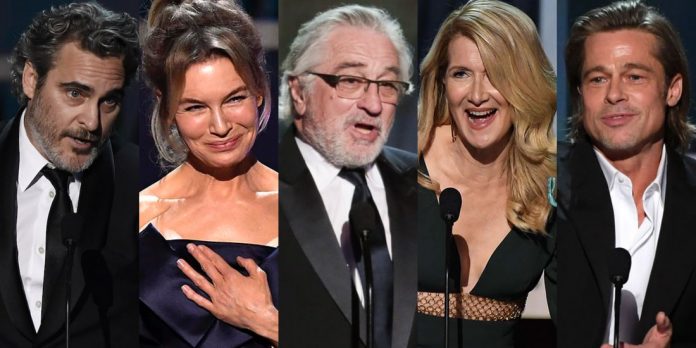 ​The SAG Awards! Actors voting for actors! A night that could change the course of the Oscar race! Just not this year!

Last night’s SAG Award winners (despite an exciting Best Ensemble winner…more on that later) should not have been surprising to anyone with a passing familiarity with this awards season. Joaquin Phoenix, Renee Zellweger, Brad Pitt, and Laura Dern continued their televised-award dominance with yet another set of wins tonight, and their path to the Oscar appears all-but-guaranteed.

​In the lead categories, Joaquin Phoenix and Renee Zellweger were once again victorious and gave charming and gracious speeches that should excite any future voters about choosing them. Phoenix, in particular, gave a surprisingly humorous and touching speech which ended with paying tribute to Heath Ledger (who won a SAG Award and an Oscar for playing the Joker character in Christopher Nolan’s “The Dark Knight”) and was a pleasant turn of events after the mixed reception his Golden Globe speech received. He should easily continue his winning streak at the upcoming BAFTAs where, like with Oscar, his film “Joker” is the nomination leader. And Zellweger continues to leap over the potential hurdles that pundits keep saying are in her way. She once again bested a double-nominated Johansson, who is perhaps her closest competitor both here and at the Oscars. The only other challenger who could potentially be victorious in this category is Saiorse Ronan, who is benefitted by her film being a Best Picture nominee and by a potential overdue narrative as this is her fourth nomination. Ronan was not nominated at SAG, but they will face off once again at BAFTA. However, I don’t expect anyone to stop Zellweger’s awards success for her portrayal of Judy Garland in “Judy” and it will be no surprise when she ascends the stairs at the Dolby Theatre.

Over in supporting, Brad Pitt and Laura Dern picked up another set of trophies to add to their impressive hauls this year for “Once Upon a Time in Hollywood” and “Marriage Story” respectively. Seemingly nothing stands in the way of these two veterans picking up a well-deserved Oscar both for their acclaimed turns in Best Picture nominees, and also seemingly as rewards for long and respected careers. There’s not much more to say about the Supporting categories; it would be unwise to not predict either of these two actors going forward. Not only do they have the precursor support needed to be the favorites of their races, but there is also not a clear narrative for any of their fellow nominees to take the Oscar. I hesitate to use the word, but they’re as close to locks as one can potentially be.

The only thing that came close to a surprise (although plenty of people were predicting it, including yours truly) was the win for “Parasite” in the final category of the evening: Outstanding Performance by a Cast in a Motion Picture. The love in the room for the film was palpable, and its victory over the favorite – “Once Upon a Time in Hollywood” – gives it a much-needed boost in its hunt for Best Picture. All the ingredients are there for “Parasite” to become the first international film to win the top prize at Oscar, it just needs a few more big precursors before most pundits would be comfortable predicting it. The most recent season I can find that supports a path to victory based on their SAG win last night is, somewhat hilariously, the year that “Crash” infamously won Best Picture. Like “Parasite”, “Crash” did not win the PGA or Critics’ Choice, but it did win the SAG and, like “Parasite” is expected to, the WGA. It also did not win the BAFTA, which “Parasite” is also expected to miss. While it may be a stretch to look to a 14-year-old race for potential precedence to support a Best Picture win for “Parasite”, it must be noted that “Parasite” is obviously much more beloved than “Crash” was, even at the height of its awards success in 2005.

So should you start predicting “Parasite” to win Best Picture after last night? It is certainly more of a front-runner with the SAG Award in hand, but there is still plenty of competition. “1917” is widely predicted to win the DGA and BAFTA which, combined with its Golden Globe and PGA victories, is a fairly unbeatable set of precursors. “Once Upon a Time in Hollywood” won Critics’ Choice and the Golden Globe, although its loss here is a pretty big blow to the film’s chances. And “Joker” is the Oscar nomination leader and is clearly beloved in the industry, so it should not be counted out yet. Overall, “Parasite” is probably not the front-runner at this point, but last night’s win was a major sign of potential continued success for the film.