“AN INCONVENIENT SEQUEL: TRUTH TO POWER” 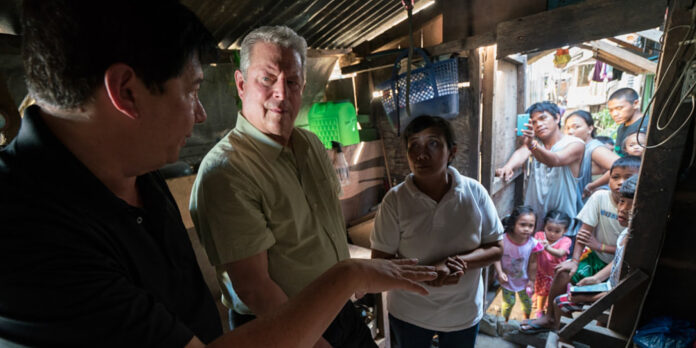 THE STORYFormer Vice President Al Gore continues his tireless fight, traveling around the world to train an army of activists and influence international climate policy. Cameras follow him behind the scenes — in moments both private and public, funny and poignant — as he pursues the inspirational idea that while the stakes have never been higher, the perils of climate change can be overcome with human ingenuity and passion.

“An Inconvenient Sequel: Truth to Power” arrives on the heels of a widely read New York magazine cover article from David Wallace-Wells, which used an alarmist approach on the issue of climate change in an effort to spur people into action. Former Vice President Al Gore strikes a far more hopeful tone in this follow-up to 2006’s Oscar-winning “An Inconvenient Truth,” though he shares Wallace-Wells’ assessment of the cataclysmic effects of climate change. Gore’s optimism stems from his interactions with an engaged citizenry at his climate leadership training sessions and from his conversations with world leaders, scientists, and entrepreneurs working on the frontlines to curtail the emission of greenhouse gases and to invest in renewable energy resources. These interactions form the core of “An Inconvenient Sequel,” and the result is a stirring documentary with the potential to inspire urgency rather than resignation.

Directors Bonnie Cohen and Jon Shenk document Gore’s experiences in a pure, no-frills fashion. Aside from a few scenes in which Gore serves as the traditional documentary interview subject, answering questions directly to the camera, “An Inconvenient Sequel” shows the former Vice President in action, speaking to municipal officials on the flooded roads of Miami, traveling to Greenland to survey the melting ice caps, and so on. The camera is a passive observer, and this works to the film’s advantage. It makes the viewer feel like a fly on the wall and, more importantly, illuminates key areas of focus for activists seeking to uphold a spirit of international cooperation when it comes to preserving the planet. For example, the movie spends a significant amount of time highlighting the negotiations at the Paris Climate Conference in 2015. Through clips of conversations with and statements from India Prime Minister Narenda Modi and his Minister of Energy, Piyush Goyal, we learn the extent to which financial concern prevented developing countries from initially embracing renewable energy initiatives. The cost of investing in the necessary technology was a daunting obstacle. Cohen and Shenk track Gore’s response to this concern, which involved persuading the company SolarCity to donate solar technology to India in exchange for India’s commitment to accede to the Paris Climate Accord. By simply following the play-by-play of the moment, from India’s reservations regarding the financial expense of renewable energy to Gore’s phone calls with representatives from SolarCity, “An Inconvenient Sequel” unearths revealing details about the multi-pronged nature of global partnership on climate change activism.

The movie’s subtitle, “Truth to Power,” addresses the giant elephant in the room, namely Trump and other denialists in positions of authority. The election of Trump casts a pall over the celebratory nature of the scenes set at the Paris Climate Conference – the viewer knows that trouble is lurking – and when Gore comments that the Trump Presidency is just another hurdle that climate activists must overcome, one suspects that he is restraining himself from voicing a blunter description of the setback that the current presidency represents. Even if Gore might be pulling some rhetorical punches, the documentary succeeds in portraying him and his allies as battle-tested advocates with the ability to make progress in the Trump era through mobilization and resistance. “An Inconvenient Sequel” is the rare movie in which a hashtag (#BeInconvenient) feels like it belongs in the closing credits.

“An Inconvenient Sequel” is unlikely to transcend political polarization. Your level of enjoyment will probably correlate with your opinion of Gore (Your humble reviewer finds him to be a thoughtful and charming humanitarian, but lord knows there are a lot of dissenting views out there). Furthermore, the fact that the movie is less wonky than its 2006 predecessor and more reliant on emotional appeals (Images of natural disasters are plentiful) may sway some skeptics to dismiss it as an “agenda” movie. But for those in tune with the dangers of climate change and for anyone interested in learning more about the groundwork that is crucial in pushing climate advocacy in a forward direction, “An Inconvenient Sequel” rises to the level of important and conscious art.

THE GOOD – Urgent, vital and filled with more optimism than its predecessor.
​
THE BAD – Your mileage may vary depending on your view of Al Gore
​
THE OSCARS – None