“ALL THE PRESIDENT’S MEN” 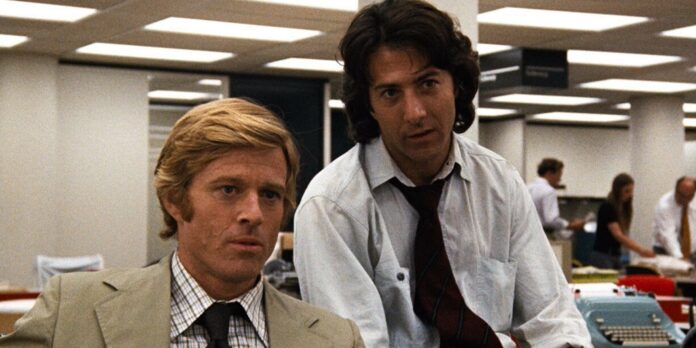 THE STORY – Two green reporters and rivals working for the Washington Post, Bob Woodward (Robert Redford) and Carl Bernstein (Dustin Hoffman), research the botched 1972 burglary of the Democratic Party Headquarters at the Watergate apartment complex. With the help of a mysterious source, code-named Deep Throat (Hal Holbrook), the two reporters make a connection between the burglars and a White House staffer. Despite dire warnings about their safety, the duo follows the money all the way to the top.

“All the President’s Men” (1976) had the unenviable task of capturing a moment in American history that was still being felt at the time of its release. The release of the eponymous book, the investigation into the Watergate scandal, and the subsequent resignation of President Richard M. Nixon had all happened two years earlier, and the nation was still processing the betrayal. There were several directions the film adaptation could have gone: incendiary, outraged, exaggerated, and each would have likely connected with a facet of the moviegoing public.

This cultural responsibility was not lost on the film’s producer and star, Robert Redford, who immediately snatched up the rights to the “President’s Men” novel upon its release. His interest in politics (and Watergate, in particular) had spiked during the making of “The Candidate” (1972), and he sought to make an adaptation that was as factual and unbiased as the journalism that inspired it. The film that resulted not only captured the moment but the timeless appeal of human beings pursuing the truth.

While that last bit about truth may seem cheesy, “All the President’s Men” is anything but. The film is so committed to authenticity, in fact, that it often feels as though we’ve been dropped into the machinations of a real newsroom. The jargon and the shuffling of notes, or the split-second decisions as to which story makes what page, all contribute to the matter-of-fact setting in which Watergate first surfaced. We aren’t dealing with men who fancy themselves crusaders– Bob Woodward (Redford) and Carl Bernstein (Dustin Hoffman) follow leads because they get paid to and because they’re good at it.

There was some initial skepticism over the casting of movie stars Redford and Hoffman as the duo who broke the story. Still, both men set them aside and delivered some of the most subdued and masterful work of their respective careers. Redford is mesmerizing as Woodward, the inexperienced boy scout who still needs to sharpen his copy. There’s a naivete that registers early on, but the further the character wades into the murky Watergate details or the underground parking garages where he meets Deep Throat (Hal Holbrook), the more he comes to realize how rotted the institution of government has really become. There’s never a breakdown scene or a big monologue highlighting said change, which only makes Redford’s ability to communicate it all the more impressive.

With his chain-smoking and smaller stature, Hoffman makes for a compelling visual contrast to the strapping Redford. He plays Bernstein as a cynic who isn’t afraid of showing his emotions (primarily frustration) on his sleeve. We learn little to nothing about his personal life because everything we need to know about him is shown through his investigatory tactics: doggedness, misdirection, and sweet talk. He’s the sort that bleeds ink; anything more would be irrelevant. A lesser film would have saddled Bernstein (or Woodward, for that matter) with a love interest who bemoans his being a workaholic, but “All The President’s Men” has the good sense to focus on the case and only the case.

Whatever myopic risks the script takes by focusing exclusively on Watergate is quelled by the wizardry of William Goldman. He turns minutiae into mass entertainment through an assortment of cleverly constructed scenes, fast-paced exchanges, and turns-of-phrase that only reveal themselves to be quotable or comedic on the fourth or fifth viewing. “All the President’s Men” is basically a series of interviews and editorial meetings strung together, and yet, Goldman twists the repetition to stir up momentum that supersedes even his most action-packed stories (“Butch Cassidy and the Sundance Kid,” “Marathon Man,” etc.). This restraint and unwillingness to bend to more conventional means of storytelling makes “All The President’s Men” the screenwriter’s finest outing.

Matching Goldman on the visual front are director Alan J. Pakula and cinematographer Gordon Willis. These men had already crafted two of the best political thrillers of the decade, “Klute” (1971) and “The Parallax View” (1974), and they tailored their slick aesthetic to match the groundedness of the material. The Washington Post is blown out with fluorescent lighting, which gives its scenes the feel of a documentary, while ventures outside the office are given the full treatment, with Pakula’s staging and Willis’s manipulation of light and shadow. The aforementioned Deep Throat scenes best exemplify this approach, with the character’s face always hidden behind a haze of neon green.

It’s unsurprisingly easy to sing the praises of “All the President’s Men.” It’s less easy to pinpoint the film’s flaws, of which there are very few. The performances, direction, and writing are all superb, but it does lack somewhat when it comes to an emotional core. Woodward and Bernstein are never given motivation that goes beyond their job description, and as such, there’s a sterility to the film that its successors, namely “Zodiac” (2007) and “Spotlight” (2015), tried to rectify. You could argue that adding an emotional angle would take away from the film’s fact-based approach, and you’d probably be correct, but that doesn’t squash the issue outright.

It’s rare that a film sets out to capture the zeitgeist and actually pulls it off. It takes a remarkable assortment of talent and good timing to do so, and that’s what Redford, Hoffman, Jason Robards (in an Oscar-winning turn!), and the rest of the people behind the camera represent here. It’s a classic for both New Hollywood and the journalism genre and a timeless story that manages to be right on the money while reminding us to always “follow the money.”