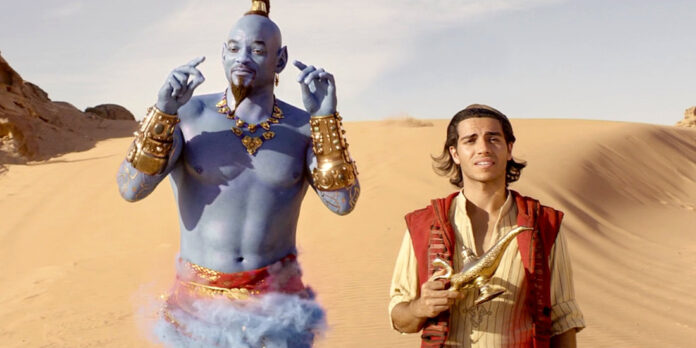 THE STORY – Young Aladdin embarks on a magical adventure after finding a lamp that releases a wisecracking genie.

​​​​​​​We all laughed. We all scoffed. We all begged for it not to happen. But now, Guy Ritchie’s 2019 live-action remake of the Walt Disney animated classic “Aladdin” is now in theaters. And whether you wished for it or not, surprisingly…it’s not a total disaster as the internet would’ve had you believe. There are still plenty of issues to go through but Ritchie’s tone, respect for the original and of course, the wonderful story and songs go a long way towards turning this into a diamond instead of it being all that rough.

Based on the 1992 Disney animated film, “Aladdin” follows the titular character (Mena Massoud) as he goes from being a “street rat” in the city of Agrabah to coming into possession of a magic lamp which grants him three wishes through an all-powerful Genie (Will Smith). Wanting to impress the Sultan’s daughter, Princess Jasmine (Naomi Scott), Aladdin has the Genie transform him into a prince in an effort to impress her. However, the evil Jafar (Marwan Kenzari) has plans to overthrow the Sultan, seize the lamp, the princess and Agrabah itself.

When the initial trailer for “Aladdin” dropped, people were quick to take note of Will Smith’s look as the Genie. We all cringed and feared the worst. However, it pleases me to say that this is one of Will Smith’s better roles as he sings quite well, dances, charms and brings his usual charisma to the role to make it all his own. Copying what the late great Robin Williams did all those years ago was an impossible task so Smith does not even try. The manic energy of the Genie is still present but Will Smith finds the slower, emotional and yes, more relaxed moments to humanize the powerful being. He also sings his signature songs quite well too!

Mena Massoud and Naomi Scott have wonderful chemistry as Aladdin and Jasmine, fully embodying the original animated characters and making us fall in love with them all over again. Scott, in particular, has a show-stopping musical number created specifically for the new film that should announce to the world what a wonderful talent she truly is. Her role is also expanded from the original in a way that is thoughtful and never feels forced. Unfortunately, Marwan Kenzari is woefully miscast as Jafar. I’m not entirely sure what Ritchie was going for with this new version of the character. Here, he is younger and not quite as menacing as the animated original. It never really works when the original is so prevalent in our minds and it makes almost every scene he is involved in almost unbearable.

Ritchie brings his usual flair to “Aladdin” and it’s easy to see why Disney thought he was the man for the job. His staging of the musical numbers, shot selection, creativity involving the Genie’s powers and relentless energy is felt throughout every frame of “Aladdin.” Sometimes it threatens to overtake the film as the pace doesn’t know how to let certain slower moments breathe a little. The colorful costume design and production design are all top-notch, even though I expected Agrabah to be a bit bigger but that’s a minor complaint compared to the cinematography which is some of the worst I’ve seen in a film this year. It’s though as if someone forgot to dial up the contrast and give the film some shadows. This production could’ve looked wonderfully cinematic but instead looks very cheap and almost dare I say, B-movie level at times. The visual effects are also very hit or miss with certain CGI creations and set pieces looking believable and others pulling you right out of the film.

Thankfully, the film’s iconic songs are intact and find their way into the 2019 version in order to transport us back to that nostalgic place from our childhoods and make us feel for the characters and the film’s themes of feeling trapped, identity and seeking power. Guy Ritchie didn’t bring us a street rat nor did he give us a Sultan. It’s almost a miracle that “Aladdin” isn’t a complete failure from start to finish. Considering the expectations heading in, a mixed bag is not quite a terrible thing in this case and I suspect those less critical will be more forgiving and let the filmmakers sweep them off their feet on this brand new magic carpet ride.