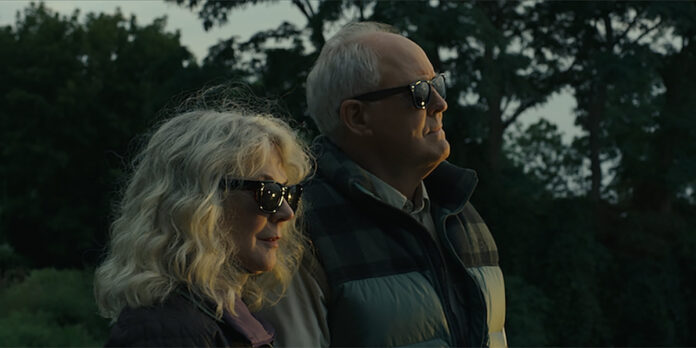 THE STORY – Ed Hemsler spends his life preparing for a disaster that may never come, and Ronnie Meisner spends her life shopping for things she may never use. These two people will try to find love while trying not to get lost in each other’s stuff.
​
THE CAST – John Lithgow, Blythe Danner, Derek Cecil, Katie Aselton, Sophie Thatcher & Eve Harlow

​​​We’ve seen teen and adult hipster romances before. You know what I’m talking about. Those off-kilter but cute romances that you can’t help but just fall over for despite how cringe-worthy they can be at times. “The Tomorrow Man” is exactly that but for an older generation, which helps it to stand out amongst the crowd thanks to two likable performances from John Lithgow and Blythe Danner.

Ed (John Lithgow) is an elderly man who lives on a farm in a life of solitude. He knows a lot thanks to his obsessive and highly regimented daily routine of conducting chores, reading information on the internet and watching the news in the evening. Life may be passing him by but Ed is preparing for something: the end of the world. The man who knows a lot meets a woman named Ronnie (Blythe Danner) who buys a lot (she is a shopaholic) in a supermarket. Ed pursues her as he finds himself drawn to her thinking that she may be on his same wavelength of idiosyncrasies. The two formulate a touching romance built on trust and acceptance of each other’s quirks.

“The Tomorrow Man” may not be trying to re-invent the genre or give us a story we haven’t seen before but it does put a fun twist on things thanks to the talent of Lithgow and Danner. The two have a sweet and tender chemistry that does come off painfully awkward at first due to how much Ed persues Ronnie (One could say he practically stalks her at first). However, the film starts to settle into a nice and comfortable groove examining these two people’s lives and how, even at the end of either their own lives or all life itself, it is possible to find love and acceptance.

Noble Jones impressively lenses the film with some crisp cinematography making for an aesthetically pleasing and unobtrusive motion picture experience. I do wish there was more time to explore deeper into the effects that each of the two main character’s paranoia and fear had on one another and the people in their lives. This is briefly touched upon through Ed’s son Brian (Derek Cecil) and his own family but it feels too fleeting when there was clearly more material to provide a more meaningful film. “The Tomorow Man” could’ve made its point with a lot more impact but instead it back peddles and settles for being a middle of the road film with a simplistic message of living your life by your own rules as long as no one is getting hurt. It’s a perfectly adequate film in that regard, backed by two humanistic performances from excellent actors, but it never achieves its full potential.