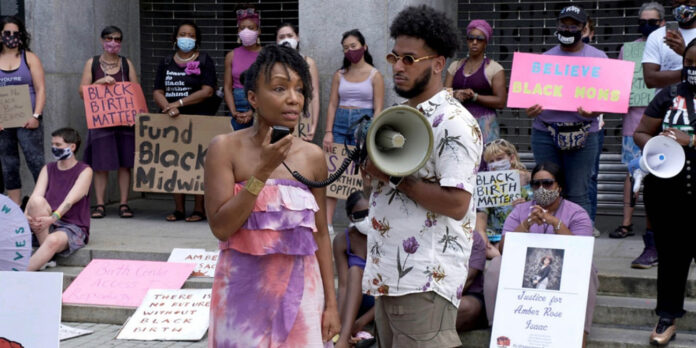 THE STORY – A disproportionate number of Black women are failed every year by the U.S. maternal health system. Shamony Gibson and Amber Rose Isaac die due to childbirth complications. Now, their partners and families sound a rallying cry around this crisis.

​​​​When “Aftershock” first premiered at the 2022 Sundance Film Festival, Roe v. Wade was still in place. With the shocking news coming from the United States over the past few months with the Supreme Court reversing Roe v. Wade nearly 50 years after it was first voted on, it is easy to see why many people are worried about anti-abortion laws in their states and hometowns. Anti-abortion laws don’t just stop people from deciding the right to choose if they want a child or not in the case of an unwanted pregnancy, but it also targets the health and wellbeing of the mother-to-be. Statistics have shown that Black women and the disabled are more likely to experience complications due to pregnancy. Therefore they are most at risk of carrying a pregnancy to term. “Aftershock” takes that statistic and places it at the forefront in such a way that it is hard to ignore.

The opening sequence, consisting of a montage, gives the viewer a chance to see the life of mother-to-be Shamony Gibson. They are full of joy and pride, have completed their education, and are surrounded by loved ones as they share a small glimpse into being pregnant. However, the film transitions smoothly from the montage to a clip of Shamony sharing her excitement about becoming a mother once again before panning to a room filled with friends and family as Shamony’s partner, Omari Maynard, announces that it has been several months since she has passed away. A mix of real-life footage and voice-over from Shamony’s family confirms that her death was due to childbirth complications. Shortly afterward, we are introduced to Bruce McIntyre, a man who has also lost his partner due to childbirth complications. Amber Rose Isaac started to show symptoms such as loss of breath and dizziness during the second and third trimesters of the pregnancy. Yet, medical professionals took her concerns lightly, and she was ignored until it was too late.

“Aftershock” interweaves the lives of the two women by having their partners, Omari and Bruce, meet up to talk about their frustrations and work together to push for Black women to get proper medical support during their pregnancies. The structure of the film, having the viewer see their tragic stories and then seeing the change they want to make within the maternal system in the United States, makes it easy for us to support these two men and get behind their cause. Whether it is protests, live news segments, or group meetings and discussion sessions, the Black community wants to get their voice heard, and once can only hope this documentary can help push this narrative further. The message of the documentary is also supported by medical professionals such as Neel Shah, MD., providing evidence to back the claim that Black women are more at risk during pregnancy, with a bar graph highlighting the mortality rate for African Americans is 44 per 100,000 births, in comparison to the overall mortality rate of 20.1 per 100,000 births. This statistic is not due to Black women being built differently, but instead the systemic racism within the United States and how they are not taken seriously enough when something does go wrong during a pregnancy.

For only 86 minutes, “Aftershock” is a comprehensive documentary that covers numerous aspects of the subject matter. Not only does this film follow Omari and Bruce as they try to get justice for the loss of their partners, but it also follows other mothers-to-be who are worried about their pregnancy and the statistics. The documentary delves deep into the root of the problem with the epidemic in the United States, linking it to the growing rate of C-Sections and the growing numbers of trainees practicing on the Black community. The film also presents an option for Black women, birth center care, which is expensive but prioritizes natural birth and a safe and comfortable environment. While it is something that is far from possible for many Black families, it is meaningful to showcase options that present the potential of childbirth care and how the system should be operating, offering a glimpse of hope for the future. All the different sections of this subject matter can be a lot to take in at once, and perhaps this film would have benefitted from having an extra 10 or 15 minutes to slow down and allow the viewer to absorb everything going on. However, the documentary does go into detail on the epidemic and presents the subject matter both from mothers-to-be and those who have suffered loss due to childbirth complications, which is most critical to illustrate its main point.

It is hard to be optimistic about this epidemic improving when the United States is going backward on abortion laws and women’s rights regarding pregnancy. However, “Aftershock” proves that change must happen to protect Black mothers from the tragedy that is going on right now. This documentary does not sugar-coat the situation but instead places it in the forefront, using two particular cases – Shamony Gibson and Amber Rose Isaac – to hammer the message into our heads and inspire change. “Aftershock” was already one of the best films to come out of Sundance this year, but now it has also become one of the year’s most essential films.