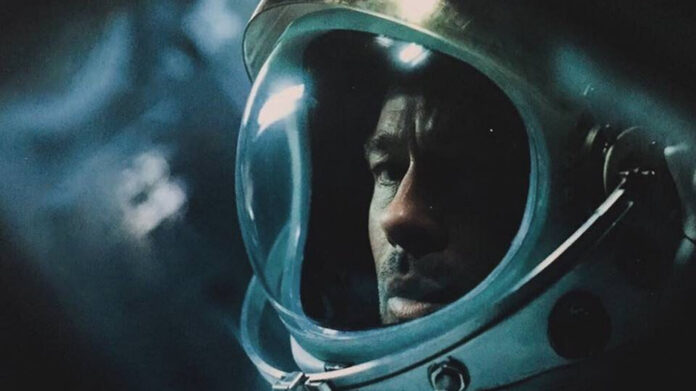 ​Handing director James Gray nearly $100 million dollars to make an impassionately moving space epic starring Brad Pitt might make for one of the most daring and inspiring sci-fi films of the decade. “Ad Astra” is not a flawless movie but its ambition rivals that of “Interstellar,” making for one captivating engaging experience that is pleasing to the ears, eyes, and soul. It’s easily James Gray’s biggest film yet after his previous foray into large scale epic filmmaking with “The Lost City Of Z.” Continuing to explore themes of purpose, family, legacy, and crafting a cinematic experience that rivals the works of Terrence Malick, James Gray, his team and a never been better Brad Pitt reach beyond the stars for something existential and ethereal. And they mostly get there.

Brad Pitt is Major Roy McBride, an astronaut who has been tasked to travel to Mars to make communication with his long thought to be believed dead father and fellow astronaut Clifford McBride (Tommy Lee Jones). Various power surges have been occurring throughout the solar system, causing damage and destruction. The source of these surges, traces back to a failed mission Clifford led decades ago where the entire crew went missing. Hoping to send a laser audio transmission from Mars to Neptune, it is believed that Roy is the only one who can appeal to his father and find out what exactly is going on and save the galaxy.

Establishing an atmospheric and solemn mood (mostly due to Max Richter’s gorgeous and understated score), James Gray’s contemplative and deliberately paced sci-fi narrative deals greatly in the existential. Roy’s mission is inherently a personal one that he cannot allow to mentally affect him (as he routinely checks in for numerous psychological evaluations), otherwise, he will be prevented from carrying on. A man who’s heart rate never reaches above 80bpm, even in the face of imminent death (an early opening fall from space all the way back down to Earth is thrilling and demands to be seen on the largest screen you can find), Roy McBride is one of the best characters that’s ever been given to Brad Pitt to play and he delivers with one of his absolute best performances. Struggling with his personal life (including a failed marriage to his wife, played briefly by Liv Tyler) and having difficulty separating his persistence for the unknown with his connection to the known, Brad Pitt’s performance is strong but sensitively vulnerable in a way that is subtle but tremendously affecting. So too is the movie itself as it balances ideas and set-pieces both big and small, creating a film which might feel uneven at times but is nonetheless unforgettable.e

Hoyte van Hoytema’s cinematography is different enough from his previous space work on “Interstellar” that it instantly jumped out at me as praiseworthy for crafting a different look and feel. Although this is James Gray’s biggest budgeted film to date, it still retains an indie, grainy identity which once again, helps the film to feel both epic and small at the same time. The visual effects and sound work are all top-notch as well. Even though the moon rover sequence shown in the trailer feels forced into the narrative to jolt the audience’s level of excitement (You can practically hear a studio executive screaming…”Look people! It’s “Mad Max: Fury Road” but on the moon!”), it’s still an excellent showcase of the film’s technical work with its unique sound design and visuals.

“Ad Astra” is so close to being a great movie that I have to settle for it being merely good in this case due to two reasons. One of them is the above-mentioned action setpieces which feel shoved into the movie (and have been highlighted to death in the trailers) and completely dislodged from the more thoughtful and heartfelt story that James Gray so clearly wants to tell. The other is the utterly wasted talents of Donald Sutherland, Ruth Negga and Liv Tyler. Each major star is only in the film for a few moments with little to zero character development. With minimal screentime, no one can make an impression and instead, their worthless presence serves as a distraction to an audience who wishes that their characters could’ve been written with the same level of depth and care as Roy McBride. The closest is Tommy Lee Jones, who’s Clifford McBride comes into the third act and creates some stirring moments with Brad Pitt on the nature of the bond between fathers and sons.

As Roy McBride travels deeper into space, he loses pieces of himself the further he goes. Always in search of answers. Thirsting for knowledge and driven to complete his mission. However, as much as “Ad Astra” is about the pursuit and discovery of something greater than ourselves, it is also about learning to let go. The answers we sometimes seek are right in front of us and it’s not worth the emotional and physical sacrifice we are willing to make. James Gray’s ability to equate the exploration of space with the exploration of these thought-provoking ideas is what makes “Ad Astra” a deeply felt movie with a (possibly) career-best performance from Brad Pitt. Unfortunately, its two main issues prevented it from being an all-timer for me but if you can set aside those issues, the universal impact of James Gray’s latest can be incredibly satisfying and emotionally rewarding.