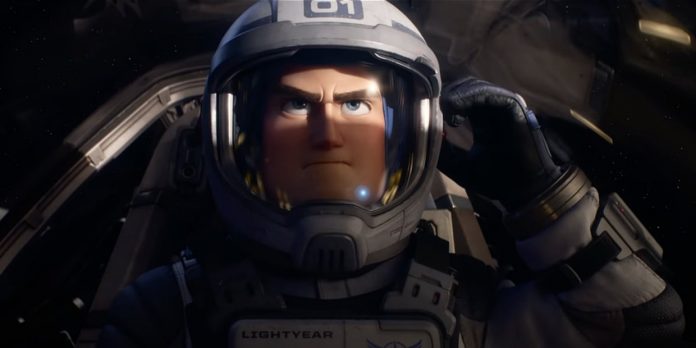 We’ve always known that the creative artists and storytellers at Pixar are fans of “Star Wars,” with countless references to the franchise found in their works over the years. Now, director Andrew McLane, a self-described massive “Star Wars” fan, is bringing that love and inspiration to Pixar’s latest feature film, “Lightyear,” which marks the first time the animation studio will deliver a science fiction action-adventure film for audiences worldwide. McLane has been working at Pixar for twenty five years, first as an animator and then as a co-director on “Finding Dory.” “Lightyear” marks his solo directorial debut. I was fortunate enough to see thirty minutes’ worth of footage a few weeks ago ahead of the film’s theatrical premiere on June 17th. Here are some of my takeaways from what I was shown.

​”Lightyear” is based within the world of “Toy Story,” but it is not the same Buzz Lightyear character (voiced by Tim Allen) that we’ve grown to know and love over the years. In actuality, McLane’s film is the movie the character Andy saw, which changed his life and made him request a Buzz Lightyear action figure from his mom for his birthday. What we will see on June 17th is that movie, but it is also the sci-fi movie McLane himself always wanted to see as a kid, and now he’s been given the opportunity to make that film for a whole new generation of Andys.

Taking over five and a half years to produce, “Lightyear” will be highly cinematic with a visual style I can only describe as stunning (see the various screenshots below, which illustrate the level of detail in the animation). The animators opted for a realistic look in the film’s aesthetic that would harken back to classic Sci-Fi films from their own childhoods. Combine that with the most advanced computer imagery animators have at their disposal today and what you get is a film that has been highly thought out from the ground up in terms of its worldbuilding, technology, and character design. The mantra McLane and his team had while putting all of this together were three C words: “Cohesive, Clear & Cinematic.”

To bring the world of “Lightyear” to life in a way that would not only pay homage to the great sci-fi films of the past but also our nostalgia for the “Toy Story” franchise, a whole new story was needed for audiences to feel the journey was worth taking with a character we already know so much about it. It’s important to establish that while the Buzz Lightyear in this movie retains a lot of the characteristics and hallmarks of the Buzz Lightyear from the “Toy Story” movies, such as his constant disagreement over the nature of reality, his suit, laser, communications with star command and even his feud with the evil Emperor Zurg (voiced by James Brolin), we’ve been told that there will still be plenty of surprises in store for audiences with this version of Buzz Lightyear.

Actor Chris Evans, who has become a global blockbuster megastar for his iconic performance as Captain America in the Marvel Cinematic Universe, is breathing new life into the character of Buzz Lightyear through his vocal performance, which still feels like the self-serious but goofy Buzz Lightyear we’re all familiar with but more grounded, humane and layered. He’s joined by his good friend and trusted ally Alisha Hawthorne (played by Uzo Aduba) and his commanding officer Commander Burnside (played by Isiah Whitlock Jr.), who each bring a wonderful sense of energy and personality to their characters. Without revealing too much about the film’s plot, the story of “Lightyear” will center around the universal truth of time, the dark side of nostalgia, and living in the past. When Buzz and his crew find themselves stranded on a mysterious planet, a many years-long mission is attempted to find a way to bring everyone home, which results in Buzz pushing through the cosmos, but in doing so, he ages slowly while everyone else left behind gets older. It gets to the point where even his good friend Alisha now has a granddaughter named Izzy (voiced by Keke Palmer). Each time he returns after an unsuccessful mission, he must reconcile with his shortcomings and face the reality of his friends aging right before his very eyes. To cope with the distress, he’s given a cute sidekick character, a robotic cat named Sox (hilariously voiced by Pixar’s “The Good Dinosaur” director Peter Sohn), who he bonds with as he tirelessly tries to find a solution.

​Each time I think the team at Pixar can’t possibly push the bar any higher in terms of their animation, they continue to outdo themselves with higher degrees of difficulty, bringing a sense of realism to the wonderous images we see on screen. There are many references to be found throughout, from the beforementioned “Star Wars” to “2001: A Space Odyssey,” “Planet Of The Apes,” and even modern-day films such as “Interstellar” and “First Man.” Although we’ve only been given brief glimpses of what is to come, the story of a man stuck in time and space is one that has far higher ambitions than what I initially expected when this standalone feature was first announced, and it will be both exciting and intriguing to see how McLane balances such lofty adult themes with the studio’s penchant for entertainment and humor for kids while maintaining the spirit of a beloved character. Outside of the story, from what I’ve visually seen so far, “Lightyear” is both vibrant and highly realistic in its use of lighting, depth of field, and camera placement, all in service of creating something which will unlock our sense of childhood wonder to reach for the stars to infinity and beyond.
​

Are you excited to see “Lightyear?” What are your thoughts on what you’ve seen and heard about the film so far? Please let us know in the comments section below or on our Twitter account.

Share
Facebook
Twitter
Copy URL
Previous article
Adapting The Unadaptable: Why Some Broadway Shows Should Not Be Made Into Movies
Next article
A Special Look At Pixar’s Upcoming “Lightyear”