A Recap Of The 2022 BAFTA Nominations 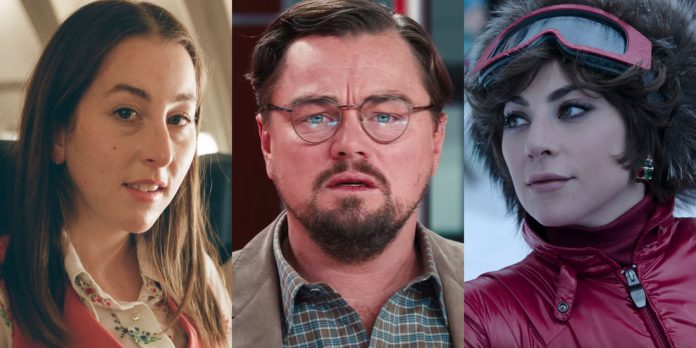 By Amy Smith
​
The 2022 EE British Academy Film Award nominations were announced yesterday, and even with the jury system in place and change of rules to prevent the major snubs, there was still plenty of surprises with who missed out and who made it in. So, what do these nominations mean, and who is in a strong position to score a nomination at the Oscars this upcoming Tuesday? I delve into the above-the-line categories below, but if you have not already seen members of the NBP team reacting live to the BAFTA nominations yesterday, you can do so on our Patreon here.

Who Were The Top Two?
Last year, there were no first-round saves in the acting categories as the jury got to select every nominee. This led to Oscar-contending performances such as Carey Mulligan for “Promising Young Woman” and Viola Davis for “Ma Rainey’s Black Bottom” missing out. To avoid this happening again, BAFTA changed the rules for this year so that the top two voted performances in round one would automatically be nominated, with the jury selecting the other four nominees. While it is nice to see nominations such as Ann Dowd for “Mass” and Woody Norman for “C’mon C’mon” recognized, what is important to try and acknowledge is who the top two saves are and who is popular enough to secure themselves an Oscar nomination. Let’s break this down into the four categories:

Best Actor: The top two saves seem to be obvious here, with Benedict Cumberbatch for “The Power of the Dog” and Will Smith for “King Richard” making it in every single precursor this year. With several pundits, including myself and Matt, predicting Smith to not even score a nomination at BAFTA, this solidifies his place as the frontrunner this season. What comes as a surprise is that Andrew Garfield missed here for “Tick, Tick… BOOM!” and with that film bubbling on the edge of numerous categories, including Best Picture, this omission makes it tough to see a win for him this year over Smith or Cumberbatch.

Best Actress: The only performance here that I can feel safe is a top-two is Lady Gaga for “House of Gucci.” She is now the only actress in this category to make it into every precursor, and with the film contending for a Best Picture spot, she may just have taken the frontrunner spot at this moment. With Olivia Colman, Nicole Kidman, Kristen Stewart, and Jessica Chastain all missing here, the following most logical selection for the top two saves might be Alana Haim in “Licorice Pizza.” With a nomination at the Critic’s Choice, Golden Globes, and now BAFTA, she may just be a fresh new face to break into this list.

Best Supporting Actor: In this list, there are three potential nominations who could have been saved by the top two selections. The most confident one is Kodi Smit-McPhee in “The Power of the Dog,” who has not missed anywhere and is the frontrunner at this point to win. Here, the toss-up is between Ciarán Hinds for “Belfast” and Troy Kotsur for “CODA.” Kotsur has not missed a nomination anywhere yet, while Hinds did miss a nomination at the SAG Awards. However, it is clear from the nominations that BAFTA loved “Belfast,” and it could be said that Hinds would have gotten more support from the British voting body. Regardless, this makes all three of these performances safe choices to predict at the Oscars.

Best Supporting Actress: Once again, there are several performances in the Supporting Actress race that could have been a top-two save. Aunjanue Ellis, Ariana DeBose, and Caitríona Balfe all make sense to have been saved here, given the love for both “King Richard” and “Belfast” and with DeBose taking the lead in the race this year with a Golden Globe win and not missing a single precursor. Just like with the Supporting Actor race, it seems safe to predict all three here getting in at the Oscars.

Who Got What They Needed?
There were several nominations that I was keeping an eye on to see if they were going to appear and make their case for Oscar nominations, and quite a few of them came through. First, let’s start with the success of “Drive My Car,” grabbing three nominations for Director, Adapted Screenplay, and Film Not in the English Language. The BAFTAs was the only place that Thomas Vinterberg showed up last year for “Another Round,” and he managed to score a Director nomination at the Oscars after that, so I feel good sliding Hamaguchi into my fifth slot for Director this year and to crack the Adapted Screenplay category alongside that.

If you were hesitant about Adam McKay’s “Don’t Look Up” making it into the Best Picture line-up, it has solidified itself as one of the safe contenders. Not only has the film made it in the top category at the Golden Globes, Critics Choice, SAG, and PGA, but it has now scored a Best Picture nomination at the BAFTAs. With a supporting nomination in Original Screenplay and a few other places to see surprise nominations come through, this is a film that must be in your Best Picture predictions.

There was discussion of “King Richard” losing momentum for a while, but the film managed to surprise at BAFTA and score in everything it needed to. Not only did Will Smith and Aunjanue Ellis score nominations, but the film also appeared in Original Screenplay and Casting, highlighting the strengths of that movie and how far out Smith is in the Best Actor race. While it may still surprise with an additional nomination in Editing, its place in the Best Picture race is once again secure.

In a Best Actor race that feels like it has four safe predictions and one slot that could go to numerous performances, Leonardo DiCaprio may have just put himself forward to take that space for “Don’t Look Up.” Peter Dinklage, unfortunately, missed across the board for “Cyrano” and Javier Bardem’s nomination in SAG may have been a tag-along choice for the love of Kidman’s performance in “Being The Ricardos,” but DiCaprio scoring in BAFTA may help push the nomination tally for “Don’t Look Up” by one on Oscar nomination morning. Not only is he a recognizable name that is beloved by the Academy, but he has a big performance in a film that will get some sort of major recognition. If it is not in Director, Actor makes a lot of sense for an Adam McKay movie.

The Supporting Actor race has been a mess the entire year, and with potential consensus for Hinds, Kotsur, Smit-McPhee, and Jared Leto for “House of Gucci,” that also leaves one spot for the Oscars. While the film has not performed as well as it should have this year due to screener issues and perception of awarding the same story twice, Mike Faist scoring a nomination here may see him get the fifth position for “West Side Story” over Bradley Cooper’s “Licorice Pizza” and Jamie Dornan’s “Belfast” performances. It is a performance with a much longer runtime than Cooper has and with more to do than Dornan does, and he has slowly been receiving critical praise for it. The BAFTA nomination shows passion for his role, and it will be interesting to see if it continues over at the Oscars.

There is an unwritten rule in the Best Documentary category to never predict the frontrunner, and this year that honor goes to “Summer of Soul.” It has gotten in every line-up and has scored some significant wins at this point, and the fact that it is talking heads and archival footage does not help the perception it might get from the branch at the Oscars. However, the film exceeded expectations at the BAFTA when it scored a Best Editing nomination over films such as “The Power of the Dog,” “Don’t Look Up,” and “West Side Story.” This suggests that there are people in the industry that admire the film’s crafts and not just the subject matter, and that may help break the chain of the frontrunner missing out at the Oscars this year.