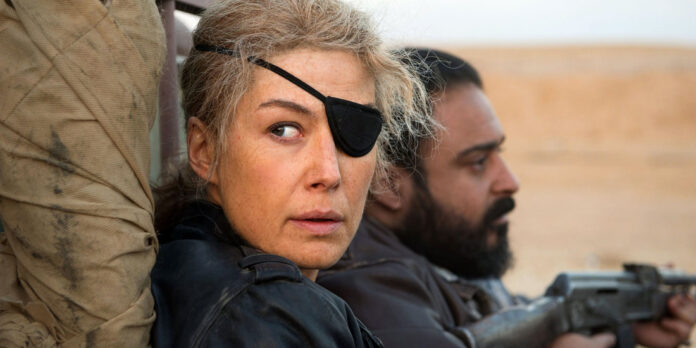 THE STORY – Celebrated war correspondent Marie Colvin is a woman who is as comfortable downing martinis with high society’s elite as she is brazenly staring down warlords and fleeing from gunfire. Driven by an enduring desire to bear witness and give voice to the voiceless, Colvin charges into danger, constantly testing the limits between bravery and bravado.

​​​​Marie Colvin was one of the world’s leading war correspondents, known for throwing herself into the eye of the storm and chasing stories others shied away from. In 2001 she lost the use of an eye from a bomb blast in Sri Lanka, and for it she was awarded the journalist of the year, earning acclaim from her peers and notoriety from her readers. “A Private War,” tells Colvin’s story a decade following Sri Lanka, culminating in her fateful visit to Homs during the Syrian war in 2012.

The opening sequence sees Rosamund Pike in the lead role, gallantly following her guides through a battle zone. It was the perfect place to begin her story, providing all the exposition required in just a few short minutes, with an explosive climax as she becomes the Marie Colvin we recognize – bruised, beaten, battle worn, with a trophy on her left eye to prove it. The rest of the first act, as she removes the dead weight in her life of a failed marriage, the seeds are sown for the personal struggle to come and ends with a chance encounter that shapes the rest of her story.

Enter Jamie Dornan as photographer Paul Conroy. Though his relationship with Colvin is strictly professional, “A Private War” conveys empathy, respect and a genuine platonic affection between the two. Dornan and Pike clearly have confidence in one another to bring out the best in their characters, and this shows in their performances here. Some of the most poignant moments in the movie are when we hone in on just them and remove ourselves temporarily from the war-torn backdrop. As Marie’s struggles with post-traumatic stress disorder continue to worsen, fuelled by her own refusal to admit it, the story moves in tandem; the conflict posing an apt background to her own inner turmoil as she enters the field. This is not a woman who enjoys going to war but, as she eloquently puts in one showdown with her editor, she “sees it so you don’t have to”. This is not a pleasure to her, but an obligation, at the cost of her own peace and safety.

However, Rosamund Pike brings more than just a two-dimensional heroine to this adaptation. She delivers a nuanced, troubled performance which is not just compelling but believable – and just in case you’re not familiar with the real Marie Colvin, a real-life interview plays over the end credits. Say what you want about any creative license which would have been used to make Colvin and her life more cinematic, the accent and rawness of Pike’s performance was spot on.

Though this does wonders for her cause when it comes to mounting an Oscar charge, it also cemented the suspicion held throughout the film, that “A Private War” would have been even more powerful told as a documentary. Alas, had this been the case, it would have lost the audience it deserved, so kudos to Oscar-nominated documentarian Matthew Heineman (“Cartel Land” & “City Of Ghosts“) for bringing the story to screen in this way. He tows the line between war drama with character dissection, using the landscape as effective exposition and balancing moments of action with dialogue well.

The million dollar question with any biopic is how to end a story that everyone knows the ending to. In this case, the answer is being ruthlessly honest and having the confidence to tell it in a way which keeps you on the edge of your seat. In the final scenes, as Colvin and Conway navigate through the devastated city of Homs. The climax is not so much about how the film ends but on whether or not Colvin gets the closure she needs and brings her character arc to a worthy conclusion. The tragedy is an inevitably, and Heineman plays on this, with ever nearing bombs a stark reminder that Colvin’s time is almost up. The use of sound is far from discreet but highly effective in contextualizing her intimate final moments on screen.

“A Private War” succeeds in preserving the memory of an important figure in modern journalism, and in paying tribute to someone who put her own interests aside on her crusade to broadcast the truth, no matter the cost. That said, Heineman should have stuck to his comfort zone and, had he done so, he may have easily secured his second Oscar nomination. Otherwise, I fear “A Private War” may slide under the radar, even though it shouldn’t.