“A CURE FOR WELLNESS” 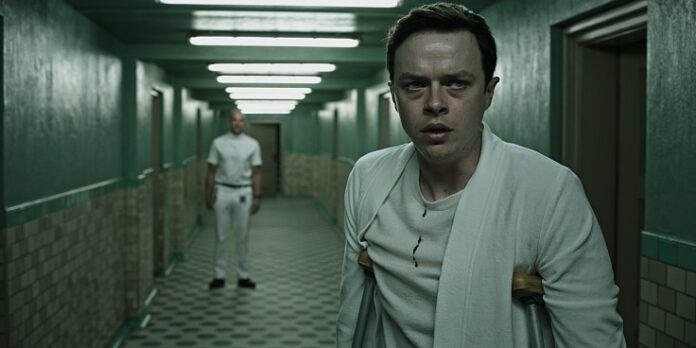 THE STORY – A Wall Street stockbroker (Dane DeHaan) travels to a remote location in the Swiss Alps to retrieve his company’s CEO (Harry Groener) from an idyllic but mysterious wellness center. He soon suspects that the miraculous treatments are not what they seem. His sanity is tested when he unravels the spa’s terrifying secrets and finds himself diagnosed with the same curious illness that keeps all of the guests there longing for a cure.

​Give a director too much power and a script with too many flaws and this is what you get. ”A Cure For Wellness” is trying its hardest to juggle multiple storylines in a mysterious fashion, building up tension and dread as it slogs through its nearly two and a half hour running time, resulting in an ending that is unsatisfying and does not justify all of the plot setup that came before. It also suffers from an unlikeable lead character and a director who simply does not know how to say no in terms of his ambition. “A Cure For Wellness” should have been a new horror classic but instead comes off as a cheap imitation of “Shutter Island.”

Mr. Lockhart (Dane DeHaan) is an ambitious Wall Street sales executive who is looking at serious jail time for shady business dealings from the SEC. In order to make these troubles go away, his company’s board sends him to the Swiss Alps to retrieve the company’s CEO, Mr. Pembroke (Harry Groener), to take the fall for the company and in return Lockhart will receive a promotion and be free. Upon arriving at the “wellness center” Lockhart meets Dr. Heinreich Volmer (Jason Isaacs) who is not being so upfront about letting Lockhart leave with Mr. Pembroke. After a violent car crash leaves Lockhart with a broken leg, he has no choice but to allow the doctors and other caretakers to look over him and provide the same treatments which they have been providing for the patients at the center for years. Lockhart senses that something is not quite what it seems and along with another patient named Hannah (Mia Goth), sets off to uncover the true nature of the facility’s practices and the often spoken about “cure” for what ails the patients.

“A Cure For Wellness” is shot very well. The trailers told us as much. Cinematographer Bojan Bazelli, who previously collaborated with director Gore Verbinski on “The Ring” & “The Lone Ranger” creates a desaturated atmosphere with some striking shots that look even more beautiful due to the outstanding set design. The production of “A Cure For Wellness” is set within the modern day but the production design suggests that it could be taking place during the 40’s or 50’s. There is certainly a gothic/horror vibe that Verbinski and his team are going for here that is based within reality, which helps to give the film a feeling of never knowing what is real and what is not. When this comes to a head within the narrative, that is when “A Cure For Wellness” is at its most effective. However, a third act climax tilts the film’s mood into full blown insanity, resulting in and ending and a story that as a whole, simply does not work.

Dane DeHaan, who has a surprising resemblance to Leonardo DiCaprio from “Shutter Island” in some scenes, is soulless as the lead of this film. We as an audience, have zero sympathies for him outside of a storyline involving the past suicide of his father. On top of that, he’s saddled with on the nose dialogue from this poor script from Justin Haythe with serious lines such as “I didn’t know my father” or “You like puzzles?” one character asks Lockhart and he replies “Not really.” The only performer who seems to be immune to the script’s faults is Jason Isaacs. He’s always been terrific at playing a villain. In “A Cure For Wellness” you’re not so sure if he is one or not with his polite charm that still manages to convey an imminent danger. However, despite this, the script continues to be the film’s greatest downfall as it tries to balance the history of the wellness center, with Lockhart’s past and the mysteries behind Hannah and Dr. Volmer.

“A Cure For Wellness” fails in trying to do so much. In the end, it manages to do so little other than wow us with some intense set pieces (A particularly violent car crash might just be the best scene in the whole film) and haunting visuals. Gore Verbinski never really manages to strike the right tone for the story and is incapable of sucking us into this dark and mysterious world enough to warrant the film’s near two and a half hour runtime. All of this, along with some poor CGI and a bad script creates for an arduous journey, one which I will not be looking to revisit anytime soon.