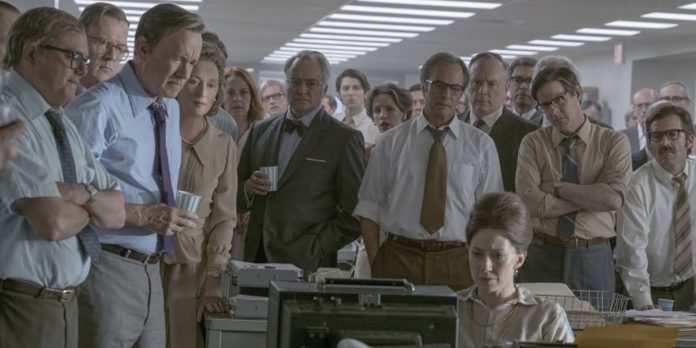 Once considered an unstoppable Oscar juggernaut coming to devour every award ever conceived, Steven Spielberg’s upcoming political drama, “The Post” has all but left the film community’s conversation. It makes sense that we aren’t talking about “The Post” every day. After the initial film festivals made waves, we now know the movies that will be in play this Oscar season and there is tons of greatness available even without the Meryl Streep/Tom Hanks period piece in play. All that being said, the news hit yesterday that “The Post” will have a WGA screening on November 26 and that got me thinking:

Just how is “The Post” going to play this awards season? Click beyond the jump to read more.

Let’s start with the worst case scenario, “The Post” is not a good movie and it becomes apparent all involved rushed it through production in order to be released in the first year of this new President. In recent weeks there have been rumors and twitter conversations about private screenings that have taken place and the word is that the film is no good. Even if we are talking “mediocre” or “divisive,” that would still be under the expectations that have been set. In the scenario “The Post” is a no-show, we can maybe expect to see a lone Streep nomination as it is always safe to bet on Streep.

Assuming “The Post” is as good as we all hope it to be, the worst case scenario is that 20th Century Fox absolutely bungles the Oscar campaign and that the movie is hindered by its late premiere date. While it is not impossible to hit the ground running in the Oscar race (see below), a precedent has been set for how this game is played.

You debut your movie during the festival circuit in September and start building momentum. A narrative is built around the film as its awareness is raised for general audiences. A limited-then-wide release rollout takes place in November or December, continuing to build buzz, all along screenings and events for precursor awards (Critics, Golden Globes) and industry voters. The “Silence” example proved that no matter how good a movie is, sometimes you need an earlier debut and a traditional rollout in order to break into the race.

Option #3: Another Spielberg Hit and a “War Horse” Showing At The Oscars

“War Horse” can prove to be a valuable template for how the campaign for “The Post” can go. That film saw its first screenings in early November with a Christmas release. Though “War Horse” could play up the benefits of being a “family film” (i.e. no politics, family box office numbers), it shows that a Spielberg release can enter the race late and still make a showing. “War Horse” received nominations for Picture, Art Direction, Cinematography and the Sound categories. Not an awards juggernaut, but still a solid Oscar showing for a Spielberg period piece.

Option #4: Overcoming The Late Debut vis a vis “The Revenant”

When it comes to following historical precedent, the folks behind “The Post” have to be looking towards “The Revenant” for a winning playbook. Just like “The Post,” Alejandro G. Iñárritu’s epic saw its debut for a guild audience (SAG for “Revenant,” WGA for “The Post”) in late November before hitting a qualifying release date in December. The movie was a juggernaut in the awards race, showing up all throughout the critics awards, winning Best Drama at the Golden Globes, and taking home the win at DGA. The fact that there was a serious conversation between “Spotlight” and “Revenant” just shows how “Revenant” burst onto the scene.

Though it was a huge hit, we still see why the early debut date is important. The film was still too divisive to win in the era of the preferential ballot. The Oscar campaign struggled between its competing narratives of “we almost died making this movie” and “this movie is in honor of the Native American community.” All of this had to happen pretty much in a single month during the voting process. Maybe a September debut would have hurt the movie (more time to discover flaws), but it is also possible that the film could have built up more fans as there was more time to appreciate it. In the end, the film picked up 12 nominations and 3 wins, but was unable to best the favorite that was “Spotlight.”

We can’t forget just how staggering this movie sounds on paper. Steven Spielberg directing, Josh Singer (“Spotlight”) writing, Meryl Streep and Tom Hanks starring and then one of the most impressive supporting casts in recent memory. Even with all that talent behind and in front of the camera, let’s remember the subject material “The Post” will tackle. This is a film that will tell the story of a newspaper doing solid journalism to put pressure on a President that would eventually resign. Of all the “zeitgeist movies” in 2017, it is very possible “The Post” is the most zeitgeisty.

So let’s look at what the gangbuster approach would be when it comes to expectations. “The Post” debuts to a 95% Rotten Tomatoes score, is has so much buzz that it breaks $100 million at the domestic box office, the script is on point, Hanks and Streep give us career best, two or three of the supporting players are forced into the conversation and we all bow down to the greatness that is Steven Spielberg. “The Post” ends up being an event movie (like “The Revenant”) while also thriving in the preferential ballot (due to mass appeal like “Spotlight). We see over 10 nominations and a Best Picture win (maybe Director goes to a flashier movie like “Dunkirk” or “The Shape Of Water”).

As fun as it was to write that, this is a “stars have aligned” type of rollout. Not only would the film have to be excellent, but it has to overcome all the issues that come with a November/December debut, it is a big hill to climb. Assuming “The Post” is a good movie (and there are those that are questioning that), I think Options 3 or 4 are most likely. I think the film will receive a smattering of nominations, while the wins will go to those who have been in the game since September.

What do you all think? How many nominations do you think the film will pick up? Are you worried about it’s overall quality? Let us know in the comments below!