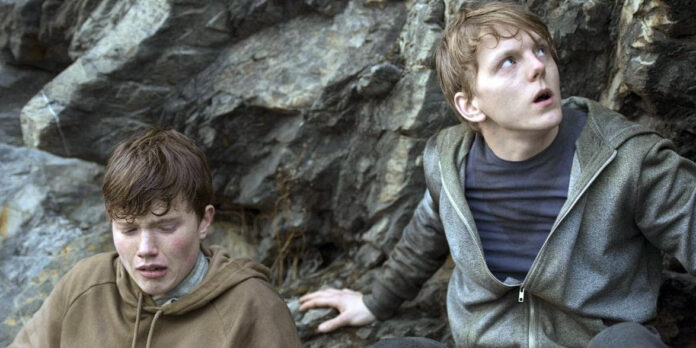 THE STORY – A dramatisation of Norway’s deadliest terrorist attack, in which a right-wing extremist murders 77 teens at a youth camp in 2011.
​
THE CAST – Anders Danielsen Lie, Jon Øigarden & Jonas Strand Gravli

​It cannot be underestimated how extremely difficult it can be to successfully make a film that aims to discuss horrible real-life atrocities that have been committed. It takes an accomplished hand to find the true meaning behind dramatizing these events without feeling exploitative and cruel. There have been successful and unsuccessful attempts at this, but I don’t think anyone would argue that director Paul Greengrass has been very adept in conquering this difficult task. However, this time around, the results are not up to the standard that he is known for delivering.

The film’s plot dramatizes the events surrounding the terror attacks that took place in Norway in 2011. Anders Behring Breivik (Anders Danielsen Lie) killed a combined 77 on that fateful day, the vast majority of them being teenagers at a summer camp. Among the hundreds wounded was Viljar (Jonas Strand Gravli), whose battle toward physical and mental recovery is played out against the ensuing trial where Breivik stands to defend himself. Evidence is gathered by his dedicated yet conflicted attorney (Jon Ølgarden) as the entire country looks to deal with their monumental tragedy.

Greengrass certainly has talents as a filmmaker, and one could see what would draw him to this material. In many ways, it functions very similarly to his exceptionally made “United 93,” another film that attempted to tell the story of a horrific terrorist attack through the gaze of grounded humanity. However, while that film succeeded in finding the power contained in such personalized moments, Greengrass here never comes close to capturing that emotion. The attack itself feels cheaply staged and the fractured narrative never feels like it elevates itself from the collection of clichés it gathers. The emotional catharsis this film attempts to achieve feels shallow and undeserved. Perhaps this could have been achieved with a focused eye on the characters, but this is an area of failing on Greengrass’s script as well.

It’s a real shame that the technical mastery that has often supported Greengrass is significantly diminished here. Hardly any of his previous regular collaborators participate in this film, and none of them is missed more than cinematographer Barry Ackroyd. The film’s cinematography attempts to recapture the docudrama style that is embodied in most Greengrass films, but it also lacks the distilled intimacy those films capture as well. It makes all the sequences feel overtly staged and distant. No doubt there’s a competency to its cinematography, but for material that offers such raw emotions, the filmmaking does not capture that spirit. Even the sound design is generally lackluster, and William Goldenberg’s editing doesn’t rise above anything that feels standard.

With a cast populated mostly by unknowns to audiences, certainly outside of Norway, there are indeed moments for this ensemble to shine. Gravli probably has the most to work with since his character undergoes a physical trauma that must be overcome. His commitment is impressive, but his growth follows familiar paths that have been seen in many character types in the past. His emotional speech at the end is sincerely performed but feels subdued compared to the potential emotion the scene could have had. A stronger sense of his placement within the film’s overall story was desperately needed to sell his emotional journey.

It was obvious that the film did not want to portray Breivik as a raving lunatic, instead choosing to show the calm and collected monster who has complete confidence in his radical thoughts and actions. For his part, Lie captures this persona quite well. However, Breivik’s motivation from alt-right communities that has festered into the ills we see today doesn’t get explored to a meaningful degree. It just feels there’s really no point that the film gets close enough to reveal anything interesting about him. Perhaps it would not have been able to anyway. Lie’s performance is solid but very surface level. The rest of the cast is fine but nobody is really worth for singling out praise.

Whenever I watch a film that deals with discussing such horrific events in the world, a task I always put to myself is to find the true purpose of its existence. To revisit such horrible times must showcase a greater understanding of what these events meant for the people affected and the world that watched. Often times this film wants to show a country in mourning, trying to rehabilitate itself and face the evil head-on. Perhaps there were parallels that Greengrass was reaching for with telling this story and tying it to the Charlottesville riots which occurred last year here in America, in an effort to show the dangers of far-right extremism. Whatever the intent might be, it’s a noble sentiment the film carries that unfortunately is poorly executed. The segmented narratives struggle to find cohesion with each other, leading to the catharsis to feel underserved. The performances are all good, but they are let down by a weak script and less than stellar direction. There’s a lot of good intentions but what could have been a rousing portrayal of a nation that found strength after tragedy instead feels clinical and rather aimless. Greengrass has talent, but it is not put to good use here.​