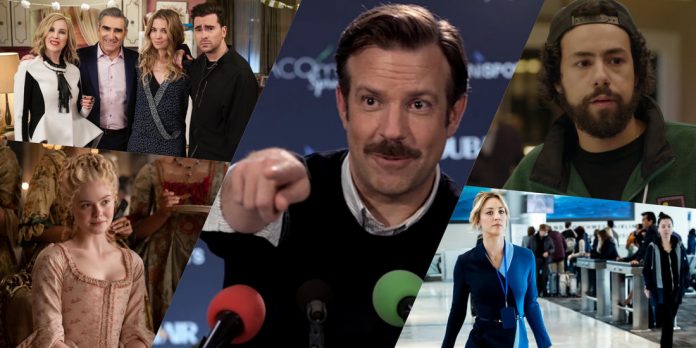 As we continue to approach the delayed Golden Globe ceremony honoring film and television of 2020, I have always found it helpful to preview who the presumptive nominees may be. The musical/comedy category offers a mix of Emmy darlings and new breakouts on the television side. Given previous trends with the Hollywood Foreign Press Association, below are a handful of series worth keeping an eye on for nominations.

While “Schitt’s Creek” has yet to receive any sort of attention from the HFPA, the show’s popularity around its final season and subsequent Emmy victories have positioned it as an undeniable contender. Though many shows late in their autumn years don’t often find much traction, the pure momentum surrounding the success of “Schitt’s Creek” makes it an opportunity that the Globes may not want to pass up.

Hulu’s “The Great” was one of the most buzzed-about new series of the year. And while top-tier Emmy nominations may not have manifested, it’s the type of show that seems to fall right within the HFPA wheelhouse. A euro-centric dark comedy from the writer of “The Favourite” is practically catnip for this group. Add in young stars Elle Fanning and Nicholas Hoult and you have a series that seems poised to do quite well on nomination morning.

When “Ramy” star Ramy Youssef won a Golden Globe last year, it was all the more shocking that his Hulu series wasn’t recognized. The HFPA often loves to get behind shows in their first season, and “Ramy” was a prime opportunity. Yet after an even more impressive second season, the show may have a chance for success yet again. Now, if only the Emmys will follow suit.

One of the biggest breakouts of 2020 is certainly Apple TV+’s “Ted Lasso,” a fish out of water comedy starring Jason Sudeikis as a college football coach who finds himself in the UK overseeing a very different type of league: the English Premier League. What makes “Ted Lasso” so endearing is a combination of witty writing, likable characters, and Sudeikis’s overall winning performance. The show’s combined success and premise make “Ted Lasso” an easy target for the Golden Globes and a series I anticipate doing quite well in February.

One of the final zeitgeist shows of the season comes out of one of the newest streaming services. HBO Max’s “The Flight Attendant” finds Kaley Cuoco in her first starring role since “The Big Bang Theory” ended. Jumping from a sitcom to a thriller format certainly has its risks, but they seem to have paid off in spades for Cuoco, who is receiving the best reviews of her career. Given the late-breaking buzz and star power, it’s difficult to imagine a world where the series and star are left out of the proceedings.

Just under a month to go before nominations are revealed. Who are you predicting? What comedy/musical series do you hope to see nominated?​ Check out my previous post on Golden Globe contenders for Best Comedy/Musical on the film side here. Let us know in the comments section below or on our Twitter account.