“13 HOURS: THE SECRET SOLDIERS OF BENGHAZI” 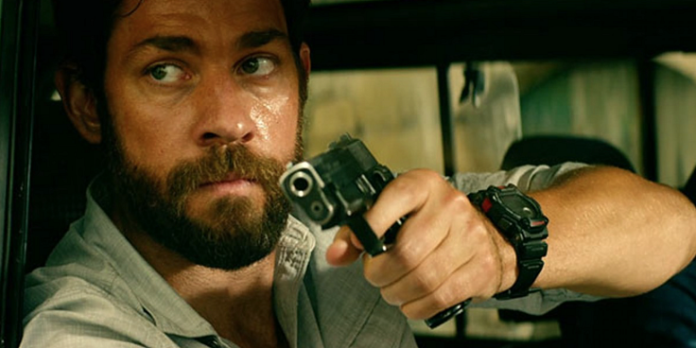 THE STORY – On Sept. 11, 2012, Islamic militants attack the U.S. Consulate in Benghazi, Libya, killing Ambassador J. Christopher Stevens and Sean Smith, an officer for the Foreign Service. Stationed less than one mile away are members (James Badge Dale, John Krasinski, Max Martini) of the Annex Security Team, former soldiers assigned to protect operatives and diplomats in the city. As the assault rages on, the six men engage the combatants in a fierce firefight to save the lives of the remaining Americans.
​
THE CAST – John Krasinski, James Badge Dale, Max Martini, Pablo Schreiber & Toby Stephens
​
THE TEAM – Michael Bay (Director) & Chuck Hogan (Writer)
​
THE RUNNING TIME – 144 Minutes

Michael Bay is right at the top of the list as one of the most commercial filmmakers working today, perhaps even of all time. His films costs millions of dollars and touch deep into our inner teen selves. Essentially what that means is good looking actors, lots of explosions, tons of product placement and immature humor.

The “Transformers” Series is the best representation of Michael Bay’s career. And why wouldn’t it be? It consists of (soon to be) 5 of Michael Bay’s 13 films he has made throughout his 20 year career. His bombastic style and over the top antics don’t veer often into the realm of subtlety. Which is why it is refreshing to see “13 Hours” practice some of that restraint. However, Bay is who he is and what could’ve been a better film in the hands of a better director instead turns into a better than normal Bay film (Admittedly) but still falls victim of his style and handling of the material.

“13 Hours” tells the true story of September 11, 2012 where in Libya Benghazi a team of United States military men working for the CIA were tasked with overwhelming odds to protect the United States Ambassador Chris Stevens from waves of (As they call them in the film) “bad guys.” This team consists of John Krasinski, James Badge Dale, Pablo Schreiber, Dave Denman, Dominic Fumusa and Max Martini.

Michael Bay and Chuck Hogan do a good job of taking the behind the scenes politics away from the film and focus our attention to the men on the ground who fought through the night wave after wave of foreign enemies armed with assault rifles, rpg’s and mortar weapons. However, the soldiers backstories are rushed through at a breakneck pace in the first act not allowing us to connect with them on an emotional level, so when the fighting starts it becomes less about the people involved and more about an “Us vs. them” mentality. It feels like we are overseeing generals in a large scale battle where heavy losses occur but all we care about is the overall outcome. Krasinski is given the lead role here as the man with a family back home (Here comes that cliche again) who is thrust into the brutal country hoping to do one final mission that will allow him to get back home. While Krasinski is fine in the role, most of that has to do with our audience awareness of who he his (That guy from “The Office”) and less about his character Jack Da Saliva. All of these roles are interchangeable and instead of building interesting characters that we can grab onto, Michael Bay instead paints them as cliche everyday American heroes. (For a better example on how to build character’s in a similar film check out “Lone Survivor.”)

Due to the lack of character in this film, Bay’s usual tendencies come out even when the film is so close to being unlike anything else he has done before. Cringe inducing lines such as “Just another night in Benghazi” are heard throughout the film and break the tension in ways that are unearned and out of place. On the nose symbolism is thrusted into our faces (An American flag being riddled with bullets, really?!). And while Bay will say that they made the right move in taking the politics out of it, one has to wonder if that would’ve made for a more ambiguously challenging film, which if handled delicately could’ve presented something more unique than the simple shoot em’ up good guys vs. bad guys film we got instead.