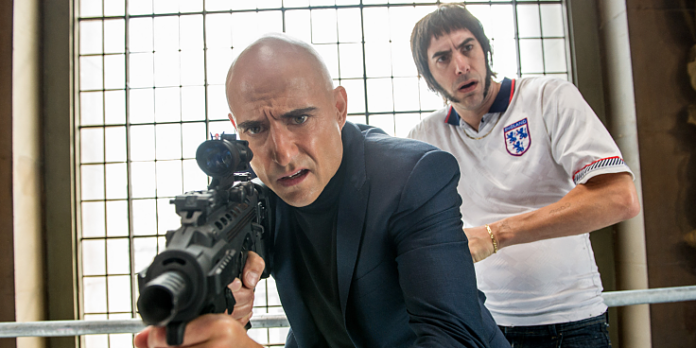 THE STORY – Dimwitted Nobby (Sacha Baron Cohen) lives in an English fishing town with his loving girlfriend (Rebel Wilson) and nine children. For the last 28 years, he’s been searching for his long-lost brother Sebastian (Mark Strong). When the two finally reunite, Nobby finds out that his sibling is a top MI6 agent who’s just uncovered a sinister plot. Wrongfully accused and on the run, Sebastian now realizes that he needs Nobby’s help to save the world and prove his innocence.

Sacha Baron Cohen is extremely talented. There is no denying the man’s comedic talent, his singing ability and his skill at inhabiting wholly original characters who he has built from the ground up. However, he has been caught up in a rut of trying to constantly top himself with every new character he creates attempting to capture audience’s imagination and adoration the same way he did on television with Ali G and in theatres with Borat. That repetitive display of shocking antics which Sacha Baron Cohen has been using to entertain audiences has reached a breaking point for us with his latest film “The Brothers Grimsby.”

​Mi6’s top assassin Sebastian (Mark Strong) is the best at his job. He is the total embodiment of the “cool spy.” His brother Nobby (Sacha Baron Cohen), is the exact opposite. Loud, offensive, crude and a huge lover of the football club Chelsea, Nobby has 11 kids, a wife two sizes larger than him (Rebel Wilson), and yet he misses his brother who he was separated from when they were children. When Nobby receives word that his brother has been found in London, he sets off to reconnect with him. Instead, he sets off a chain of events which will put the two brothers on the run from their own government with shocking results.

Right away, “The Brothers Grimsby” comes storming out of the gate with its extremely fast paced narrative. The film runs at an excessively short 83 minutes and doesn’t give the audience a break to catch their breaths and allow us to enjoy the characters and the situations they get caught up in. This is “The Brothers Grimsby” greatest flaw as the set pieces get bigger, louder, more shocking and grosser by the minute resulting in a numbing experience for our intellect. What am I supposed to take away from watching Mark Strong shove his male private parts into the face of Sacha Baron Cohen? Or watching an extremely graphic sex scene involving our main characters and a herd of elephants? Where Sacha Baron Cohen has attempted to insinuate social commentary into his past films such as “Borat: Cultural Learnings of America For Make Benefit Glorious Nation of Kazakhstan” (Whew) or “Bruno,” here he is simply playing a silly character for gags that grosses us out more than make us laugh.

Mark Strong is actually the more enjoyable of the two as he is playing the straight serious role caught up in ridiculous situations that we’ve never seen him in before. It’s more enjoyable to watch Mark Strong’s facial reactions to Nobby than it is to watch Nobby himself. The rest of the supporting cast don’t add much to the film as they neither have a standout scene nor contribute much to the plot. This is Sacha Baron Cohen’s show and he does everything he can to make it as memorable as possible. Unfortunately, he is let down by a screenplay which relies solely on a simple message of brotherly love to carry the film’s only great takeaway. So I had to watch some of the grossest, inhumane, silliest bits of comedy I’ve seen in quite some time to walk away thinking “Brothers should love each other and work together?” Yeah, no thanks.

As stated before, we are very lucky that the film is only 83 minutes long. For if it were any longer, I probably would’ve walked out of the theatre due to the inappropriateness of every aspect of the film. There is only so much stupid and offensive humor I can take with little to no substance in such a condensed amount of time. “The Brothers Grimsby” may very well come to represent the worst of Sacha Baron Cohen and his crazy hijinks. However, if you’re looking for a quick film to shut your brain off to for under an hour and a half with no real message nor redeemable qualities, then this is the film for you.