You’ve Only Got One Shot: The History Of The One-Shot Film 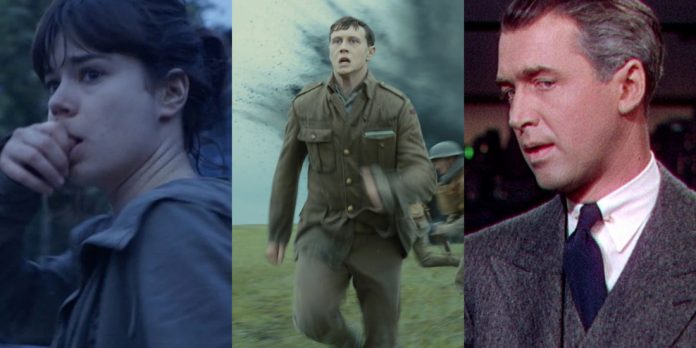 Cinema has always been an experimental art form and one which has seen creatives constantly pushing the boundaries of storytelling and embracing new technologies. The flavor of the month seems to be the one-shot film; whether it be Sam Mendes’s “1917” and Alejandro G. Iñárritu’s “Birdman,” which were edited to appear to be one continuous shot, or Sebastian Schipper’s “Victoria” and Erik Poppe’s “Utøya: July 22,” which actually were shot in a single continuous take. However, this hasn’t been a recent obsession of filmmakers. In fact, the master of suspense himself, Alfred Hitchcock, utilized the technique with his crime drama, “Rope,” way back in 1948.

Hitchcock was so obsessed with this little experiment that he went to great lengths to ensure that the filming went smoothly by having movable walls on wheels that could be moved in order to make room for the camera. To mask the edits, Hitchcock would have the camera zoom in on the back of one of the actors and then zoom out. Famously, James Stewart (who starred in the film) was very frustrated by this and stated in interviews that he personally didn’t think the film worked.

The film received rather mixed reviews with many critics stating that the one-shot technique was a distraction to the narrative. In Roger Ebert’s 1984 review of the film, he states that Hitchcock called “Rope” “an experiment that didn’t work out,” and that he was “happy to see it kept out of release for most of three decades.” In an interview with director François Truffaut, Hitchcock expressed his frustrations: “I was breaking all my own tradition of using film, in the cutting of film, to tell a story.”

Hitchcock was limited by the technology of the day as cameras could only shoot for periods lasting up to 10 minutes, which was the length of a magazine. As technology advanced, more filmmakers attempted to perfect the one-shot. Over the years there have been various films that have featured scenes shot in long takes. Perhaps the most famous is Orson Welles’ “Touch of Evil” which opens with a continuous shot following the movements of a bomb hidden in the trunk of a car. Robert Altman’s opening shot for “The Player” (which was also shot in one take) would pay homage to Welles’ “Touch of Evil” by having two characters discuss the film as they walked around the studio lot.

However, it wasn’t until the technology made advancements and cameras became digital that we saw the one-shot film become more prevalent in cinema. Prior to digital cameras, in 1982 Hungarian filmmaker Béla Tarr filmed “Macbeth.” The film consists of just two shots: the first shot, which takes place before the film’s titles, is five minutes in length, and the second shot is 57 minutes. While the film is described as being confusing and hard to follow, many applauded Tarr for his experimental take on the Shakespearean play, with Jeremy Carr from Senses of Cinema calling it “a bold stylistic exercise.”

​The beginning of the new century saw Mike Figgis’ experimental film “Timecode,” which consisted of four continuous 93-minute takes. These takes were filmed simultaneously by four cameramen using digital cameras and the end product sees the screen being divided into quarters so the four shots are shown simultaneously. In the film’s trailer, it’s boldly claimed that there are “no edits,” and the film is told in “real-time,” with the poster asking, “Who Do You Want to Watch?” While viewers may be initially wary of watching what is essentially four films being shown at once, Figgis increases the volume of the dialogue for the film that he wants the viewer to pay attention to and lowers the volume for the other three.

Russian filmmaker Alexander Sokurov’s experimental film “Russian Ark” (2002) tells the story of an unnamed narrator wandering around the Winter Palace in Saint Petersburg, where he encounters various real and fictional people from different periods of the city’s history. Sokurov was apparently fed up with editing and wanted a film “that unfolded its subject in a single breath.” “Russian Ark” was recorded in a single 96-minute Steadicam sequence shot and there was a cast of over 2000 actors. There were four attempts to shoot the film after the first three attempts failed and there was only battery life for one more go. Luckily, Sokurov and his director of photography, Tilman Büttner, managed to successfully shoot the film in one take.

Several more one-shot films came out in the 2000s, but perhaps one of the most well known is Sebastian Schipper’s “Victoria” (2015). The film’s tagline reads: “One Girl. One City. One Night. One Take.” Schipper and cinematographer, Sturla Brandth Grøvlen, only had three attempts to shoot the film and had even shot a backup version of the film over a 10-day shoot. In an interview, Schipper states that he wanted to film “Victoria” so he could do something outside the box, and describes the one-shot film as “a mystical island,” going on to state that “there was no reference, and that’s a big challenge because you have to learn everything, all the creatures on the island, all the rules.”

Since “Victoria,” there have been several other one-shot films, including Woody Harrelson’s “Lost on London,” which was shot and broadcasted live into theatres. However, perhaps one of the most effective and impactful films to be shot in a single take is Erik Poppe’s “Utøya: July 22” which depicts the events of the Utøya summer camp massacre that took place on July 22, 2011. In an interview with Filmotomy, Poppe states that he made the decision to shoot in one take “so there would be no distractions, the viewers would sit and see the movie, and be reminded of the real event.” He continues by saying, “You can strip it down to the victim, this is their story. If you are going to make a movie about 22nd July, then this is very important.” It certainly pays off here, as “Utøya: July 22” is one the most important films to emerge from the last decade.

So, from Hitchcock’s experimental attempt with “Rope” to Mendes’ “1917,” the one-shot movie is clearly more than just a gimmick. It’s an obsession that drives many talented filmmakers who all strive to perfect this most difficult task. Films such as “Russian Ark,” “Victoria” and “Utøya: July 22” prove that this is more than just a gimmick, it’s an effective form of storytelling which hopefully is here to stay as we begin a new decade of filmmaking. ​

Do you have a favorite “one-shot” film? What did you think of “1917” and how it used this technique? Let us know your thoughts in the comments section below or on our Twitter account.