“YOU SHOULD HAVE LEFT” 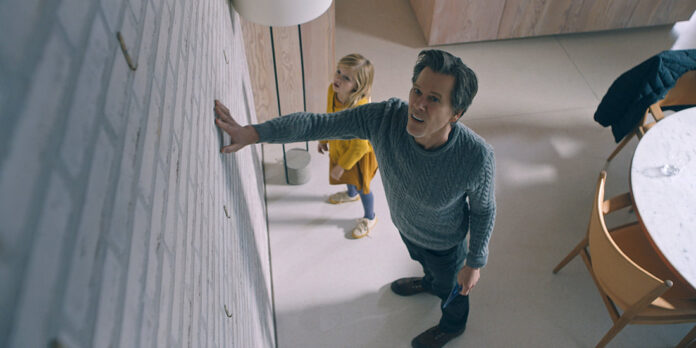 THE STORY – Strange events plague a couple and their young daughter when they rent a secluded countryside house that has a dark past.

​​​​​Looking to capitalize on the success of their mega-hit release earlier this year, “The Invisible Man“, Universal Studios (along with Blumhouse Productions) is giving us the re-teaming of “Stir Of Echoes” star Kevin Bacon and director/screenwriter David Koepp (“Secret Window”) with “You Should Have Left.” With a trailer that was only released last week and a small embargo window to write this review in from the time the film was made available to screen for critics, it’s clear that there is a lack of confidence in this project from the studio and it shows in the final product. “You Should Have Left” is a movie that should have left a larger impression but due to poor writing and execution, it comes off as a pale imitator to far greater horror films we’ve seen lately.

Theo (Kevin Bacon) is a successful banker who, along with his actress wife Susanna (Amanda Seyfried), decides to get away from their home and rent a house in the Welsh countryside with their daughter Ella (Avery Essex). Fueled by jealousy, insecurity, and his troubled past, Theo begins having nightmares in the house that manifest into real terrors that seek to have him come to grips with his past.

Based on the novel by German author Daniel Kehlmann (“Measuring the World”), it’s hard to watch this modern-day horror film and not see what kind of a story Koepp was trying to tell here. Theo is a middle-aged white man who’s success in life, he admits, has come too fast and easy for him. He’s twice the age of his younger wife, who also happens to be a film actress. And he’s living a life in the shadow of a false accusation which tarnished his reputation in the aftermath of his wife’s “supposed” suicide. Koepp is telling the story of guilty men, in the aftermath of the #MeToo era who may not have been proven to be guilty for their sins yet but will be judged by some other means, whether that’s internal or external. The metaphor for this reckoning takes shape in the form of this beautiful Welsh house Theo takes his family to so they get away from all of the troubling noise and media attention in his life.

While Theo is shown to be a caring husband and loving father, we’re never given any insights into why Susanna loves him and why she believes he’s innocent. And although their age-difference is mentioned in the screenplay a few times and plays into Theo’s insecurities about his relationship with Susanna, it’s never woven into the story in a more meaningful way to highlight the film’s themes. Instead, Koepp chooses to have Susanna exit the film in its third act, leaving us with typical horror-movie house cliches, un-scary jump scares, and an all together muddled message.

Kevin Bacon does a solid enough job trying to take us through this man’s inner-torment about his past and the desperation to keep his new family safe from an unknown entity that dwells within the house (that also takes the form of a creepier Kevin Bacon with a disturbing, voice and covered in makeup and prosthetics to make him look somewhat different). Amanda Seyfried was a definite highlight and I actually was believing her chemistry with Bacon in the first act until her as previously mentioned, abrupt exit from the film so the narrative could switch focus over to its male lead. And Avery Essex is the glue that holds the entire film together. To some, it may be just another manipulative cute child performance but it’s the most important role in the film, for without her I’m pretty sure I would have had little to no emotional investment in Theo’s journey.

“You Should Have Left” has some beautiful shots of the Welsh countryside and the house that Theo, Susanna, and Ella choose to stay in is also visually splendid. The cinematography and production design all look great but without a meaningful screenplay, it’s all for naught. And that’s where I am with Koepp’s latest. It may be great to see him delivering something dark and supernatural once again instead of the disaster that was “Mortdecai” but this is one horror attempt you should leave alone.