​“See, there’s a catch, Catch-22. Anyone who wants to get out of combat duty isn’t really crazy.” This is the reply from Dr. “Doc” Daneeka (Jack Gilford) to Alan Arkin’s Captain John Yossarian when he asks whether he can be declared crazy in order to be grounded. Yossarian, along with his buddies Captain Orr (Bob Balaban), Lt. Nately (Art Garfunkel), and Lt. Dobbs (Martin Sheen), have flown countless missions with their commanding officer, Colonel Cathcart (Martin Balsam), continually increasing the number of missions they must perform before they can be switched out. Naturally, this all begins to take its toll, not just on Yossarian, but on his fellow squadron members. They don’t have to be crazy to fly, but it certainly helps.

​Published in 1961, Joseph Heller’s “Catch-22” wasn’t exactly a hit upon its first release, but slowly caught the feverish attention of the new generation of baby boomers who identified with Yossarian, a character who seems detached from the craziness that surrounds him. The book’s strong anti-war and anti-establishment themes also connected to this young, rebellious generation. Heller himself had been a bombardier during WW2, but his critique towards the government and his anti-war sentiment was in response to the Korean War, the Cold War, and McCarthyism which was spreading throughout American society at the time.

Originally, Heller’s novel wasn’t called the catchy “Catch-22,” but rather “Catch-18”; however, the novel’s name was changed before release to avoid confusion with Leon Uris’ new novel, “Mila 18”. Nowadays, the phrase “Catch-22” has become fully integrated within our society and often refers to a paradoxical situation from which an individual cannot escape because of contradictory rules or limitations.

Heller’s “Catch-22” was deemed “unfilmable” by many thanks to its confusing, non-chronological plot with certain events being described by different characters. However, by 1963, the book had sold over 1.1 million copies, so if someone crazy enough could conceive a screenplay out of the novel, then surely a studio would have an instant hit on their hands? You would have to be crazy to try and adapt this novel, but where Hollywood was concerned, you would have to be crazy not to. Ironically, “Catch-22” was experiencing its own catch-22. Originally, Columbia managed to secure the rights to the novel but the property exchanged hands to Paramount. 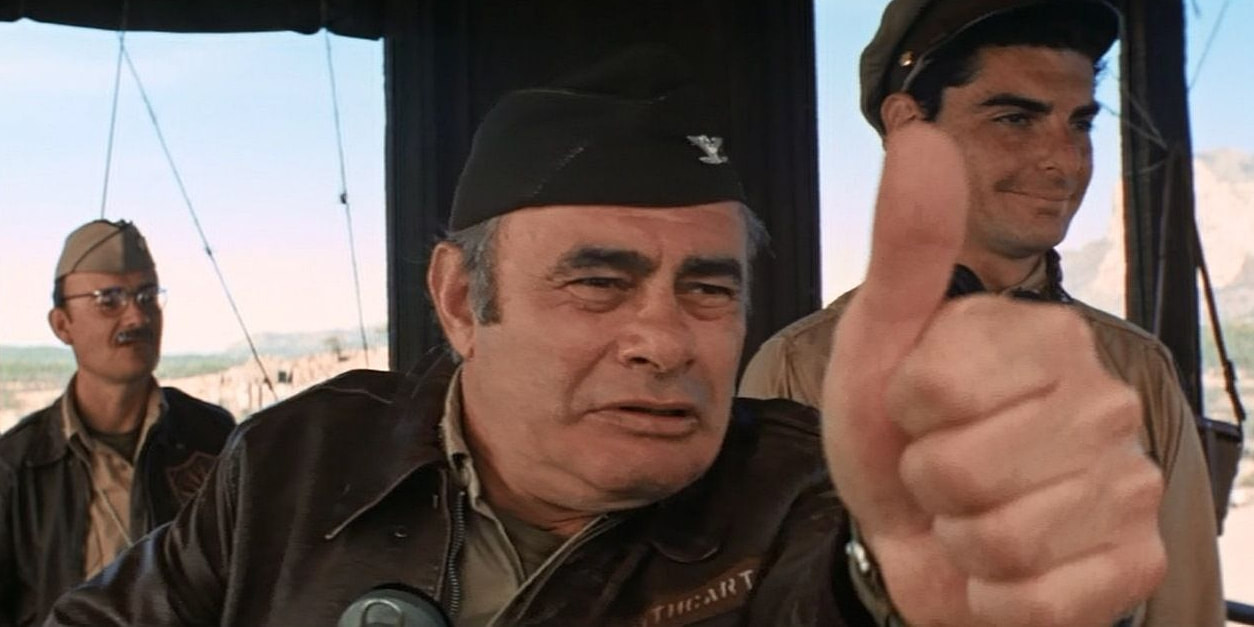 It would take eight years to get it from page to screen, with several people flirting with the adaptation. According to a New York Times article from 1969 by Nora Ephron, the project moved from the hands of “Richard Brooks (who did little or nothing with it for three years) to Mike Nichols, from Jack Lemmon (who originally wanted to play Yossarian) to Arkin, and from one unsuccessful treatment by Richard Quine to four drafts by Buck Henry (whose previous film credits include ‘The Graduate’ and ‘Candy’).”

So, how did we wind up with “The Graduate” director Mike Nichols directing the film adaptation of “Catch-22”? After the successes of “Who’s Afraid of Virginia Woolf?” and “The Graduate,” Nichols essentially had the freedom to pick his next project. Perhaps high on the success of “The Graduate,” and buzzing from his recent Best Director Oscar win, Nichols decided to be the crazy man who would film Heller’s “Catch-22”. Teaming up with “The Graduate” co-screenwriter Buck Henry, Nichols spent two years trying to make a conventional film narrative while also trying to capture the essence of the novel and its themes.

Nichols and Henry made some major changes to the book’s plot, leaving out several subplots and only included one event being shown in Yossarian’s flashback despite the novel having several different ones. Paramount gave the 37-year-old director a generous $17 million budget. The cast is certainly one of the most impressive elements of the film, featuring already well-established actors as well as up and coming stars of the time.

The film’s main star, Alan Arkin, had recently received an Oscar nomination for his first big-screen performance in “The Russians Are Coming, the Russians Are Coming”. Co-starring alongside Arkin are the likes of Jon Voight (who plays Lt. Milo Minderbinder, a creepy, capitalist and opportunist), “Psycho” star Anthony Perkins who plays the friendly chaplain, Capt. Fr. A. T. Tappman, as well as the pre- “Apocalypse Now” Martin Sheen. Even Charles Foster Kane himself, Orson Welles, makes a cameo as Brigadier General Dreedle.

Looking at the end product, it isn’t hard to see where that $17 million budget went aside from the film’s cast. The film features some impressive aerial footage, with Nichols using actual B-25 Mitchell aircrafts which had to be repaired at a cost of $10,000 each (there were 18 B-25’s used). The film’s flying sequences took six-months worth of the allocated production time to shoot.

Both Nichols, producer John Calley, and designer Richard Sylbert had already taken an entire year to find the perfect filming location (Italy had changed so much after the end of WW2 that it no longer resembled the vision of Italy from the novel). They decided on the location of Guaymas, Sonora, and spent a further $180,000 to build the five-mile highway plus $250,000 more for the 6,000-foot runway. Unfortunately, during filming, the second unit director, John Jordan, fell to his death after refusing to wear a harness during a bomber scene which led to him falling out of the open tail turret at 4,000 ft (1,200 m).

As a film, “Catch-22” is alienating, confusing to follow, and surreal to view. It may not be exactly faithful to the novel but it captured its spirit. Arkin and the rest of the cast deliver exceptionally great performances and Nichols and Henry managed to carefully balance the story’s darker elements with some genuinely laugh-out-loud satirical moments. However, the film wasn’t the success that the studio had hoped for.

A few short months before “Catch-22” had been released, another anti-war, satirical black comedy had exploded onto the screen: Robert Altman’s “MASH”. It stole away the audience’s attention from “Catch-22,” with even Nichols admitting to Peter Biskind in the novel “Easy Riders, Raging Bulls,” that “[they] were waylaid by MASH, which was fresher and more alive, improvisational, and funnier than ‘Catch-22’,” and that “it just cut [them] off at the knees.” The film would only manage to make $24 million at the box office, with the critical response being a mixed bag.

Heller’s “Catch-22” continues to appeal to readers to this day, with Hulu releasing a mini-series last year. While Nichols’ adaptation of “Catch-22” isn’t exactly perfect, it’s still worth revisiting and has aged remarkably well. For an adaptation of a book deemed “unfilmable,” Nichols and Henry proved they were the right amount of crazy to try and make the impossible possible.