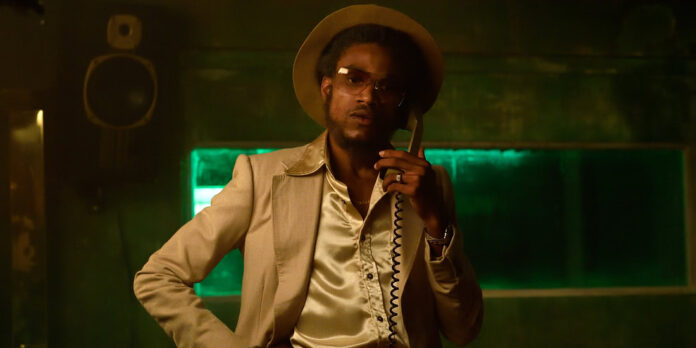 THE STORY – Years ago while growing up in Jamaica, D witnessed his brother’s murder, before being taking in by a don. Years later, having been sent on a mission to London, the past catches up with him.
​
THE CAST – Aml Ameen, Stephen Graham & Akin Gazi

​​​The path of an actor making the turn into directing is one that is commonly seen. It certainly makes sense as well, since the best opportunity to procure knowledge about the skills needed to be employed to direct a film is actually observing them on a set. It’s actually quite a brilliant form of film school, and many actors have used that time to harness their own abilities to create something pretty stunning. However, with many directorial debuts, the results can often be mixed. With Idris Elba stepping into the director’s chair for the first time, these results end up being quite similar.

“Yardie” tells centers on a steadfast young Jamaican man named Dennis (Aml Ameen), who also goes by the nickname of ‘D.’ Ever since witnessing his brother’s death at the hand of gangland violence, he has been in the employ of the local crimelord and record producer King Fox (Sheldon Shepherd). D is still consumed with the thought of avenging his brother’s death, and in an effort to cool him down, Fox sends him on a drug delivery to London. However, while there he is ensnared in even more trouble, ranging from the wrath of fellow gangster Rico (Stephen Graham), the contentious relationship with his girlfriend Yvonne (Shantol Jackson) and the possibility he may be on the trail of his brother’s murderer.

As previously stated, this being Elba’s feature film debut does carry some of the rough hallmarks of most first-time directors. The storytelling is chiefly the biggest problem the film encounters, with a jarring pace and rather sloppy editing that struggles to create a real sense of momentum for the film. At the same time, one does appreciate a rather authentic perspective being brought to this world, and Elba deserves credit for establishing a visually appealing aesthetic that feels engaged by these characters. Much of it feels like influence from his “Beasts of No Nation” director Cary Joji Fukunaga, and it is certainly appreciated.

​Truthfully, the biggest hindrance to the film’s success is not Elba’s direction but the script he is given. The story indulges in a simple method that never reaches for anything truly nuanced or complex. There’s a ‘rise to power’ character arc that takes on a predictable path and much of the dialogue is rather weak, particularly with exposition-heavy narration. Its structure never successfully conveys the passage of time, leaving many scenes to feel disorienting. The obvious thematic conclusions concerning the necessity to move on from death are blatant and uninspired. The story does not transcend the typical gangster genre trappings to become something truly unique and instead settles for mediocrity at nearly every turn.

As far as the performances go, it’s an ensemble that feels a bit inconsistent. Ameen does an adequate job of centering the film, though it’s sometimes difficult to say if the perceived struggles of connecting to this performance are his own, a failing of the script or a lack of engagement from Elba’s direction. Overall, he’s a solid foundation to the film, but nowhere near that exceptional. Most can be said for the rest of the actors as well, who all manage to portray their parts in a satisfactory manner without being extraordinary.

The only real exception to this is Stephen Graham. Probably the most recognizable actor in the cast, his persona as a white gangster with a Jamaican accent just comes across as unmotivated and too peculiar. But there is a collection of low-level British criminals that are somewhat charming, particularly a trio of wannabe DJs, headlined by Calvin Demba. He provides the best moments of comedic relief that is quite enjoyable. In truth, most of what transpires in London indulges in the most entertaining parts of the film, and whenever the focus pulls away from this world is when the film suffers.

There are a few redeeming qualities in this film, for sure. Some of the performances are enjoyable to watch, even though others are distractingly misused, and Elba’s potential as a director is on display here. But ultimately, “Yardie” never takes off in a way that makes it truly engaging, and the story does not become anything more than its basic execution. Plenty of films that take place in the criminal underworld have explored similar territory, and sadly the film does not rise above those that came before. At the same time, the admirable qualities of the film do make it an interesting start for Elba as a filmmaker, and I am curious to see where the path will take him next.