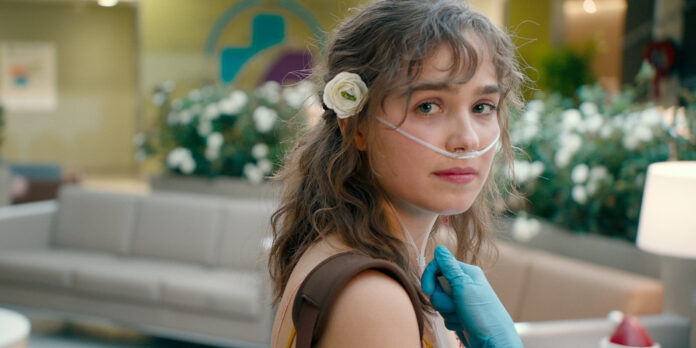 THE STORY – Seventeen-year-old Stella spends most of her time in the hospital as a cystic fibrosis patient. Her life is full of routines, boundaries and self-control — all of which get put to the test when she meets Will, an impossibly charming teen who has the same illness. There’s an instant flirtation, though restrictions dictate that they must maintain a safe distance between them. As their connection intensifies, so does the temptation to throw the rules out the window and embrace that attraction.
​
THE CAST – Haley Lu Richardson, Cole Sprouse, Moises Arias, Kimberly Hebert Gregory, Parminder Nagra & Claire Forlani

​​We’ve reached peak levels of content in recent years, and film and television are doing whatever they can to stand out. No genre is impervious to this trend, not even trope-filled, pulpy young adult stories. Rarely do audiences want to see white bread romances anymore. Now, there has to be some kind of a catch. This, paired with a desperate need for more diverse voices and stories in films could potentially make for some incredible movies with inspiring subversions of expectation. “Five Feet Apart” shoots for that, becoming one of the first mainstream films about those affected by Cystic Fibrosis and the life complications that come with that. And as a story, “Five Feet Apart” is somehow heartbreaking, uplifting, and encouraging all at the same time. Unfortunately, it ends up falling into the same traps as its predecessors, with uncomfortable performances, less-than-stellar writing, and essentially no pacing.

“Five Feet Apart” is about Stella (Haley Lu Richardson), a girl who has grown up with Cystic Fibrosis (CF) and has been in and out of the hospital her whole life in order to manage her treatments. The opening scene tells us that she has loving friends (including fellow CF-er Poe, played by Moises Arias), OCD, and a routine with the nurses at the hospital that she has called home for at least part of her life. In walks Will (Cole Sprouse), a bad boy who cares about nothing, including his own uniquely terminal case of CF. You see, Will has a special bacteria that could kill him, and any other person with CF, very quickly. Since Stella has OCD and Will is the boy the story needs her to fall in love with, she can’t stand the fact that he doesn’t take care of himself. They strike a deal where they will do their treatments together as long as Stella lets Will draw her because also he’s an artist; yes, this deal is the first mention of that. And so our tragic love story begins.

Before even walking into the film, I was nervous about my own personal biases. I’m not really a fan of Cole Sprouse or his particular brand of “mean-mugging” as acting. I’ve seen his performance on “Riverdale” and other teen-centered products and while I think it can work in self-aware contexts, the constant negging and frowning seems far too cliché to work in a bonafide drama. Honestly, at first, I thought I was being proven right. Will is all smirks and sex jokes from the beginning, but as the plot starts informing his character choices, I was more and more on board with his portrayal. His performance especially flourishes once he has to convey the internalization of his situation and what he risks by falling in love with Stella. Haley Lu Richardson’s performance is simply great; probably the most consistent part of the entire film. She is able to float the audience through the rough first act enough to get to the genuinely pleasant and touching middle. Richardson and Sprouse have good chemistry together, and when the writing allows them, they are able to portray these star-crossed lovers with the passion they deserve. Disappointingly, the writing does not always allow this chemistry (or Sprouse’s perhaps luck-based balance) to shine through, which becomes especially apparent by the final act.

I feel that these actors were destined to struggle because of the screenplay. There is very little pacing involved here, and almost no room for character development. It feels as if there are three or four climaxes spread through the entire film; for example, the titular scene appears about halfway through the runtime and is played as if it will end up being the thesis (spoiler: it won’t). However, my most egregious complaint is the fact that this relationship only grows when the plot demands it to, and often in the most unnatural feeling ways. Will and Stella’s budding love follows the path nearly all YA love stories take: they meet each other, they hate each other, they love each other, they fight, and finally, they make up. There are a few interesting twists caused by the presence of CF, but the main story beats remain the same. And each time their relationship grows, it feels as if there is no reason for it to do so. They fall in love because the writers want to do something which requires that they be in love, so I get whiplash wondering why in the world would these characters say those things? Why do they hate each other if they just met? Why are they mad at each other when a similar situation from earlier didn’t affect them? Instead of the characters driving the plot, the plot drives the characters, and I’m left feeling like I never really got to know them as people because their motivations did not stay consistent. The film flourishes when the development is static, but when a moment of growth occurs, it loses all of the trust it had gained in the two or three scenes before. And then when it ends, it just ends, with no real sense of closure. The problems the two of them face aren’t solved, they are simply pushed aside, left to be tackled a different day by a different couple.

All in all, this movie is just fine. The actors are attractive and the story works, at the very least conceptually. It has the usual YA nonsense that I love to hate and hate to love, like having an absurdly well-known and sad soundtrack (see: The Postal Service and multiple tracks by Daughter), and a few physically cringy lines. It is saved by some wholly sweet and genuinely well-acted moments, but I don’t think it’s the film that CF’ers deserve. It’s good teen fodder, and it’s good that it treats the main characters like people who also have CF and not just CF people. As long as you keep your expectations in check it’s enjoyable. Just don’t expect much more than that.