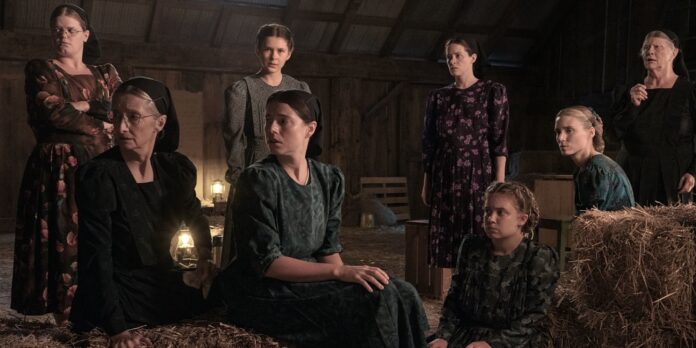 In what will go down as one of the heartwrenching and thought-provoking films of the year, actress-turned-director Sarah Polley has reached a new pinnacle in her career with “Women Talking.” Adapted from the 2018 Miriam Toews’ novel of the same name, Frances McDormand optioned the book (she also acts in the film and serves as a producer) and brought Polley on board to beautifully tell the equally harrowing and moving story that will elicit profound thought and feeling from all those who watch it. Although it may be a COVID production due to its confined barn setting for the majority of its story, that doesn’t make it any less engrossing or relevant. In fact, the story is set in the modern day, but given the period clothing the women are forced to wear and the centuries of misogyny that have continued to be prevalent today, this story could take place at any point in time, making it a timeless film.

Near the beginning, the film boldly states that “What Follows Is An Act Of Female Imagination,” instantly letting us know that what we’re seeing is a fable of sorts. However, the parallels between these women’s isolated religious colony and how today’s still male-dominated society views and treats women (and would horrifically want to treat them if given the opportunity) are just as terrifyingly real as ever before. Comparisons to Margaret Atwood’s “The Handmaid’s Tale” will abound, but this is definitely a more self-contained chamber piece that highlights each of the amazing actresses (and actor). It’s an emotionally grueling tale of women coming together in body, heart, mind, and spirit to debate, exchange ideas, and thoroughly discuss the decision they must make (for doing nothing is completely off the table): either stay and fight or leave. In what could be considered a female version of “12 Angry Men,” we’re entirely engaged in the monstrosity that’s been inflicted upon these women, not because we actually see the violence (it’s all implied through brief and startling flashbacks, perfectly punctuated by the most unnerving parts of Hildur Guðnadóttir’s evocative score), but because each of the actresses does an incredible job highlighting their character’s reactions to it. We understand each of their strengths and weaknesses through the simple exchange of ideas.

There are three families. There’s the eldest, Agata (Judith Ivey); her oldest daughter Ona (Rooney Mara), who’s pregnant; her sister Salome (Claire Foy); and Neitje (Liv McNeil), Salome’s niece. The other family consists of the eldest, Greta (Seila McCarthy), her oldest daughter, Mariche (Jessie Buckley), her daughter Autje (Kate Hallett), and her younger sister Mejal (Michelle McLeod). And then, there’s a third family (not featured as prominently except for the story’s beginning and end) led by the facially scarred Scarface Janz (Frances McDormand), her daughter Anna (Kira Guloien), and granddaughter Helena (Shayla Brown). Each woman has their own reasons to stay and do nothing (Scarface’s position), stay and fight (the hot-headed Salome once tried to fight back to protect herself and her four-year-old daughter and will gladly do so again if she must), or leave (an opinion held by the majority of the group). They must all come to a decision unanimously. But there are so many considerations to take into account for each choice. If they leave, how will they fend for themselves? If they stay and forgive the men, they believe they will enter the kingdom of heaven – but is it forgiveness if it’s forced? What about the younger boys in the colony who are innocent? Will they be allowed to come with the women if they leave? The women discuss all the pros and cons of leaving or staying, with Ona asking the most questions about each woman’s suggestion as they’re brought up. It’s a riveting exercise in how to craft dialogue as they question the systems of power and oppression they have had forced upon them all of their lives. They were led to believe that either ghosts or Satan were conducting their nighttime sexual assaults (while sedated by cow tranquilizer as they were sleeping) instead of the colony’s men (which is later proven when one is caught in the middle of the night). And in a community so steeped in faith, so too must be their conclusion as they wish to set an example for all women who come after them.

It’s weighty stuff Polley is dealing with in what is undoubtedly her finest film to date. Her screenplay allows each actress a chance to breathe and communicate to the audience who each of them is through their intellect, feelings, and experiences. You will be hard-pressed to find a better ensemble this year as every actress makes the most of what they’re given and packs an impassioned gut punch. The standouts are Mara, Foy, Buckley, and the lone male actor in the group, Ben Whishaw, who plays the sensitive August Epp, a headmaster for the boys of the colony who was excommunicated (and thus has the women’s trust) and is tasked by the women with taking the minutes down for their meeting. While Mara is intelligent and commanding in her scenes with the women, her tender chemistry with Whishaw melts your heart. August has a crush on Ona and wishes to take care of her and her unborn child, and the way Whishaw maneuvers through these emotions is nothing short of heartbreaking. Foy and Buckley are filled with fiery volcanic rage as fierce mothers who will do whatever it takes to protect their children, but they express it differently. Each is given showstopping monologues which will take your breath away, and Buckley, in particular, is given some of the film’s very few laughs (it’s said that the harder a character laughs, the harder they want to cry) as the cutaways to her facial expressions in response to some of the suggestions being proposed at the meeting express her frustration and an overwhelming desire to see action taken. What happens to her in the third act especially is shocking and upsetting, but her character’s steely resolve allows Buckley to turn in yet another memorable performance.

Polley opts for a muted color palette, shot in widescreen (courtesy of cinematographer Luc Montpellier), and although it’s not my personal preference for a film’s visual aesthetic, the creative choice to drain the women’s world of all vibrancy, color, and life is a strong one that fits the film’s themes. A substantial degree of control is placed on the camera’s movement as it sweeps across the fields or in the barn to capture each of the actresses’ faces. The film’s editing also keeps the pace moving once it settles into the meeting despite the opening being a bit clunky with introducing the colony and the characters (even with the help of voice-over narration which is used sporadically) and the beforementioned flashes of implied violence are all dramatically impactful without over-sensationalizing them. This is the difference when you have a woman directing the film. In contrast, most men would’ve focused more on this particular aspect. “Women Talking” proves that a film can be just as effective without showing any violence in graphic detail.

The story of “Women Talking” is not all gloom and doom, as Polley demonstrates hope for the future despite the past atrocities that came before. Still, it’s an emotional knockout featuring some of the best performances you will likely see this year. These characters may fight with one another, but they also support one another, and how Polley navigates through such an intense and thorough discussion while intersecting themes of faith, trauma, resilience, and sisterhood in her provocative screenplay is utterly masterful. “Women Talking” is a generational movie (as evidenced by the importance placed on the younger cast members too) that is ageless but more timely than ever, which is a sad and aching truth we all must confront so that we too might make a decision that could lead to a story that “will be different than ours.”

“Women Talking” will undoubtedly be an Oscar contender this year for Sarah Polley in Picture, Director, Adapted Screenplay and the entire cast should be up for awards. Right now, I’d say the most likely bets are Claire Foy and Jessie Buckley but the entire cast is truly remarkable and all of them are deserving. Watch out for nominations for Best Film Editing and Hildur Guðnadóttir’s original score, though the cinematography might divide some as I’m already starting to hear from others who saw the world premiere with me tonight. One thing is for sure, I’ll be hard pressed to find a better ensemble this year. I expect not only a SAG Ensemble nomination but a much deserved win.