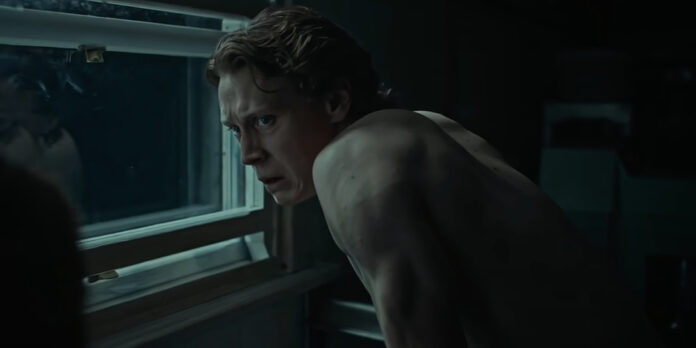 THE STORY – Believing he’s a wolf trapped in a man’s body, Jacob eats, sleeps and lives like one — much to the shock of his family. When he’s sent to a clinic, Jacob and his animal-bound peers are forced to undergo increasingly extreme forms of curative therapies. However, once he meets the mysterious Wildcat, their friendship blossoms into an undeniable infatuation, and Jacob must decide whether to renounce his true self for love.​

​​​One of the most remarkable experiences any piece of storytelling can offer is the opportunity to view a landscape that is slightly altered from the one that most are accustomed to seeing. Whether off on some strange distant world or peeking right around an unknown corner, having the chance to explore environments that are not immediately familiar can be a thrill. The purpose is not to simply judge such events and persons under the watchful gaze of some clinical microscope but rather to find a deeper understanding of a peculiar group and find the commonality that resonates on a deeper level. Such themes are at the heart of “Wolf,” a film that is bolstered by a commanding lead performance that fights against a flawed execution.

The story centers on Jacob (George MacKay), a young man who believes he’s not actually a human but a wolf. In an effort to cure himself of this kind of dysmorphia, he’s sent to a clinic that specializes in treating many individuals who also believe their proper form is some sort of animal. He’s under the watchful eye of the man who runs the facility, known only as the Zookeeper (Paddy Considine), and his cruel tactics have a strong reputation. While here, a budding romance develops between himself and Wildcat (Lily-Rose Depp), another lost soul with a traumatic past who exhibits animalistic tendencies of her own. Throughout it all, Jacob is on a journey to find inner peace with his own identity and rage against those who would seek to contain the beast within.

MacKay is an actor that has been making quite an impression in the relatively short time he’s been known to the general public (“1917“), and here he delivers an astoundingly compelling turn. He embodies this role with a fierce physicality that is mesmerizing to witness, particularly in how he contorts his body to imitate the movements of a wolf in a frighteningly realistic manner. At the same time, he also taps into the authentic emotional depth of this character and is able to convey the internalized conflict through much of his quiet stoicism. This is yet another example of the range MacKay can produce as an actor, and every moment he is on screen is a delightful discovery of more layered work. His piercing presence is intimidating yet inviting at the same time and is just more evidence as to what an exciting actor he has become and continues to exemplify.

Unfortunately, such laurels aren’t extended to the rest of the cast. MacKay has little chemistry with Depp, the latter unfortunately shackled with a shallow character with a romantic attachment that feels weak in its design. Considine is a great talent of his own, but he too struggles to flesh out a man who serves mainly as an archetype without much other substance. There really isn’t much the supporting players deliver that’s anything too memorable, save for Fionn O’Shea as a patient named Rufus who believes he is a German shepherd. There’s boisterous energy that masks a tortured and pathetic persona, and O’Shea realizes this in a way that is oddly endearing. He’s the only one who makes an impact in this serviceable ensemble.

Writer-director Nathalie Biancheri presents a stark portrait of a harsh world, crafted with steely compositions that evoke an off-kilter aura that puts one on the edges of reality. Given its premise and tone, the style evokes that of Yorgos Lanthimos’ “The Lobster,” though the deadpan humor it occasionally aspires to capture is elusive. Instead, the screenplay is littered with stale dialogue, flat characterizations, and an unending repetitiveness that grows tiresome very quickly. There is some inventiveness with the filmmaking, particularly in how the editing works to showcase the perspective of the animal state; however, the grueling pace weighs down most of those accomplishments. The commentary has a natural allegory of queerness as this band of outsiders chastised for unconventional lifestyles are forced through a type of conversion therapy. It’s an intriguing concept that lies on the surface without much meaningful exploration. Biancheri has a strong directorial eye, but the storytelling rings hollow.

“Wolf” does end up offering some fascinating ideas about isolation and identity, and that premise is carried wonderfully by George MacKay’s dedicated performance. It’s a shame that much of the film surrounding him is woefully underwhelming. The examination of this material never goes that deep beyond the most obvious of implications, and an underused cast only makes the disappointment feel harsher. One appreciates this attempt to find soulful meaning in a distinctive world different from our own yet similar in the shared anxieties and troubles. It’s a shame that the potential for an engaging narrative fails to convey such promise.