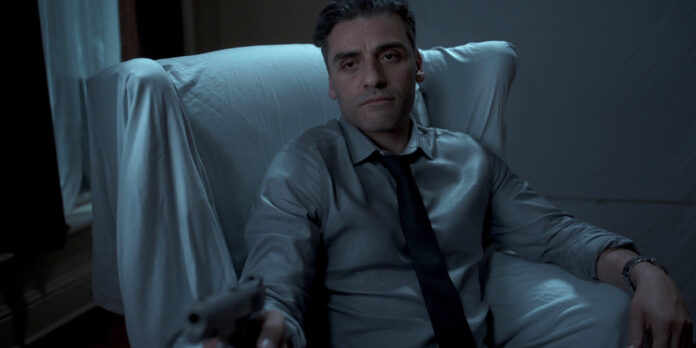 THE STORY – William Tell is an ex-military interrogator living under the radar as a low-stakes gambler. Tell’s meticulous life is thrown into disarray when he encounters Cirk, a young man looking to commit revenge against a mutual enemy. With backing from mysterious financier La Linda, Tell takes Cirk on the casino circuit to set him on a new path. However, he finds that the ghosts of the past will not release him so easily.

​Paul Schrader has built a career out of writing stories which, in his own words, “typically involve a man alone in a room wearing a mask, and the mask is his occupation.” Whether it be his breakout hit “Taxi Driver” or his first Oscar-nominated screenplay “First Reformed,” Schrader is fascinated by troubled men, dealing with existential forces beyond their control, tormenting them to no end, whether it be mentally, physically, or spiritually. His latest film, “The Card Counter,” is another penned character study focused on redeeming its lead character for past sins. It contains an intriguing setup, plunging us into the world of casino gambling just as deep as it dives into the depths of its protagonist’s soul. However, “The Card Counter’s” best parts feel too similar to “First Reformed,” which prevents it from being able to carve out its own unique identity out for itself, leaving it feeling weighed down by the burden of expectation and entangled by the distinct elements it does present.

William Tell (Oscar Isaac) is an ex-convict and former military interrogator who now spends his time counting cards (a skill he learned in prison) at various casinos across the country. He’s a low stake player, never allowing himself to get too greedy for his efforts, keeping his head low, and avoiding trouble at all turns. When he meets La Linda (Tiffany Haddish), a gambling agent whose job is to sign and bankroll players, and a young boy named Cirk (“Kirk with a C” played by Tye Sheridan) who has a tragic connection to Tell’s past, the three formulate an unusual surrogate family. Keeping a cool exterior to mask the pain and guilt of his past, Tell wants nothing more than to atone and seek redemption for not just the time he spent in prison but for something much darker. Is forgiveness possible? How does one know they’ve reached their limit?

“The Card Counter’s” introduction to its lead character and to its world is when Schrader’s throwback storytelling to a dying era of filmmaking is at its best. He visualizes the player vs. house advantage in poker for us, narrated by Tell’s voiceover. We watch as Tell methodically covers his ever-changing hotel room in white sheets and ties them off. We’re told that Tell sets modest goals for himself, sticking to a low profile. The casinos don’t even care if he wins, as long as he doesn’t win big enough to draw a lot of unnecessary attention. For him, counting cards is a way to pass the time, as he’s grappling internally with his past mistakes. His drug, his coping mechanism for his pain, is to win. All of these intriguing components are backed by Oscar Isaacs’s calm, stoic performance and the exciting score by Robert Levon Been, the lead singer and songwriter for the group Black Rebel Motorcycle Club. It’s a mysteriously dark and moody vibe that is cast over the first third of the film until other characters are introduced, and then all of this setup comes crashing down with little to no payoff.

While Oscar Isaac gives a haunting performance with dashes of warmth, he has little to zero chemistry with Tiffany Haddish. Shredding her usual comedic side to offer a still playful but more serious character than what we’re used to, Haddish does a decent enough job under the direction of Shrader. However, their attraction to one another is never believable. There is an unlikely family unit created between them and Tye Sheridan. But it lacks an organic quality that would’ve made their relationships more meaningful. Much screentime is devoted to establishing a connection between Cirk and Tell through Cirk’s deceased father, who, like Tell, served under Major John Gordo. Cirk blames Gordo for his father’s suicide, and Tell, a man already dead inside, doesn’t want revenge as much as he wants redemption. His kindness and affection towards Cirk are meant to serve as some kind of penance as he continues to work with La Linda, showing Cirk the ropes of the card counting world. However, Sheridan is miscast in a role that feels like it should’ve been played by someone more vulnerable and less masculine.

“The Card Counter” carries over many enriching pieces from Schrader’s last film, “First Reformed.” Many of them seemingly begin to work here again as the world of the Catholic church is replaced with the world of casino gambling, our guilt-ridden protagonist is substituted with another, both feature voiceover, a brooding atmosphere with lingering shots, and solid leading performance. However, once the secrets behind Tell start to unfold, so too does the fascination with the story. The pacing begins to drag out, the characters complicate the plot rather than enhance it, and the climactic payoff we’ve been building up to all of this time is wasted off-screen, leaving us just as empty and unfulfilled as Tell must feel by the end. There are a lot of weighty themes weaved throughout “The Card Counter” along with directorial flourishes (the distorted immersive virtual reality camerawork for Abu Ghraib prison flashbacks certainly stands out), and while not every choice made by Schrader fully works, it’s still a game worth playing – Just don’t expect to win in a scenario where losing and folding is more likely.