Which Best Actress Nominees Will Have A best picture Nomination? 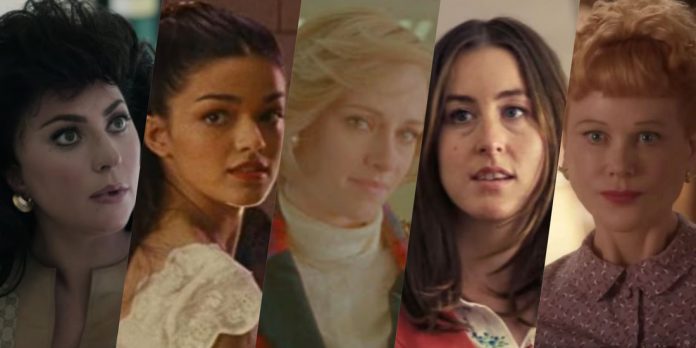 Thanks to the Golden Globes, Critics Choice Awards, and many regional critics groups, the consensus five favored nominees for Best Actress are Kristen Stewart for “Spencer,” Nicole Kidman for “Being the Ricardos,” Olivia Colman for “The Lost Daughter,” Lady Gaga for “House of Gucci” and Jessica Chastain for “The Eyes of Tammy Faye.” At the moment, the one thing they all have in common is that they are in films that have either no shot or are considered a long shot to get in for Best Picture.

For a time, Kidman looked like she could be the sole nominee from a Best Picture contender until “Being the Ricardos” got mixed reviews and no Best Picture spots from the Globes or Critics Choice. Colman is probably in the best-reviewed film among this group, yet “The Lost Daughter” is considered either too cold or too far down the Netflix pecking order to sneak into Best Picture. “House of Gucci” is probably still in the running as long as Gaga and Jared Leto are in line for nominations, but not even their runs or good box office headlines have helped spark a run yet. And Chastain’s “The Eyes of Tammy Faye” was hit with its own mixed reviews and much worse box office way back in September. Unless voters bailout “Being the Ricardos” or “House of Gucci,” prove they like “Spencer” more than early reports suggest, or bump “The Lost Daughter” above other Netflix bubble films like “Tick..tick…Boom!” and “Don’t Look Up,” there will be no Best Picture films represented in Best Actress if this is the final group of five. What’s more, the two leading candidates to break this group up are the only ones in the entire field who are from sure-fire Best Picture nominees, and both might still be longshots.

Alana Haim and Rachel Zegler are not only among the biggest newcomers this awards season; they are representing two Best Picture frontrunners in “Licorice Pizza” and “West Side Story.” One would think the momentum from those films alone, combined with the ingenue narratives for Haim and Zegler, could push one or even both of them in as token nominees from a Best Picture contender. Yet, as the Globes and Critics Choice have reinforced, along with a share of regional critic groups, voters seem committed to following a more traditional path. Despite being in movies that are barely praised beyond their own performances, Kidman, Gaga, and Chastain still fill the traditional big, broad, prosthetics-heavy biopic mold that Oscar voters almost never resist, especially if they’re played by A-listers, past nominees, and past winners. Stewart is a much less traditional kind of biopic performer. Still, she has been the overwhelming critics’ choice thus far, even if “Spencer” hasn’t benefited from it, while Colman is now on the run in her career where she can get in for just about anything. Between all of this, it would take some untraditional thinking for enough voters to tear away from this group of five to let the likes of Haim or Zegler knock one or two of them out. If they don’t have the traction or name recognition to do it, voters could go for past winners Jennifer Hudson, Frances McDormand, or recent LA critics champ Penelope Cruz instead. Yet none of them are likely from Best Picture nominees either, unless McDormand’s “The Tragedy of Macbeth” gets a late surge. At this stage, if neither Haim nor Zegler can break in, and if neither “Being the Ricardos” nor “House of Gucci” can slide into a very vulnerable Best Picture bubble, Best Actress 2021 will be a field unlike any in the preferential ballot era.

Since Best Picture expanded beyond five nominees, there have been five times where an acting field only had one member from a Best Picture film – Best Actress 2016 with Emma Stone from “La La Land,” Best Supporting Actress 2015 with Rachel McAdams from “Spotlight,” Best Actress 2014 with Felicity Jones from “The Theory of Everything,” Best Actress 2011 with Viola Davis from “The Help,” and Best Supporting Actor 2009 with Christoph Waltz from “Inglorious Basterds.” Yet from 2009 until now, there has been no acting field with every single nominee from a Best Picture snub. In Oscar history, this has happened only ten times before in the modern era – the majority of which were for Best Actress. However, the most recent example was from Best Actor in 2006, when Will Smith, Peter O’Toole, Ryan Gosling, Leonardo DiCaprio, and eventual winner Forest Whitaker were all from films outside the Best Picture group of five. Even then, DiCaprio also headlined the Best Picture winner that year in “The Departed,” although he was nominated for “Blood Diamond” instead. Other than that, the only acting categories in this century with no one from a Best Picture nominee were the 2003 and 2005 Best Actress fields. Charlize Theron dominated in 2003 for her transformation in the otherwise ignored “Monster,” while Reese Witherspoon won in 2005 after “Walk the Line” was probably one of the last films out for Best Picture. Before that, Best Actress was also devoid of Best Picture stars in 1994 when Jessica Lange won for “Blue Sky,” and in 1990 when Kathy Bates won for “Misery.” These circumstances only happened once in the 80s, when Kevin Kline won Best Supporting Actor in 1988 for “A Fish Called Wanda,” and once in the 70s when Best Supporting Actress went to Eileen Heckart in 1972 for “Butterflies Are Free.” Beyond that, the only other modern examples are all in Best Actress, in 1952 when Shirley Booth won for “Come Back, Little Sheba,” 1962 when Anne Bancroft won for “The Miracle Worker,” and again a year later when Patricia Neal won for “Hud.”

In this larger context, it is no wonder that Best Actress may once again have a field with no Best Picture contenders. There is a myriad of depressing reasons why Best Actress is most vulnerable to this circumstance, although expanding Best Picture has kept it from happening for a while all around. But now it is poised to happen again unless something changes pretty soon. Maybe today’s voters deserve more credit than the assumption that they’ll be too blinded by star power and makeup to turn away from Gaga, Kidman, and Chastain – though early voters and critics seem determined to stay focused on them so far. Maybe “West Side Story” and “Licorice Pizza” will prove big enough to get at least one young breakout in, just as Haim did at the Critics Choice and Zegler did by winning Best Actress from the National Board of Review. And maybe considering the lack of likely major nominations for “House of Gucci” and “The Eyes of Tammy Faye,” as well as limited space for “Being the Ricardos,” “Spencer,” and “The Lost Daughter” to sneak into Best Picture, there’s only so much these muddled films can do to not get in their own stars’ way. If they prove too much for voters to brush off, then maybe there is still hope for Best Actress to maintain some level of suspense and to avoid making dubious history. If it does make such history, it will only be unprecedented for this expanded era, though it is hardly anything new in the larger history of the Best Actress category.

Even if Haim, Zegler, or both get in, just getting that far will likely have to be enough for them. Even if one or both of them are the only nominee from a Best Picture contender, it likely won’t give them an extra edge to win over the bigger names from snubbed movies. After all, in the five acting fields from the expanded era where just one nominee was from a Best Picture film, only Stone and Waltz used that edge to win. Otherwise, McAdams lost to Alicia Vikander from the otherwise largely snubbed “The Danish Girl,” Jones lost to Julianne Moore for the otherwise wholly snubbed “Still Alice,’ and Davis infamously lost to Meryl Streep for the poorly reviewed “The Iron Lady.” In that context, even if either Kidman or Gaga’s film squeezes into the last Best Picture slot, it doesn’t automatically mean their stars will win. But however the nominations turn out, Best Actress will all but certainly have a majority of nominees who aren’t in Best Picture films, if not a unanimous set. By that measure, maybe it is all too fitting if the winner beats nothing but competitors from other snubbed movies – whether or not it is truly historic for this era.

​Who do you think will be nominated for Best Actress this year? Do you think their film will also receive a Best Picture nomination? Check out the NBP team’s current Oscar predictions here and let us know your thoughts in the comments section below or on our Twitter account.