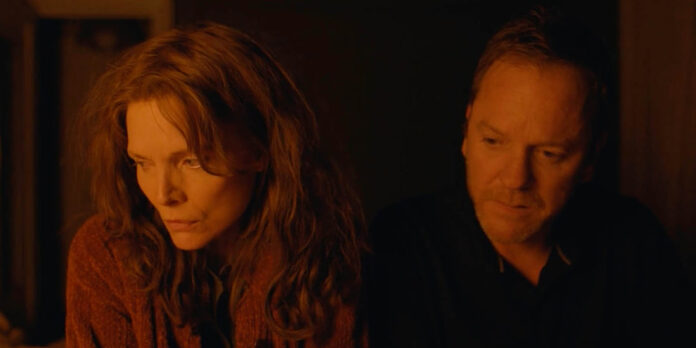 THE STORY – Unemployed and chronically anxious, Kyra is barely getting by. Kyra lives with and cares for her ailing mother, but the string holding her life together snaps when her mom passes away. Now, she must resort to desperate measures in order to pay the bills.​

​​Unemployment is a national epidemic in this country. Regardless of how low statistics and charts may show the unemployment rate as of 2018, millions of men and women face evictions and seized property due to their inability to find work. It would make anyone desperate. In Andrew Dosunmu’s “Where is Kyra?”, he analyzes this epidemic with a guttural magnifying glass. However, the problem with using a magnifying glass as a scrutinizing tool is that you often miss the big picture; instead, finding yourself mesmerized by details that, ultimately, add up to nothing.

Kyra (Michelle Pfeiffer) is the sole caretaker of her elderly mother. She bathes her, feeds her, and is tenderly devoted to ensuring her mother’s comfort. It’s a symbiotic relationship; divorced and unemployed for over two years, Kyra relies on her mother in equal measure to get by every day. When her mother passes away, Kyra’s already-fragile life crumbles. She is pushed into a corner of desperate measures to avoid homelessness while hiding the depth of her financial struggles from her new boyfriend Doug (Kiefer Sutherland).

The story is realistic and riveting; it’s a commonplace but painful situation many are thrust into every day. It’s definitely a topic to be explored and exposed, but when the right story is executed in the wrong way, it probably will be consigned to oblivion. This is the unfortunate fate of “Where is Kyra?”, whose 98-minute runtime is enveloped with a runaround sense of loss that has no beginning nor end in sight. Cinematographer Bradford Young (Of the critically acclaimed and beautifully shot films “Selma” & “Arrival”) and director Andrew Dosunmu utilize a filming style that — while at first is endearing and picturesque — becomes the bane of this film. The camera doesn’t move more than ten minutes of the film’s entirety. Instead, every long shot is straight and still, reminiscent of watching a scene filmed through a picture frame. While the intention of this style may be to provide viewers with a sense of intimacy and voyeurism while placing focus on the performances, it instead detracts from the story and becomes a painstaking distraction. It’s a pointed artistic choice that falls flat, but it may have worked had the picturesque scenes contained any source of thrill or adrenaline to keep the viewer’s interest. Instead, we’re left with shot after shot of mundane actions— putting on a pair of socks, looking in the mirror, brushing hair, sitting on a bed, walking off-camera, jumping rope, riding a bus. What’s meant as exposition becomes the plot; watching “Where is Kyra?” is like watching 98 minutes of a dozen different introductions and calling it art. Its attempt at connecting the dots fails, leaving us with a botched perspective of a desperate woman in need of a break.

It’s a shame because Michelle Pfeiffer is a roadhouse of realism as Kyra. She sinks her teeth into this role unapologetically, realizing that her character is both a victim and a victimizer. It’s a visceral experience watching Pfeiffer fumble and drown in her own helplessness and she’s imbued the film with a tangible sense of humility, like a wet dog begging to come inside. It’s an unembellished and humbling performance; every time Pfeiffer falls, literally or figuratively, your first instinct is to look away like you’re walking by someone homeless on the street. However, she’s stifled by Darci Picoult’s screenplay, which barely amounts to anything more than showcasing her precarious situation in different places. Whether it’s the bank, her home, a bar, or the occasional place of business where she’s dropping off a resume, it’s the same hopeless dialogue spun to fit a new surrounding. Pfeiffer does what she can with the bland words given to her, but it’s evident she’s struggling to breathe some sort of life into this film.

Her co-star, Kiefer Sutherland, tries to help Kyra’s cause as her new lover but falls short due to the film’s overall inadequacies. He ends up being nothing more than a witness to Kyra’s illegal, and outré, activities. In fact, it’s this outlandish criminality that holds the only source of captivation for viewers, yet it’s treated like a symptom of a fatal disease that should be anything but celebrated. What could’ve made an excellent dark comedy a la “The Dressmaker” or “The Lobster” ends up taking itself too seriously. “Where is Kyra?” is a cautionary tale gone terribly wrong, and you’ll find yourself breathing a sigh of relief when the camera, for once, moves with its actors, or if the conversation takes any kind of turn from its monotonous place of origin. Ultimately, the only interesting thing about “Where is Kyra?” is its title.