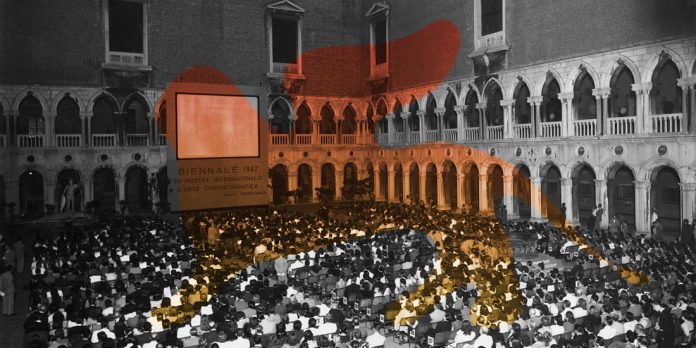 ​The world’s oldest film festival is set to return one week from today, from September 1st-11th. One of the “Big Three” film festivals, alongside the Cannes Film Festival and the Berlin International Film Festival, the Venice Film Festival is part of the Venice Biennale (a celebration of art set up by the Venice City Council way back in April 1893). While the festival did occur last year, with restrictions in place, this year, things are pretty much back to normal – Variety reporting that the festival’s artistic director Alberto Barbera feels confident that “the situation will be much less complicated than Cannes.” There are set to be free COVID tests on-site in different locations, but testing is not mandatory. This could be a sign that some normalcy is returning to the festival circuit. Bearing this in mind, it seems like a good time to revisit the past and explore the complex history of the Venice Film Festival. Beware, however, as the festival’s early days aren’t exactly pretty.

Founded in 1932, the Venice Film Festival’s origins are somewhat entwined with the fascist Italian government of the 1930s. The festival was created by Count Giuseppe Volpi, the sculptor Antonio Maraini (the festival’s secretary-general), and Luciano de Feo (head of the executive committee). Volpi was a wealthy businessman and an avid fascist who had been Benito Mussolini’s minister of finance. Volpi was responsible for bringing electricity to Venice and the northeast of Italy in 1903 and influenced the development of Porto Marghera, the industrial complex across the lagoon from Venice.

According to the festival’s own website, “Italy’s highest authorities gave their approval to what would rightly be considered the first international event of its type.” The first film being shown was Rouben Mamoulian’s “Dr. Jekyll and Mr. Hyde” on the night of August 6, 1932. A total of nine countries participated in the festival, which ended on August 21. Other films shown during the first installment of the festival included “Grand Hotel,” “It Happened One Night,” “Frankenstein,” and “The Champ.”

The festival was a huge hit, pulling in over 25,000 spectators. No awards were given at the first festival, but the audience voted to determine which films and performances were most worthy of praise and recognition. The French film “À Nous la Liberté” received the “Film Più Divertente” (the Funniest Film) award. “The Sin of Madelon Claudet” was chosen for the “Film Più Commovente” (the Most Moving Film) award, with the film’s leading actress Helen Hayes receiving an award for best actress. Most Original Film (Film dalla fantasia più originale) was awarded to “Dr. Jekyll and Mr. Hyde,” with its leading actor Fredric March being voted Best actor.

Despite the success of the first festival, it didn’t return until 1934. This time around, there was a more competitive element to the festival. The second installment of the festival saw the number of countries participating jump from nine to seventeen. This wasn’t the only dramatic change, as a prestigious award known as the Coppa Mussolini (Mussolini Cup) was introduced for Best Foreign Film and Best Italian Film. Other awards included the “Great Gold Medals of the National Fascist Association for Entertainment” to Best Actor and Actress (Probably something that today’s festival organizers desperately want to distance themselves from).

The festival had become so popular that in 1935 it became an annual event, and the Coppa Volpi (Volpi Cup) was created and awarded to the Best Actor and Actress. To this day, the award is still known as the Volpi Cup. After World War II, the festival organizers made the wise decision to have the Coppa Mussolini discontinued and replaced with the Leone d’Oro (Golden Lion), which would now be awarded to the Best Film.

The third installment of the festival in 1935 was headed by its first artistic director, Ottavio Croze, who maintained this position until World War II. The following year marked another critical development in the festival. A law drafted by the Ministry of Popular Culture made the festival an autonomous entity separate from the main Venice Biennale. However, this change allowed additional fascist organizations, such as the Department of Cinema and the Fascist National Federation of Entertainment Industries, to take control of the festival. In 1936, it also saw a jury added to the festival’s governing body, which was mostly made up of Italian jurors. The fascist propaganda film “Lo squadrone bianco” (“The White Squadron”) won the Mussolini Cup. The film’s plot follows a cavalry lieutenant who redeems himself by battling the “rebels'” of Tripolitania (modern Libya). The film plays down the use of gas warfare by the Italians and also tries to romanticize the European colonization of Africa.

By 1937, the festival had a new home at the Palazzo del Cinema, which was built on the Lido. The Palazzo has since been the site for every Venice Film Festival, except for three years from 1940 to 1942 when the festival was moved away from Venice for fear of bombing (although the city was, in fact, never bombed). In 1938, the festival held its first retrospective, devoted to French cinema, from 1891 to 1933. Actress Marlene Dietrich also came to the Lido as part of the celebration. “Snow White and the Seven Dwarfs” received a special award, which resulted in Volpi receiving a personal letter from Walt Disney in 1939 thanking him, as president of the Biennale, for the prize.

However, there was no shying away from the fascist ideology imbedded in the festival as Leni Riefenstahl’s “Olympia” became a joint winner for the Coppa Mussolini along with the Italian war film, “Luciano Serra, pilota,” directed by Goffredo Alessandrini. The celebration of fascism continued in 1939 when the Italian historical drama film “Abuna Messias” received the Coppa Mussolini. The film’s premise focuses on a cardinal attempting to convert the people of Ethiopia to Catholicism. Due to the strong fascist control over the festival, America decided to boycott this installment of the festival. Competition was looming as France was set to launch a film festival on the Riviera to rival Venice just one day after. However, it was canceled when Hitler invaded Poland.

Looking back on the festival during the 1940s is somewhat tricky. It’s hard to gloss over the grim truths of the festival’s origins and how the fascist ideology of the festival’s founders seeped into the decision-making for what films were awarded the biggest prizes. The eighth installment of the festival was held from September 1 to September 8, 1940, less than three months after Italy had belatedly entered the Second World War as Germany’s ally. Very few countries participated due to the war. In 1941, the Nazi German anti-Polish propaganda film titled “Heimkehr,” was awarded a special award by the Italian Ministry of Popular Culture. As war raged on, the festival stopped taking place from 1942 until it returned in 1946.

The year following the war’s end was a turning point for the festival. For the first time, the 1946 edition was held in the month of September, in accordance with an agreement with the newly reborn Cannes Film Festival, which had just held its first review in the spring of that year. The 1940s saw the exhibition of some of the greatest films of Italian neorealism and the return of international directors and stars to Venice. The installment of the festival in 1947 was dubbed the eighth, making the 1940 edition void, and took place in the magnificent Doge’s Palace and saw a record number of 90,000 visitors attending, firmly establishing the return of the Venice Film Festival. Finally, the festival could fully embrace the power and beauty of cinema and put its unsavory past behind it.