“WHEEL OF FORTUNE AND FANTASY” 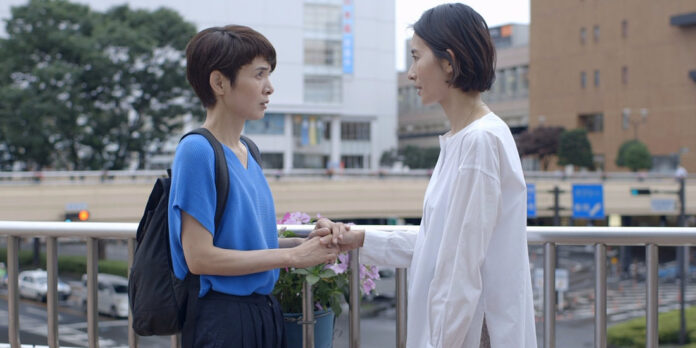 THE STORY – An unexpected love triangle, a failed seduction trap, and an encounter that results from a misunderstanding are the three episodes, told in three movements to depict three female characters and trace the trajectories between their choices and regrets.

​Writer-director Ryusuke Hamaguchi has been busy this year, with his film “Drive My Car” being one of the most talked-about films on the festival circuit. As it should be, it was nominated for the Palme d’Or and was the Best Screenplay winner at Cannes. The drama is Japan’s selection for its International Feature bid at the Oscars about a widowed actor/director receiving a new chauffeur. Still, it may come as a surprise to some that he has a Berlin awarded Silver Bear winner making the festival rounds, too. Different in story and structure, “Wheel of Fortune and Fantasy” is an anthology film that looks at three different stories, and what connects them is the strength of connection itself.

Many aren’t fortunate in love, but we will always have our fantasies. Hamaguchi looks at the cycle of love and heartbreak in three episodes. In episode one, “Magic (or something less assuring),” best friends Meiko (Kotone Furukawa) and Tsugumi (Hyunri) discuss vulnerability and the frightening prospects of love. Tsugumi explains with excitement her first date with a new guy and how she never thought she would click with someone like him so deeply. But this guy, Kazu (Ayumu Nakajima), coincidentally happens to be Meiko’s ex, and she’s still in love with him. In episode 2, “Door Wide Open,” a student is on the floor, begging his professor to help him. “He killed my future,” Sasaki (Shouma Kai) explains later on. Despite the film never giving a definitive reason for this statement, we can assume he’s being dramatic over bad grades. Flash forward months later, and he’s sleeping with an older student. Nao (Katsuki Mori) is married with a child but has a weakness for sex. Sasaki weaponizes this, asking her to help get revenge on his professor, Segawa (Kiyohiko Shibukawa), by setting a “honey trap”— record herself seducing Segawa and sell it to the media. In episode 3, “Once Again,” Moka (Fusako Urabe) is hoping to reconnect with an old flame and reignite the spark she regrets putting out. However, this reunion with Nana (Aoba Kawai) turns into a meeting of mistaken identity.

All three episodes have shades of the same themes; all include reflections on the past, and in the process, letting go. Another evocative theme is the power of words. In episode one, Tsugumi speaks of the deep conversations she shared with Kazu on their first date. As Meiko points out, it’s all very erotic. There’s an eroticism in words that penetrates much deeper than any physical touch ever could, for lack of better words. This is also seen in episode two as Nao uses the professor’s own words and reads his own sexual fantasy from his novel to attempt to seduce him. In episode three, Hamaguchi presents this theme in a more straightforward way, as it explains that the world had to go offline due to a virus, resulting in the return of letter mail – and what’s more intimate than a letter to your sweetheart? Magic doesn’t only live in the first episode of the same name, but within each piece as conversation forms unexpected connections between people.

“Wheel of Fortune and Fantasy” is very dialogue-heavy, but it may be some of the year’s best dialogue. Thanks to the script’s nuance, it’s so incredibly rewarding to listen to, as the intimate conversations between these characters touch on everything from the complexities of desire and temptation to the unpredictability of our impulses. It’s also a great exploration of womanhood from female characters written at different parts of their life. The film wouldn’t pass the Bechdel test – they talk to each other about men a lot – but the torments of the heart and soul are felt strongly with each performance.