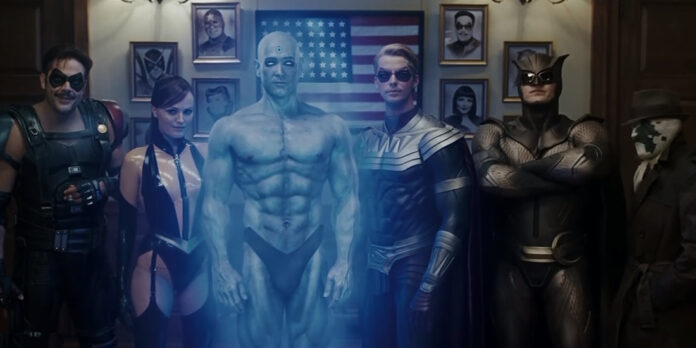 THE STORY – In an alternate 1985 America, costumed superheroes are part of everyday life. When one of his former comrades is murdered, masked vigilante Rorschach (Jackie Earle Haley) uncovers a plot to kill and discredit all past and present superheroes. As he reconnects with his retired associates, only one of which has true powers, Rorschach glimpses a far-reaching conspiracy involving their shared past and catastrophic consequences for the world’s future.

Zack Snyder is quite possibly the most divisive filmmaker working today. People either love him or hate him and recently people have been leaning toward the latter. But at one point in his career, Snyder seemed to be the next big name in blockbuster filmmaking. And despite a few hiccups “Watchmen” stands as possibly Snyder’s greatest directorial achievement. With a few misguided performances and a rocky story overall, “Watchmen” definitely has some flaws. However, Alan Moore’s story and characters are so rich, and Snyder’s ambition to adapt his unfilmable work is so great, that by default, “Watchmen” is considered Snyder’s magnum opus.

“Watchmen” is based on the graphic novel of the same name by Alan Moore and David Gibbons. In an alternate reality in 1985 superheroes are apart of everyday life in the United States. However, the citizens of the U.S. are fed up with these masked vigilantes, forcing a large number of these heroes into retirement. A specific group of popular heroes in this time period are simply known as The Watchmen. The Watchmen is made up of Silk Spectre 2 (Malin Ackerman), Dr. Manhattan (Billy Crudup), Ozymandias (Matthew Goode), Rorschach (Jackie Earle Haley), The Comedian (Jeffrey Dean Morgan), and Nite Owl (Patrick Wilson).

When The Comedian is murdered in his apartment building, Rorschach believes that someone is attempting to hunt down former masked heroes. He takes it upon himself to investigate the murder and tries to decipher who might have murdered The Comedian. The story penned by David Hayter and Alex Tse is mainly told through the eyes, or the mask rather, of Rorschach. He is the emotional core of the film, the one with all the questions and also the one with all the answers. Rorschach is the one who seemingly has the most to fight for while also being the one with the most to lose, making him not only an interesting character on film but a representation for all the emotion the film is meant to represent. He does not have a personal life outside of being Rorschach. Being a vigilante is what defines him. Without that, he has no purpose. The film bounces around between a couple of different stories involving the members of The Watchmen. Yet we always come back to the questions being asked by Rorschach. Questions like “Who’s behind it all?” “What did they do to deserve it?” and “Why has the attitude of the citizens shifted?”

Personally, I am a massive fan of this film. Upon my initial viewing, I had perceived the film as a downright masterpiece. However, after repeat viewings some of the flaws begin to rear their ugly face, making it not the glorious viewing experience I once had back in 2009. The film is definitely more positive than negative but there are some flaws that lessen the integrity of the film. The first and most notable aspect of the film that does not hold up as well is the screenplay. A good portion of the screenplay is pure exposition. “Watchmen” is one of the few films you could show someone that would prove how to write a screenplay and how to not write a screenplay.

The dialogue becomes a bit silly in its attempt to be poetic and insightful. A lot of this comes down to the delivery by the actors which I’ll get to in a moment. Exchanges between characters start to be utilized more as an opportunity to discuss previous affairs between one another, instead of trying to further the plot or their character arch, they have discussions about what people did in the past and how that has affected them. The only character who looks into what is actually unfolding on screen is Rorschach. And even then he is just repeating what we’re already being shown visually. The film mainly just starts being redundant in the information it is delivering for the first hour or so. For example, two characters will discuss an event that once happened in the past. Something gruesome like The Comedian’s attempt to rape Silk Spectre or The Watchmen’s involvement in the Vietnam War. Then after two characters have a small dialogue scene about said terrible incident, there will be some sort of flashback to highlight the event. We’re not only being told everything that is happening or happened but we are also being shown. It almost becomes frustrating after the third or fourth flashback. It’s almost though as if Snyder doesn’t know whether to show or tell, so he ultimately chooses both and the experience, while being faithful to the original graphic novel, does not translate well to film, especially when you’re film is battling a near three-hour running time.

As you can imagine, trying to sift through all the repetition is quite difficult at times. But if you manage to move through the constant flashbacks and present-day events, the story gets quite interesting at times due to the questions and ideas being presented. Underneath all of the exposition and backstory, the film is essentially a simple detective story. Underneath all of the politics behind allowing superheroes to be apart of everyday life in America, there is a simple story about Rorschach trying to solve the Comedian’s murder. But sadly a lot of different side stories get thrown into the mix. The love story between Dr. Manhattan and Silk Spectre 2 that ends after Dr. Manhattan simultaneously has sex with Spectre and conducts research on his work? This love story then evolves into an entirely separate love story between Spectre and Nite Owl after Spectre leaves Dr. Manhattan. It’s confusing, tonally jarring and features a terrible performance from Malin Ackerman that much like Sophia Coppola in “The Godfather Part 3” nearly derails the entire film. There are a lot of different side stories being told that do not make a ton of sense and are also not told cohesively. Rorschach and his investigating of Comedian’s murder is easily the most intriguing aspect of the film, yet it seems to come second to all of the other subplots.

Underneath all of the muddled storytelling, the film is quite an achievement in some other realms. For starters, it is a visual spectacle unlike any other. Cinematographer Larry Fong immaculately recreates illustrations done by Gibbons and Moore, transferring flawlessly onto the format of film. Deciding to utilize non-traditional superhero colors like red and blue but going for more secondary colors like yellow and purple, the film wears its grittiness like a badge of honor, proving to be more the anthesis of superhero movies instead of indulging in the typical tropes of the genre, visually that is. On top of its stunning cinematography, the film is practically a showcase of Snyder’s editing style. Utilizing the speeding up and slowing down that he started in “300,” the film is riveting in its use of action. Whether it be the small alleyway fights with simple thugs or the bigger, more story-oriented fights like Comedians murder, if there is one thing that Snyder knows how to do, its orchestrate action. While his stories may get lost in the shuffle his action never will (“Batman V Superman: Dawn of Justice” being the exception). When it comes to mixing the cinematography and editing into a moment of brilliance, look no further than the opening credits sequence of “Watchmen” set to Bob Dylan’s “The Times They Are A-Changin’.” And while that musical sequence in the film receives its fair share of praise, there are quite a number of other musical sequences that due to their song choices, feel distracting and don’t totally fit (Remember Owl sex set to “Hallelujah”?).

Now while this film may seem to have one really good aspect contrasting with one really bad aspect there is one portion of the film that falls in the middle of the spectrum, the acting. There are some performances in the film that are quite stellar and some that are actually a little ridiculous. The all-star of the film is obviously Jackie Earle Haley. Since Haley is the emotional center of the film he gets the most opportunity to shine as a character. We get a full exploration of his psyche more than anyone else’s, giving us a much more special bond with him. There are other performances that shine pretty bright like Billy Crudup’s as Dr. Manhattan. Then there are some that land as just simplistic like Patrick Wilson who feels slightly miscast here. But then there are some truly ridiculous performances like Matthew Goode as the cocky and arrogant Ozymandias and the before mentioned Malin Ackerman. However, the performance that takes the cake for the most absurd performance is Robert Wisden as President Nixon. Everything from the piss-poor makeup job on Wisden, to his silly little dialogue deliveries trying to do his best Nixon impersonation, the character of alternate reality Richard Nixon goes beyond ludicrous and just simply becomes nonsensical.

“Watchmen” is a film that does not hold up incredibly well with time, but still manages to be quite the feat for Zack Snyder on a technical level and shows just how truly ambitious a filmmaker he can be. From the marvelous visuals that faithfully adapt Moore and Gibbons world, to the engaging story about justice, humanity’s capacity for both good and evil and sticking superheroes into an alternate historical reality where they are outlaws, “Watchmen” still has its merits. Despite its storytelling hiccups and mismanaged plot progression, the detective story headed up by Rorschach is quite intriguing. “Watchmen” is quite possibly the most polarizing superhero film to date which is almost poetic, considering Zack Snyder is probably the most polarizing director working today. We may know who watches the Watchmen but in this day and age with so many resources at his disposal, who watches the director?