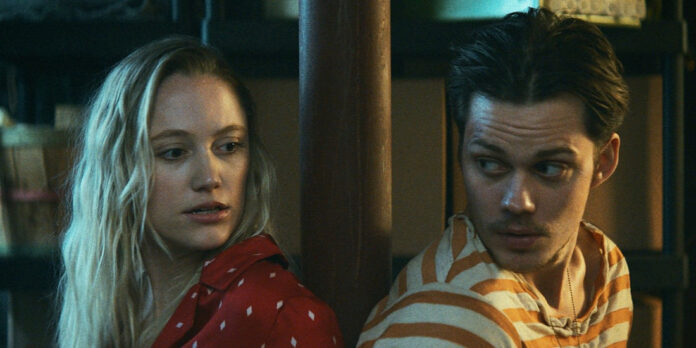 THE STORY – Mickey and Jules are lovers on the run, headed southbound for a fresh start in the Sunshine State. When their car dies after a gas station robbery, they break into a nearby house looking for a new set of wheels. What they find instead is a dark secret, and a sweet-as-pie pair of homeowners who will do anything to keep it from getting out.

​​​​​​​​From the very getgo, Dan Berk and Robert Olsen “Villains” is completely off-the-wall, and that’s what makes it so enjoyable to watch. This is a film which is so hard to describe, it similar in tone to say “Thoroughbreds” or “Assassination Nation,” being a darkly humorous and unapologetically violent affair. However, to compare “Villains” to anything else is to do it an injustice as it’s quite unlike anything you have seen before. Berk and Olsen push the envelope with “Villains” and have created a cult classic that will only get better on repeated viewings. With energetic performances from its main cast, lines upon lines of quotable dialogue, and some genuine laugh-out-loud moments, this is a film which starts off full of gleeful debauchery and keeps up the momentum all the way to the very end.

We open with a robbery taking place, two young lovers (who could have stepped from the pages of a Quentin Tarantino film) have donned rubber animal masks and are holding up a gas station. The young man wearing a pigeon mask is Mickey (Bill Skarsgård) and his girlfriend in the unicorn mask is Jules (Maika Monroe). They’re hardly ‘Bonnie and Clyde’ but they’re doing their best to get enough money to move to Florida, where their dream job would be to sell shells by the seashore. The pair of them are a couple of millennials stuck in an endless Peter Pan phase that they’ll never grow out of.

Mickey and Jules are so inept at playing outlaws that they run out of gas, the irony of just robbing a gas station isn’t lost on Mickey. They come across a house which seems abandoned, and through the garage window, they spot a car. Jackpot! During their hunt for the car keys, the to venture into the basement only to discover a young girl (Blake Baumgartner) chained up. Mickey and Jules may be criminals but they’re not heartless. However, before they get a chance to rescue the little girl, her ‘parents’ return in the form of George (a devilishly good Jeffrey Donovan) and Gloria (Kyra Sedgwick) who are the real villains of the film. Suddenly, Mickey and Jules find themselves in a very twisted, and darkly amusing game of cat-and-mouse where each couple is fighting to the death.

What makes “Villains” so entertaining is its performances from its four main players. Jeffrey Donovan is perhaps known for his more serious roles in films such as “Changeling,” “Sicario” and more recently, “Extremely Wicked, Shockingly Evil and Vile,” however in “Villains” he shows his true capabilities as the charming, and softly spoken George who is ripping in Southern Hospitality. George is perhaps 2019’s most twisted baddie that he makes Skarsgård’s Pennywise looks like a right clown. Kyra Sedgwick is a perfect pairing with Donovan and her Gloria is both monstrous and sympathetic at the same time, her motive is simply to have a child but her desire to play “Lucy Ricardo” has pushed her over the edge of sanity. Even though George and Gloria are completely, and utterly nuts, the viewer can’t help but root for them to get away with their kidnapping. In the film’s tensest scene, a nearby police officer (Danny Johnson) comes snooping around and it’s like watching a scene from the world’s most demented sitcom.

Like Donovan and Sedgwick, Skarsgård and Monroe also perfectly compliment each other. We fully buy into their character’s relationship, and while they’re hardly the ‘good guys’, they are such fully-rounded, and three-dimensional characters that we remain invested in their struggle to escape the house of horrors.

Towards the end, the film and the characters become slightly more serious, but the shift in tone is so cleverly executed that it doesn’t feel jarring but a natural flow from one genre into another. This is a testament to Dan Berk and Robert Olsen’s writing, and it is apparent that these two love their horror films and know their stuff. The script for “Villains” was featured on the 2016 Black List, so it’s fantastic to see the film make its way to the big screen. The film’s writing is also complimented with Matt Mitchell’s cinematography which captures the claustrophobic environment of George’s and Gloria’s house. It is also worth mentioning Annie Simeone’s wonderfully quirky production design, and Simeone manages to create a snapshot of a house stuck in the past which beautifully compliments the costume designed Stacey Berman, who manages to showcase the conflicting morals and values of two clashing generations.

Overall, “Villains” is a whole lotta fun. Wild, and exuberantly amusing, the only upset that can be had with “Villains” is that the film whizzes along so quickly that it’s a real shame when the ride is over. Stick around for the end credits as Matt Reynolds’ animation is an added bonus. And if you’re after a good film for Halloween this year, then“Villains” will tick all the right boxes.