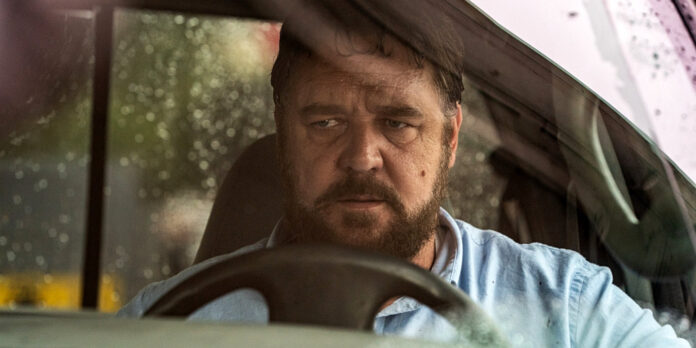 THE STORY – A mother leans on her horn at the wrong time, to the wrong guy. Road rage doesn’t begin to describe what he’s about to do to her and everyone she knows.
​
THE CAST – Russell Crowe, Caren Pistorius, Gabriel Bateman, Jimmi Simpson & Austin P. McKenzie​

​Russell Crowe. Oh, Russell Crowe. Once a Hollywood A-lister of respectable prestige films that could garner Academy Awards such as “Gladiator,” “A Beautiful Mind” and “Cinderella Man” has now been regulated to B list movie star status it seems in 2020 with the release of “Unhinged.” His recent supporting turns in “Boy Erased” and “The True History Of The Kelly Gang” suggests that his best days as a leading man are behind him. If he is going to lead a film, it would be something like “Unhinged,” a deeply problematic film with a simple premise that delivers on B-level movie thrills but nothing more.

Rachel (Caren Pistorius) is a divorced mother who is driving with her son on the road and running late to work. She is about to experience the worst day of her life as she has an altercation with a total stranger named Tom Cooper (Russell Crowe) in his own vehicle. Rachel is stressed after having been fired from her job. Tom Cooper is also experiencing his own problems on this particular day. When the two cross paths, Tom takes issue with Rachel’s attitude towards him for a simple horn honk, which pushes him to take his anger and frustrations out on her in the most obsessive and horrific manner possible.

Asking what happened to Russell Crowe is pointless now. We know his bad reputation in Hollywood through bursts of anger which resemble the character he’s playing here and the evidence is there to suggest that it has hurt his career. While audiences will take pleasure in seeing a name they recognize in a simple thriller and Crowe certainly delivers what’s expected of him, “Unhinged” flies off the road in its attempt to provide relevant social commentary, as it introduces questionable and sometimes downright preposterous logic to its story. This would’ve served better as a short film but instead, it’s stretched to 90 minutes of male aggression and violence on women, minors, and anyone else that stands in Crowe’s way.

Director Derrick Borte and screenwriter Carl Ellsworth want to present a film that gives a face to those suffering from daily stress, or “the Mondays,” as is stated in the film’s opening credits which uses real-life footage of violence on roads and in the streets to showcase how on the brink we are as a society of just exploding at any minute. To believe though that such violent tendencies would extend to the measures which Tom Cooper goes to in his violent warpath (all stemming from his wife cheating on him) is a bit much to swallow and take seriously. Had the movie been entirely set on the road within the character’s vehicles, a tense and relatable short film could’ve been developed. But once Tom gets a hold of Rachel’s cellphone and starts terrorizing her through harming members of her family, the film’s premise becomes too unbelievable and thus, the relatability disappears.

“You’re about to know what a bad day feels like,” Tom warns Rachel early on. Well, a bad day for me felt like watching “Unhinged.” Even in a deprived year of decent cinema, I still could not bring myself to rate this movie highly even if it delivered on some satisfying action (there are more than a few genuinely impressive car stunts) and a final kill that had me grinning due to its 1980s inspired cheesiness. Stalking, murder, car crashes, and more all transpire as Tom’s personal vendetta against Rachel intensifies, but for what? Why? Is Tom’s anger justified? Absolutely not. So why is the film’s thesis on road rage and outward expressions of violent aggression so unbalanced? Maybe I shouldn’t be asking such questions and I should just shut up and enjoy the ride. Excuse me if I honk too loudly.