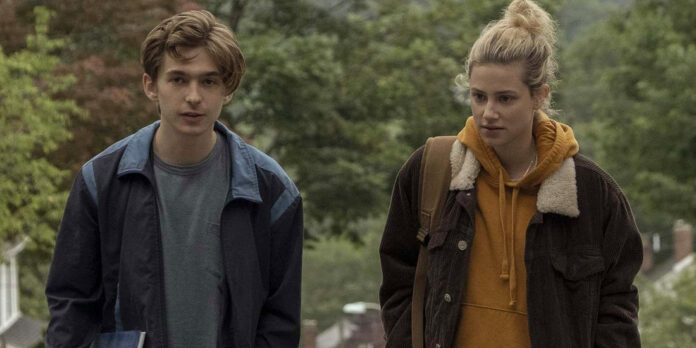 THE STORY – A high school senior falls in love with a new transfer student who hides a heartbreaking secret.

8/19/2020
​By Nicole Ackman
​
​“Nothing worth writing about had ever happened to me,” the main character, Henry (Austin Abrams), says at the beginning of Richard Tanne’s “Chemical Hearts”. That quickly changes after he meets the enigmatic Grace (Lili Reinhart) who transferred from another high school following a car accident the year prior that left her with a knee injury. This adaptation of the novel by Krystal Sutherland does a good job of portraying the modern high school experience, but it fails to keep the audience engaged throughout and seems to hold them at arm’s length from the characters.

Henry and Grace meet when they’re offered to be co-editors of the school magazine. Henry accepts because it’s been his dream for years, but Grace refuses; however, later she agrees to be the assistant editor. Grace is prickly and secretive and Henry is fascinated by her. His obsession with her at times makes it feel like the film might veer into manic pixie dream girl territory, but it refrains from making her a total cliché. Although she does get to say the overdone line, “Stop trying to fix me.”

As Henry gets to know Grace better, we begin to see more of her quirks, like her habit of feeding the fish in an old cotton mill that had once been a factory. At times it feels like the narrative is floundering, partially because the audience also struggles to get to know Grace, and she isn’t as intriguing as Henry thinks she is. There are a handful of interesting technical decisions like how the camera tilts off its axis in a pivotal scene that shifts the dynamic between them.

The main character, Henry, is astoundingly average. He’s an aspiring writer who enjoys putting broken pottery back together and has two close friends. He’s never had a girlfriend before and definitely isn’t cool, but I appreciated that his lack of popularity didn’t have anything to do with the narrative. Too many movies set in high school revolve around trying to fit in with the “cool” kids. Abrams does a good job of seeming both genuine and awkward, and remarkably, like a real high school student. However, the character is so bland that he struggles to carry the movie.

The film features a fairly realistic portrayal of the modern high school experience, aside from the melodrama of the plot. Henry and Grace attend an unremarkable-looking school where the school newspaper seems a bit over-important, but the opening monologue sets the tone that in high school everything feels more important than it is. The film does a good job of blending in modern technology, like Henry looking Grace up on Instagram and finding a news article about her car accident online.

The most interesting subplot in the film revolves around Henry’s best friend, La (Kara Young). While the film relegating the queer Black best friend character to a small part isn’t great, her relationship with another classmate Cora (Coral Peña) is. I really appreciated the scene in which Cora discusses her confusion about her sexuality as I’ve rarely seen that discussed in films, especially ones targeted towards teens. However, I couldn’t help but wish that La and Cora were the focus of the film rather than Henry and Grace.

When Grace says, “The teenage years are limbo,” she’s definitely correct. The film is more complicated than I expected, and it makes an effort to delve into the confusion and loneliness of being a teenager. However, in trying to make a profound statement, it seems to struggle with its tone and its characters. It lacks the charm of Netflix teen rom-com offerings like “The Half of It” or “To All the Boys I’ve Loved Before.” “Chemical Hearts” makes a commendable effort to address the teen years in a nuanced way, but ultimately fails to engage.