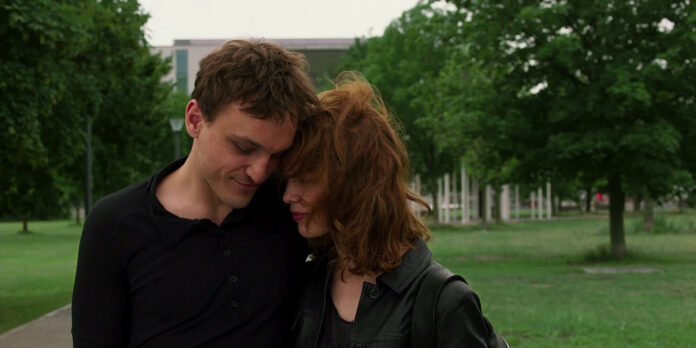 THE STORY – Undine works as a historian lecturing on Berlin’s urban development. But when the man she loves leaves her, the ancient myth catches up with her. Undine has to kill the man who betrays her and return to the water.
​
THE CAST – Paula Beer, Franz Rogowski, Maryam Zaree & Jacob Matschenz
​
THE TEAM – Christian Petzold (Director/Writer)

Sometimes, some films sound better on paper and when they manifest into a real film they become a crushing disappointment. This is the overall feeling that one has to Christian Petzold’s latest film, “Undine.” A film that sounds intriguing and full of potential, but, in reality, it lacks any depth. You may be familiar with Petzold’s previous film “Transit,” an adaptation of  Anna Seghers’s 1944 novel about a refugee who impersonates a dead writer in order to escape a fascist state. Petzold approached the material differently and set the film in the present day. On paper, that idea sounded like it wouldn’t work, but in execution, he somehow managed to make all the pieces fit together. Perhaps the fault lies in the fact that it was Petzold who came up with the story and wrote the screenplay. It could also be said that after the impact of “Transit” our expectations were just too high. Whatever the reason may be, the fact of the matter is that “Undine” fails to make much of a splash.

The film opens with a tense breakup scene between a couple. The woman is Undine (played by the wonderfully enigmatic Paula Beer), her unusual name stems from a German fairytale by Friedrich de la Motte Fouqué in which Undine, a water spirit, falls in love with a knight in order to gain a human soul. The man sitting across from her is Johannes (Jacob Matschenz) and he’s the one who is trying to end their romance. Instantly, there’s something off about Undine. There’s a violent side to her, if Johannes breaks up with her then she will have no other choice but to kill him. It’s not an empty threat as there’s a sense of veracity to her tone. She begs him to stay at the cafe and wait for her to finish work. For a split second, we assume he will follow her instructions. Alas, this isn’t the case. She returns after delivering a lecture to discover Johannes has split. Can you blame him?

Undine doesn’t remain single for long. While searching the cafe for Johannes, she meets Christoph (Franz Rogowski), an underwater diver who has just heard her lecture. Their meet-cute is interrupted by a large fish tank breaking, showering them with water. Instantly, Christoph seems smitten by this unusual woman. They soon begin a passionate and intense relationship but, will Undine’s past come back to haunt them?

There are some compelling aspects to this film that keep the viewer enthralled for the most part. Firstly, the performances by Beer and Rogowski are remarkable. Beer has an otherworldly look to her, her big hazel-green eyes have a hypnotic pull which instantly draws us in. Even if the story lacks any real oomph, Beer manages to explode and dazzle on-screen. Rogowski is wonderfully sweet and charming that you can’t help but find him adorable. Both actors appeared in Petzold’s previous film and they seem to have this natural chemistry to them which helps lift the material.

In terms of cinematography, the film is handsomely captured by Hans Fromm, especially the underwater shots. However, upon reflection, there aren’t any memorable shots or sequences that stand out as particularly impressive. Production design and costume wise, everything feels just a little bland. The film feels poorly paced, with a second act that drags on for too long and an epilogue that is tacked on almost as an afterthought. Aside from the acting, there really isn’t anything that stands out as being noteworthy. And, as a result, it’s left to the actors to try and hold this whimsy film together.

Tonally, “Undine” feels like there’s something far more sinister lurking under the surface. The music abruptly ends and sound becomes muffled as implying that something violent is about to erupt. We wait eagerly in anticipation but when the inevitable occurs, it feels anticlimactic and rushed. Petzold seems too preoccupied with setting up the romance between Undine and Christoph and while both actors deliver wonderful performances, there really isn’t that spark there. Their love-scenes feel very watered down lacking any intensity or passion. We can understand why Christoph is drawn to the mysterious Undine, but what is it about him that drives her so crazy? As their relationship unfolds, Petzold hints at the possibility that Christoph is helping Undine become more ‘human’ but everything is implied or suggested and nothing is firmly explained. Instead, we as the viewer are left to come to our own conclusions, which makes “Undine” such a frustrating watch.

There are a few scenes in which Undine delivers talks about the complex history of Berlin (the city where predominantly most of the story takes place) and while this is fascinating to listen to, after a while it becomes tiresome. It feels slightly out of place when we consider the fact that Undine might be hiding a big secret. Why does she care about the history of this metropolis? Rather than answer any of the viewer’s questions, Petzold keeps piling us with more and more questions. The end result is a puzzling mess of a film that reminds me of a swan swimming; on the surface, it looks calm and collective, but it’s a thrashing chaotic mess underneath the water.