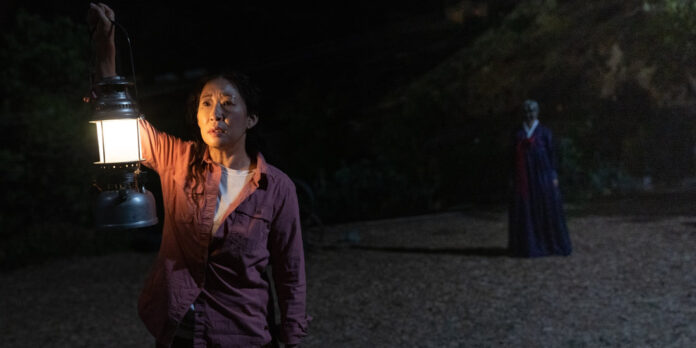 THE STORY – A Korean immigrant, Amanda, and her daughter Chris live on a rural farm, raising bees and living without modern technology. When Amanda receives the cremated ashes of her deceased estranged mother, it unleashes a vicious spirit intent on taking her body for itself.
​
THE CAST – Sandra Oh, Fivel Stewart, Dermot Mulroney, Odeya Rush, MeeWha Alana Lee & Tom Yi

​”Umma” (meaning “mother” in Korean) marks Iris K. Shim’s feature directorial debut after having previously worked on documentaries and shorts. The film stars Golden Globe-winning “Killing Eve” star Sandra Oh and attempts to tackle traditional Eastern themes of familial dependence but through the lens of the horror genre. Filled with nightmarish imagery steeped in South Korean culture and drenched in a foreboding atmosphere, “Umma” had all the makings to be a unique entry in the horror genre but unfortunately falls flat due to a myriad of issues that mainly stem from Shim’s writing and directing.

Amanda (Sandra Oh) is a Korean single mother who lives a secluded life on a honeybee farm with no one but her teenage daughter Chrissy (Fivel Stewart). When Amanda receives word from her Uncle that her mother has recently passed away back home in South Korea, a place which Amanda has not visited for many years, it starts a downward spiral for her and her relationship with her daughter fueled by paranoia and dark secrets of the past. Driving a deeper wedge in their relationship, Chrissy has expressed interest in leaving her mother and attending college, which only pushes Amanda’s fears and anxieties of abandonment further. As the ashes of her mother start manifesting into a ghostly presence that haunts Amanda, she must confront her past to deal with the present to avoid becoming just like her mother.

Utilizing atmospheric sound effects and a brooding score to the max, Iris K. Shim’s film pushes its horror genre trappings, themes, and actors too hard on nearly every level. The dialogue feels forced, the performances come off as stilted, and the tone and themes are too apparent. The result is an overpowering, sometimes unintentionally hilarious horror film that is neither scary nor engaging. Even the film’s central mother-daughter relationship cannot be salvaged by the performances from Sandra Oh and Fivel Stewart due to the unspecific direction and on-the-nose writing, resulting in a lack of subtlety that would’ve surely been appreciated for such a personal story dealing with a different culture’s views on familial ties.

Because this is a horror film, there are plenty of jump scares to be found as Umma torments Amanda, and we don’t know if her visions are real or not. This allows for some brief moments of excitement which helps break up the film’s languid pacing (thankfully, the runtime is less than 90 minutes). Still, the film lacks a genuine emotional connection between it and the audience due to the wooden performances and over-reliance on its dark style. Some subtle CGI effects add to the heightened reality of the picture, but they’re overshadowed by the heavier use of them later on as the film progresses, and Amanda’s visions become worse, on top of the other detrimental elements mentioned before.

Devoid of any tension or mystery, Amanda has a condition where she cannot be around electricity, a condition which, if anyone has seen “Better Call Sul” before, you already know is all in her head, and instead, she’s repressing something deeper. Unfortunately, what is revealed in “Umma” is neither as thematically deep nor better than what we’ve seen before in other films exploring similar themes. Iris K. Shim wants to explore the notions around how Korean children are meant to take care of their parents in both life and death, which is a belief viewed oppositely here in the West where it’s the parent’s responsibility always to take care of their child and expect nothing in return. While this isn’t to say such an exploration has been overdone, it’s not effectively told here, given that it doesn’t provide any new information or examine it in a compelling way, thus making “Umma” a disappointment overall.