Top Favorite Film Scores Which Were Not Nominated For The Oscar 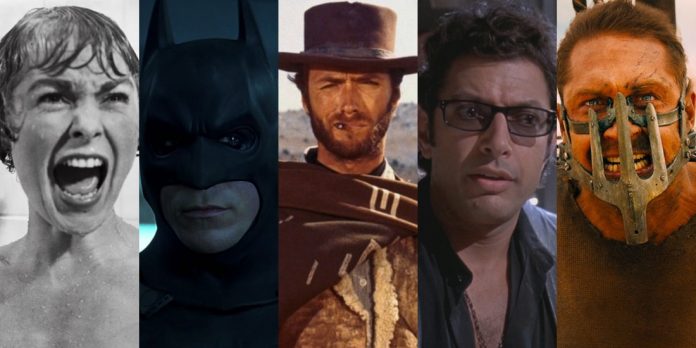 I am the last person who should be doing a list of top anything related to music. I struggle all the time with viewing music objectively and when asked to rank my Top 20 favorite film scores which were not nominated for an Oscar for Best Original Score, I panicked. How do I rank one over the other? What constitutes one being better than the other? Is it based on how many times I’ve listened to it? If so, then do I go by the combined number of plays per each track on the album? So many questions. No real answers. So, I thought it would be easier to place all 20 in a randomizer (And cheat with ties on top of that!) to give to you the film scores which I hold dear to my heart and I personally believe deserved more awards recognition from the Academy.

​Click below and feast your ears upon some cinematic musical greatness!

The first film score from Bernard Hermann changed the way we listen to horror music in a major way. “Psycho” was not the only film score where Bernard Hermann and Alfred Hitchock collaborated. They also gave us iconic scores for “North By Northwest,” “Vertigo” and “The Wrong Man.” However, “Psycho” remains their most famous and my own personal favorite.

The late great James Horner gave us some very incredible scores over the course of his career, from “Aliens,” to “Braveheart” and “Titanic.” However, it’s his work on “Glory” which stands out the most to me from his non-Oscar nominated film scores. The “Charging Fort Wagner” track (Above) remains one of the most goosebump inducing tracks I’ve ever heard.

Frequent Darren Aronofsky collaborator Clint Mansell has been an integral part in shaping the director’s career through the music he provided. Whether it is the haunting strings from “Requiem For A Dream,” the delicate piano of “Black Swan” or a combination of both for “The Fountain” this is my first cheat where I simply could not choose just one and had to praise all three. They each deserve even more of a spotlight when you consider that Clint Mansell has never been nominated for an Academy Award once in his entire career so far.

One of the most hummable and unforgettable themes of all time, this is not the only time that Hans Zimmer will show up here today. “True Romance” remains one of the composer’s highlights in his long and distinguished career, especially when you consider how much it stands out from the rest of his other film scores.

I mean, C’mon. It’s pretty well documented amongst the readers that “The Lord Of The Rings” is my favorite movie of all time, so naturally Howard Shore’s iconic and Academy Award winning score comes naturally with that. What remains such a mystery till this day is how/why Howard Shore’s music was overlooked for the second installment in the popular trilogy? Winning Academy Awards for “The Fellowship Of The Ring” and for “The Return Of The King,” it continues to amaze me that he was overlooked for his equally tremendous work here in “The Two Towers.”

Carter Burwell has created quite the career for himself, being a frequent Coen Bros collaborator (And now lately with Martin McDonagh as well) and I believe the two best representations of his work which the Academy looked over was his work on both “Fargo” and “True Grit.” With beautiful piano arrangements, flutes and other various instruments which help to give him his distinct sound, Carter Burwell long went without any Oscar nominations for his work until recently where he received his first two nominations for “Carol” and “Three Billboards Outside Ebbing, Missouri.” Should’ve been sooner.

Wow! What a stunning piece of work. How this and another film score from 1993 failed to get Oscar nominations is beyond me. Michael Nyman never topped his film scoring work here in Jane Campion’s devastatingly beautiful drama “The Piano.” The multi award winning composer crafted something so elegant and everlasting, it only makes sense that it would be worthy of a score for a film called “The Piano.” What doesn’t make sense is why it was ignored by the Academy.

The Academy only had room for one electronic score in 2010 (“The Social Network”) in their lineup but Daft Punk, with their first film score nonetheless, came roaring out of the gate with work that was bold, unique and brilliant. Electronic influenced music has truly become the norm now in cinema and maybe the Academy was not ready to take musicians such as Daft Punk seriously at the time. They have not made a single film score since and one has to wonder that as their work here rises in popularity, if they will eventually get their first nomination.

Speaking of “The Social Network,” Trent Reznor and Atticus Ross won an Oscar for their work on that film but then shockingly both times were overlooked for both of their follow-up collaborations with director David Fincher on both “The Girl With The Dragon Tattoo” and “Gone Girl.” They say that once you’re “in the club” with the music branch, then the nominations seem to follow. The opposite has been true of these two collaborators since then.

It actually makes me laugh that one of the most popular and beloved films cores of all time by the most Oscar nominated composer of all time did not receive an Oscar nomination. Now, I understand that it came out the same year as “Schindler’s List” and John Williams won the Oscar anyway for that film but if anything, his wondrous work on “Jurassic Park” which made us believe that dinosaurs were alive once again, should have gotten him yet another nomination.

Another one that is puzzling in why it was overlooked by the Academy. The epic and gorgeous work by Randy Edelman and Trevor Jones on “The Last Of The Mohicans” not only deserved an Oscar nomination but probably the win as well. What won the Oscar for 1992? “Aladdin.” A good film score but more celebrated for its songs than anything.

Oh what sweet irony. Vangelis followed up his Academy Award winning work on “Chariots Of Fire” with one of the most influential film scores ever produced in Ridley Scott’s “way ahead of its time” sci-fi film “Blade Runner.” Flash forward 35 years later and the creative team of Hans Zimmer and Benjamin Wallfisch came together to followup his work with “Blade Runner 2049” and despite heaps of praise for their electronically fused scores, each film’s work went unrecognized by the Academy.

One of my favorite films cores of the last few years in a film which I feel was widely misjudged for just how brilliant it truly is, “Swiss Army Man” is not a normal movie so it stands to reason that it would not have a normal film score either. With an emphasis on accapella, rhythmic tones and a propulsive energy that is unlike any other, the work here by Andy Hull and Robert McDowell is the kind that so rarely ever gets recognized for how unique it really is.

Ok now this is just ridiculous. “Argo,” “Anna Karenina” “Lincoln,” “Skyfall” and the eventual Oscar winner “Life Of Pi” were all nominated over this vast, gorgeous, detailed and cherished work by Tom Tykwer, Johnny Klimek and Reinhold Heil. And the Academy wee not the only ones. Critics Choice, BAFTA and even the Grammys failed to recognize this monumental piece of work. Shame on them all. The movie might be a mixed bag but this films core certainly was not.

And we’re back to Hans Zimmer again! His work on “Rush” and “Man Of Steel” are personal favorites of mine but his work on the first four “Pirates Of The Caribbean” films has only furthered his popularity and his legendary status amongst other living composers. Insanely catchy, recognizable, epic in scope and grand in its majesty, its downright shocking that he did not receive an Oscar nomination for any of these movies. Just nominate Hans Zimmer every other year….his work is always worthy!

Disqualified in 2008 for “reasons,” it took Johnny Greenwood a long time to finally receive his first Oscar nomination which he finally got this past year for Paul Thomas Anderson’s “Phantom Thread.” However, their first collaboration together remains one of their most popular and helped to elevate “There Will Be Blood” to instant “masterpiece” status amongst moviegoers. Had he been nominated, I’d venture to say he would have won.

Every track. Every note. Every moment of the soundscape created by Burkhard Dallwitz and Philip Glass for Peter Weir’s satirical film is just as beautiful and haunting as ever. Filled with dramatic moments, comedic moments, light moments and dark moments, the score for “The Truman Show” received a Golden Globe win but nothing more.

Hans Zimmer again! Only this time I’m pairing him up with Danny Elfman who is a composer that has never won an Oscar in his career but many, myself included, feel his moment was in 1989 for Tim Burton’s “Batman,” which features one of the most popular and widely acclaimed scores of all time. The Academy sadly passed him over as they also did Hans Zimmer (And James Newton Howard on “Batman Begins”) for Christopher Nolan’s “The Dark Knight” Trilogy. What does the Academy have against “Batman” music?

Ennio Morricone FINALLY got his first competitive Oscar win in 2015 for his work on Quentin Tarantino’s “The Hateful Eight.” However, his work on “The Good, The Bad And The Ugly” and a bunch of others have stood the test of time as some of the greatest music ever composed and even went on to influence filmmakers such as Quentin Tarantino who continued to use Morricone’s tracks in his filmography until he could directly work with the legendary composer.

And finally, we come to my favorite film of 2015: “Mad Max: Fury Road.” Antonius Tom Holkenborg (Otherwise known as “Junkie XL”) had previously worked on a few film scores before coming on board for George Miller’s action masterpiece but nothing before or since can compare to his adrenaline-fueled work here. Instantly recognizable, used in montage videos all over the world and some incredibly motivating music to exercise to, “Mad Max: Fury Road” received 10 Oscar nominations and won 6. One of those should have been for its score.

So what do you think? I know I left off many film score but I’m curious to know which film scores are some of your favorite that got overlooked by the Academy. Let me know in the comments below.