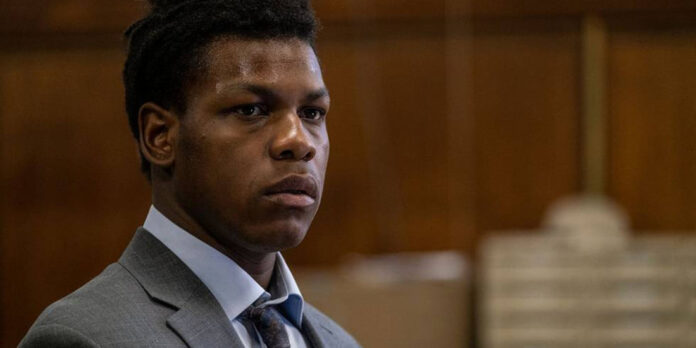 THE STORY – Casi is a promising young New York City public defender whose idealism is beginning to crack under the daily injustices of the very justice system he’s trying to make right. Doubting all he has worked for and seeing signs of the universe collapsing all around him, he is pulled into a dangerous, high-stakes drug heist by an unpredictable former client in an effort to beat the broken system at its own game.

​​​There’s been an enormous reckoning with the justice system in recent years, and “Naked Singularity” shows just some of the injustices that people may face for minor crimes. But, as the movie suggests, every so often, you might get a chance to kick the system and get the justice you’ve been waiting for.

Casi (John Boyega) is a young public defender in New York City who looks exhausted. He’s tired of his clients never getting a fair chance at moving on with their lives and feeling like the only one who cares about what happens to these folks. He often gets into heated conversations with Judge Cymbeline (Linda Lavin), which only worsens things. His snappy comments even earn him a six-month suspension, the last thing this star defender even could have imagined.

One of Casi’s former clients, Lea (Olivia Cooke), is also experiencing the wrath of the legal system. After a minor drug offense, she finds herself working at the NYPD tow pound, dealing with constant harassment from her boss, and feeling like she can’t escape because of her record. One day, Craig (Ed Skrein) enters her life, and she finds herself in the middle of a drug operation involving millions of dollars worth of heroin stashed inside one of the SUVs in the tow pound. After she’s caught with a sample of the heroin, Casi tells her to work with the police and double-cross Craig. Lea tells the police that the car will be bought at an auction and the drugs will be sold to “The Golem,” a Jewish crime syndicate in Brooklyn, but she doesn’t exactly give them all the correct details. She sees the heist money as her way out of her current life situation, and she’s not going to give it up readily.

When Casi realizes that Lea is lying to the police, he consults with his friend and fellow public defender, Dane (Bill Skarsgård), who suggests maybe they, too, should get involved in the heist and take the money for themselves. It’s a crazy plan, but it also could be Casi’s ticket to fixing the obstacles he sees in his life as well.

The film feels a little confusing initially as it’s trying to set itself up, mainly because we don’t learn a lot about our main characters, and scenes move so swiftly. Once we lead up to the heist, the fun picks up ever so slightly. It all starts with the auction of the SUV at the tow pound, as Craig and another buyer battle it out. In the meantime, Casi and Dane are both trying to get their plan in motion at the tow pound without getting caught, which doesn’t go as planned. But even as there are mishaps for all people involved, there’s surprisingly little tension in these moments, and problems get resolved expeditiously. The plans sounded easy from the beginning, and sure enough, they were executed relatively quickly, which doesn’t make for the most exciting movie.

There are some other moments and choices that feel a bit awkward. Casi shares that his mother was deported to Columbia, but there’s no attempt to bring that up ever again. He’s also seeing and experiencing some strange sensations. It’s all trying to show him reaching his breaking point, but without these visual clues, we really wouldn’t notice. He seems frustrated with work, but nothing else suggests that he’s going through a challenging mental health period. This movie has a great length at 93 minutes, but obviously, the script and characters weren’t as developed as they could have been. If there were just a few more scenes where Casi dived deeper into his struggles, it would have helped make this film stronger.

Since characters aren’t written very well, you don’t find yourself necessarily cheering for any person. But there are some great performances in this. Boyega handles the lead role with such ease, trying to keep those strange sensations under control while also doing the imaginable and going against all of his principles as a lawyer when he gets involved in the heist. With her distinct New York accent and “if looks could kill” glances, Cooke delivers the film’s strongest performance. Skrein is scary good playing the villain, while Skarsgård has the most fun as an uncharacteristically funny, wacky, coked-out public defender.

“Naked Singularity” banks a lot on the heist, but not everything comes together in the end. Things feel too rushed throughout the film, and events get wrapped up too easily by the end. There’s also little development with our characters, but the cast does deliver, and there are plenty of solid performances to watch. It’s a film that could have benefitted from more development and suspense, but in the end, it doesn’t matter a whole lot; you can already expect to see constant reruns on TBS or TNT in the future.