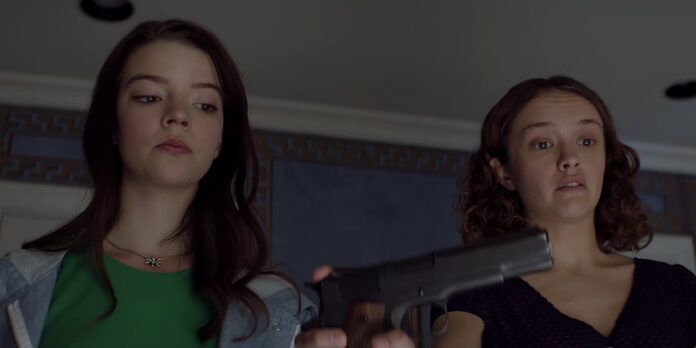 THE STORY – Two upper-class teenage girls in suburban Connecticut rekindle their unlikely friendship after years of growing apart. Together, they hatch a plan to solve both of their problems — no matter what the cost.

The youth of today are smart and they’re taking action. They’re fed up and just like Howard Beale said in “Network,” they’re “mad as hell” and they’re not going to take this anymore. Frustrations finally reach a boiling point for Lily and she decides to take action to correct the one thing that is hindering her growth and happiness. However, in playwright Cory Finley’s directorial debut “Thoroughbreds” the solution to the problem and is murder and the manner in which Lily goes about it leaves one with a sour taste in your mouth. It’s meanspirited, severe and self-entitled on the part of Lily, leaving us to wonder if such an action, feeling or character is even worth cheering on, to begin with.

Lily (Anya Taylor-Joy) is an upper-class teenage girl in suburban Connecticut who is reluctantly tutoring her once childhood friend Amanda (Olivia Cooke), who is a bit of a recluse and oddity due to her inability to express emotion. It is clear that the two girls still care for each other despite years of growing apart but what brings them together is Lily’s half-joking, half-serious proposition to kill her stepdad (Paul Sparks). Hoping to help each other but unable to do the deed themselves, they gain the help of a local, older, small-time drug dealer (Anton Yelchin) to do the deed for them.

I want to first come right out and say that my main criticism with “Thoroughbreds” is the writing of the character Lily and how she is portrayed by Anya Taylor-Joy (“The Witch” and “Split“). Polite, mature, smart and yet not entirely believable she is contrasted by Olivia Cooke who on the contrary is blunt, offputting and a fascinating character due to her inability to connect with others and display any form of feeling. Lily is a representation of what is wrong with today’s youth and I cannot say it makes for a pleasant viewing experience, to see how this rich and entitled person could decide that the only way for her to forge her own path through life is to murder another human being, even if he is not her real father and even if he does not fully care about her. The two are rounded out by Anton Yelchin, who tragically died last year and this represents his final on-screen role. Here, he is playing a charismatic drug dealer whos anti-authority and entrepreneurial attitude has gotten him in trouble before and lands him in even bigger trouble when he gets hooked up with Amanda and Lily’s plan to murder Lily’s father. Watching him on screen is tough, for even in such a limited role, you can see the brilliance in his work and the possibilities of what could have been had he not been taken away from us so soon. The film belongs to Olivia Cooke though who has the more sympathetic and I’d say, the more difficult role of the trio of young actors. Amanda’s relationship with Lily is a complex one that both fascinates in its complex emotion and infuriates as we get to the third act and the credit for that goes towards Olivia Cooke and the depth she brings this seemingly depthless character.

Director Cory Finley keeps things interesting throughout the duration of “Thoroughbreds,” even when it starts to slog here and there with smooth and long tracking shots through the expansive house, a slick and quick sense of pacing for the dark dialogue and a percussive score featuring ticks, clangs, taps and bangs which help to give the film a unique identity. His playwrighting background definitely shines through in his focus on character and allowing the actors to explore the subtext of a scene. Though the plot might be light within “Thoroughbreds” and its morals may be somewhat muddled, I’d recommend seeing it for Olivia Cooke and the final on-screen performance by Anton Yelchin, plus the arrival in a new and distinctive voice with writer/director Colin Finely.